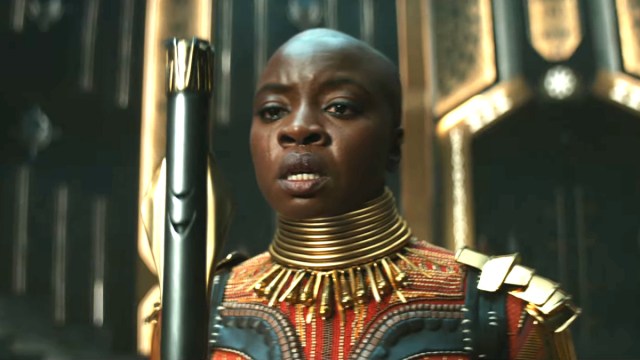 It’s been a big weekend for the Marvel Cinematic Universe, with Black Panther: Wakanda Forever surprising nobody by busting its fair share of blocks during a record-breaking first weekend in theaters.

There’s more going on than just Ryan Coogler’s sequel, though, with Emily Blunt continuing to die a little on the inside every time a certain reboot is mentioned, while David Harbour drops some brand new and potentially incendiary information on Thunderbolts.

Nobody cares for the most pointless Black Panther: Wakanda Forever subplot

It came as a shock, but also an unexpectedly unassuming piece of connective tissue, for Black Panther: Wakanda Forever to reveal that Martin Freeman’s Everett Ross and Julia Louis-Dreyfus’ Contessa Valentina Allegra de Fontaine used to be married, even though we weren’t left wondering why he didn’t take her name.

However, fans have been blasting a subplot that adds little to the movie as a whole, with many firmly of the belief it could have just as easily been saved for another project. Given where Ross was the last time we saw him in Wakanda Forever, we’ve got a sneaking suspicion that this unwelcome thread could be tugged at again in Secret Invasion or Thunderbolts, perhaps both.

There surely has to have been at least one argument in the Krasinski/Blunt household over the MCU, with the former’s debut in Doctor Strange in the Multiverse of Madness only increasing the number of times the latter is being asked if she’s planning to join her spouse in the superhero franchise.

Sure enough, Blunt was posed the Sue Storm question once more while promoting Prime Video’s rootin’ tootin’ Western The English, and you can almost feel her speaking the words through gritted teeth at this stage. Maybe she’ll be the Invisible Woman, maybe she won’t, but she’ll be thrilled either way when the casting is confirmed.

Thunderbolts planning to drop a bomb on the MCU, but is it figurative or literal?

David Harbour playing an ass-kicking Santa Claus, a key figure in one of the biggest TV shows on the planet, and an instant fan favorite in Hollywood’s most talked-about property means he’s become an expert at answering questions without giving anything away, but the Violent Night and Stranger Things star did admit Thunderbolts will “drop a bomb” on the MCU.

Given that he’s part of an antihero group who’ve all done some sketchy things in the past, he could be talking figuratively given their respective backgrounds, but he could also be talking about the mythology as a whole seeing as Thunderbolts is followed by the relatively standalone Blade and Deadpool 3 before Fantastic Four leads right into Avengers: The Kang Dynasty.

In the space of just three days, Black Panther: Wakanda Forever‘s mammoth $180 million haul at the box office was enough to both smash the previous record for the highest-grossing November debut, but also take the MCU sequel past the cumulative total Dwayne Johnson’s Black Adam had managed to earn in four whole weeks.

While Marvel outstripping DC in the moneymaking stakes is hardly groundbreaking news, it has opened up the discussion as to whether the Man in Black’s long-awaited (as in, 15 years in the making) debut has proven to be a bust.

Another day, another $180 million MCU dollars, but make sure to check back tomorrow for the latest Marvel news.