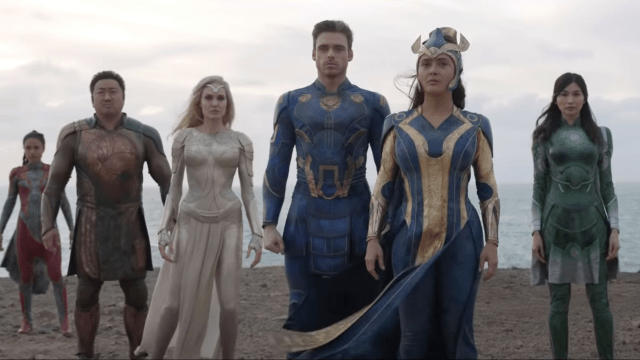 We may have gotten a flash of text reading “Eternals will return” after that tense post-credits scene with Kit Harington, a magic sword, and Mahershala Ali’s voice, but that was before the film managed to nab the unsavory distinction of being the worst-reviewed film to ever come out of Marvel Studios, with the moldy cherry on top being that it’s the only film to be certified “Rotten” by critics on Rotten Tomatoes.

Having hit such a low with Eternals, some were skeptical as to whether this would be the end of the line for Sersi and company, especially Druig actor Barry Keoghan, who has on multiple occasions been quite vocal over the lack of news surrounding the MCU’s most obscure team.

Thankfully, Keoghan and his fellow immortal aliens can breathe a little bit easier now, as Marvel Studios Vice President of Production for Marvel Studios Nate Moore confirmed in an interview with ComicBook that the Eternals haven’t run their last course.

“I don’t want to spoil anything, but we have not seen the last of those characters,” said Moore. It may not be the most substantial reassurance, but having it come from a higher-up in the studio adds all the weight we need.

Of course, it was hard to imagine a world without the heroes in the first place; Druig, Makkari, and Thena were last seen recruiting Eros, a fellow Eternal and the brother of Thanos, in the far reaches of space, whilst Sersi, Phastos, and Kingo were kidnapped by Arishem, who vows to destroy humanity if the trio’s memories show anything but worthiness from the human race. Given the cosmic parameters of that threat, perhaps Arishem and the rest of the Celestials are being saved for another saga, hence the relative radio silence surrounding the Eternals.

In the meantime, Moore has been hard at work producing Black Panther: Wakanda Forever, the inspired swansong to the MCU’s Phase Four, which will release in theaters on Nov. 11.