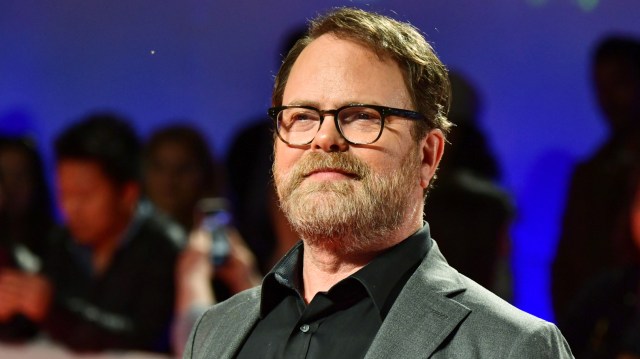 One man is more than ready to rain on Don’t Worry Darling’s parade.

With all the drama that’s drenching the lead-up to the actual film, Rainn Wilson has declared already that he’d like to make a movie about everything surrounding and leading up to the film, because that has a chance to be even more enthralling and thrilling than the actual movie (which continues to get rather poor reviews).

Wilson will take on the role of Chris Pine, and he’s cleverly come up with a witty title to take on the actual film — Worry, Darling.

The man who once played Dwight Schrute on The Office took to Twitter to announce the project, although the small detail of finding funding and folks to play Olivia Wilde, Florence Pugh, Harry Styles, Nick Kroll, and the rest of the cast still remains.

The tweet is already approaching 50,000 likes with scores of fans chiming in on who they’d like to play, and who they’d like to see take on the other roles. The fact that the film has been building record-breaking presales leading up to it hitting theaters, and the fact that that is surely tied to all the melodrama around the cast and director, means there is definitely an audience for a film about the film to get made one day.

Of course, the alleged loogey that Styles spat at Pine needs its own role, according to many that chimed in.

To quickly recap, the film is Wilde’s second effort at directing behind the camera. And chaos apparently ensued during filming (and maybe before and after). Wilde and her leading actress, Pugh, reportedly did not get along very well, not at all. Shia LeBeouf was nearly in the movie, and there is debate between the director and actor about how exactly he left the film and whose decision it really was.

Wilde declared that she kicked him out of the film, to which LeBeouf posted a video from Wilde in which she seems to be trashing Pugh, calling her Miss Flo, a moniker that the actress and her fans have now flocked to.

During press appearances for the film, many fans have pointed out that Pine looks disengaged, even totally oblivious to what’s going on around him with spaced-out looks and glares.

Then there’s the reception of Styles’ performance on screen, which, um, has not been called Oscar-worthy, to say the least.

Add on top of that the fact that Wilde and Styles (#WildeStyles) had or have a budding romance, Wilde was served custody papers via a proxy from her ex-partner Jason Sudeikis, and even Styles giving Kroll a big ‘ole smooch, there is more than enough material for a film about the film.

The movie has already had its red-carpet premiere (where some of these things took place), with the advance screening coming Sept. 19 before it will appear in movie theaters across the land starting on Sept. 23.

We’re pretty sure Wilson can take on the bizarre and weird, with his role as Schrute in the past and his current film, Weird: The Al Yankovic Story now playing and getting some pretty favorable reviews, maybe even more so than Don’t Worry Darling.

We do love one suggestion to somehow get John Krasinski involved as well, maybe growing out his shaggy locks once again in order to play Styles.

Whether you want to tune in to the film to see what all the fuss has been about, or you want to wait it out and see the behind-the-scenes movie that Wilson has in mind, it’s not clear that anything can live up to what’s been going on off-screen all this time.

In the meantime, you can hear Wilson on the podcast Metaphysical Milkshake, which he cohosts with Reza Aslan, or you can preorder Wilson’s upcoming book, titled Soul Boom: Why We Need a Spiritual Revolution — but there’ll be a wait there, too, as it doesn’t come out until April 25, 2023.

Regardless, there’s plenty of inspiration out there, even from Wilson himself, for those that want to get involved in Worry, Darling.