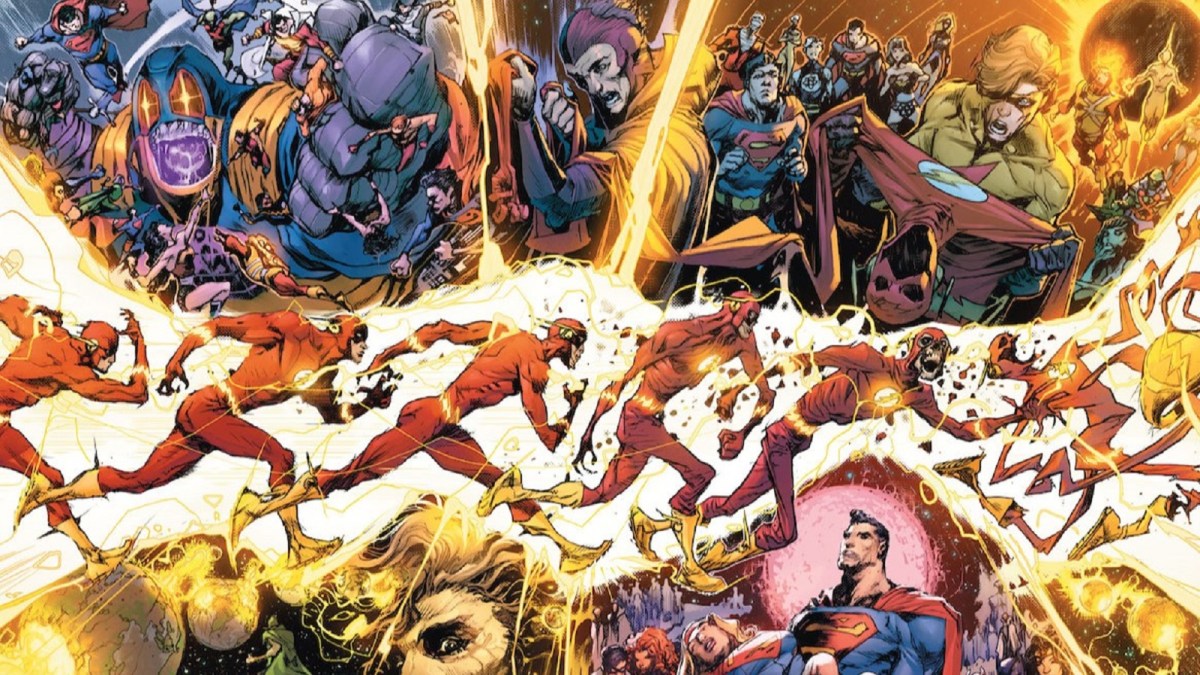 The DCU is being completely upended. Henry Cavill’s time is over, Jason Momoa could ditch Aquaman, there’s a huge question mark next to Gal Gadot’s name, and both Ben Affleck and Ezra Miller are almost certainly out of the Justice League picture. Yet, we still have two more Snyder-verse movies on the 2023 schedule. What gives?

Those films could be ground zero as James Gunn once and for all lays the Snyder-verse to rest and establishes the all-new DCU. What better way to close the book on Snyder’s DCEU than with a grand finale that could link everything together: multiversal adventure flick, The Flash?

Only two months ago, it all seemed so promising. James Gunn and Peter Safran were set to take the reins at DC Studios, and Cavill was back as Superman. There was even word that Warner Bros. Discovery had greenlit two Man of Steel sequels.

In the blink of an eye, it all came to a screeching halt. With so much potential and excitement, who would have known that Cavill’s Black Adam cameo would be our last chance to see him as Superman?

As Gunn and Safran chart the 10-year course for the all-new, all-different DCU, it would seem the pair are phasing out the Snyder-Verse entirely, which means recasting the Justice League for the new era, something that appears to have been at work prior to DC Studios’ rebranding.

One way or another, it all comes down to the Flash

It’s easy to forget that the recasting gossip actually began well before Gunn pulled up a chair at the head of the DC table. Earlier this year, rumors began to swirl that Ezra Miller was on the chopping block, and who could blame WBD for considering that move? The controversial actor has been embroiled in multiple legal issues with many serious accusations being tossed about. Things were so bad that the entire Flash movie was left in doubt.

Just when it looked like the beginning of the Snyder-verse’s end was in sight, Dwayne “The Rock” Johnson convinced the WBD brass to rehire Cavill, resulting in that magical Black Adam cameo. Johnson then promised much more Superman-Black Adam in the near future, leading to reports of the aforementioned Man of Steel sequels. In turn, it appeared the Snyder-verse legacy would remain for the foreseeable future.

As soon as Gunn took over as the creative lead for all things DCU, the rumor mill churned into overdrive. It began with the famed writer/director sharing a picture of Lobo as his first post on Mastodon Social. Then Momoa teased a dream project that he and Gunn had been discussing, thus leading to speculation that he was ditching Aquaman for “The Main Man.” Many an eyebrow was raised, especially since Aquaman: The Lost Kingdom was still on track for its 2023 release date. That left Snyder-verse fans cautiously optimistic that the Justice League cast would still be part of the future DCU in some fashion. Then came Wonder Woman 3.

Only last week, news hit the wire that WW3 was officially canceled, and the online back and forth between writer/director Patty Jenkins and WBD is still raging. Despite Gunn proclaiming that WW3 could still happen with a different director, Snyder-verse fans are wondering if Gadot’s time as the iconic Amazonian has come to an end. Soon after the project was axed, Gunn took to Twitter with some cryptic answers that only fueled the Wonder Woman recasting speculation.

He neither confirmed nor denied recasting Wonder Woman, responding in a series of tweets that there would be an “unavoidable transitional period.” Taking that into account the recent Cavill news, it would seem the writing is on the wall.

Will there be a new Justice League?

There is plenty of gossip on that very subject, and the latest developments point directly to a recast Justice League in the DC future. After all, Gunn is rebooting the Superman franchise, saying the story will focus on a younger Man of Steel just beginning his life in Metropolis. Since that’s the case for Superman, it stands to reason that every franchise is getting a much-needed mulligan. Yet, there’s still so much we don’t know.

When WBD announced that a third Wonder Woman movie was no longer in development, the first inclination was that Gunn wants to completely restart the franchise. However, the latest news is that he had no part in the decision and that it came down to a conflict between Jenkins and the WBD executives, meaning that WW 3 starring Gadot may still be possible with a different director.

If Gadot is still in as Wonder Woman, that would indicate that other members of the 2017 Justice League cast remain possibilities as well. Then again, nixing Cavill’s return as Superman doesn’t bode well for his fellow JL actors.

Basically, since 2017, which feels like so much farther behind us than five years, The Flash has been the proverbial hot potato of the DCU. It was initially greenlit before the JL theatrical cut was released. When that movie tanked, The Flash was on hiatus. There were years before WB announced that it was creatively moving again with the additions of two different Batman actors, Michael Keaton and Ben Affleck. After that, the release date was slid around, and rumors of the entire movie being canned due to Miller’s legal woes started to surface, leaving everything in doubt.

At this point, a complete universal reboot seems likely. Despite fan outrage over Cavill’s exit, it would be a welcomed concept. After so many miscues and bad decisions across the DCU, giving the new co-chairs a clean slate from which to build the foundation of a cohesive, shared universe would be for the best.

Still, it raises questions around The Flash. There have been claims that Flash and Aquaman 2 were deemed untouchable when Gunn and Safran took charge. However, if there had been talk of trashing The Flash along with a planned DCU restart, why not give it the Batgirl treatment? It could very well be that this film is important for the next wave of films and television. Judging by The Flash’s comic history, his solo movie would be the perfect place for a reset button.

If this were Marvel, all bets would be off when it comes to the comics. In fact, it’s been reported that Disney/Marvel consider comic fandom a red flag when they’re hiring writers and directors. Considering Gunn’s public displays of affection for all things superheroes, we can assume that he would be much more likely to pen a love letter to the comics via a major motion picture. With that in mind, there’s multiple Flash-centric stories that could allow for a massive, universe-level reboot.

It has been well established that the Speed Force allows for all sorts of time and interdimensional travel, and it almost always has overarching consequences. There’s an entire Reddit thread devoted to just that subject.

After Barry Allen’s supposed “death” in Crisis on Infinite Earths, he didn’t return to the comics for two decades. The in-story explanation was that he was trapped in the Speed Force. In fact, when he reappeared, it was to help drag Superboy Prime to a parallel Earth with artificial red sunlight that would drain his powers. During Barry’s time away, it’s been suggested that he traveled to the Marvel Universe, so the Speed Force can literally take him anywhere, making it the perfect plot device.

Then there’s time travel, and this is the most likely scenario for a hard reset. For those keeping score, the original title for Flash’s movie was rumored to be Flashpoint. In 2011, Geoff Johns did a reboot on the entire DC Comics Universe with Barry serving as the catalyst. To save his mother, who was murdered when Barry was a child, and to keep his father from being wrongfully sentenced to prison, Flash used the Speed Force to travel through time and change the past. In true sci-fi, time-travel fashion, his actions may have rescued his parents from their horrible fates, but he doomed the entire planet. Kal-El never became Superman; instead he was captured by government agents, who locked him in a lab. Bruce Wayne and his mother were gunned down in Crime Alley, paving the way for Thomas Wayne to become a sadistic Dark Knight.

The real kicker was the war between Themyscira and Atlantis. Aquaman and Wonder Woman ruled their kingdoms rather than becoming superheroes. After Mera discovered the two had an affair, she took action against Diana, who beheaded the Queen of Atlantis. It sparked a global war that had the world on the brink of annihilation. Barry has some adventures in the Flashpoint timeline before going back in time to allow his mother’s murder to take place. When he returned to the main timeline, it was effectively reset and replaced with DC’s polarizing New 52 comics line.

Put down your pitchforks, Snyder-verse loyalists

With the shocking news that Cavill is no longer Superman came a wave of backlash against WBD, specifically Gunn. Fans are calling for him to be fired and replaced with Zack Snyder. As disappointing as it is to see Cavill pushed away, it’s time for something fresh and new. Gunn has a proven track record, plus he’s a true comic book fan. Whether you loved or hated the Snyder-verse, the truth is that it didn’t compete with Marvel, and that’s the ultimate goal. Before demanding Gunn’s head, how about we give him a chance to succeed and see what happens? It can’t be much worse than what we’ve already seen.

We’ve said this before in regards to the DCU, but there’s so much potential for a fantastic shared universe. Having such a wealth of stories and characters that date back to the 1930s, the options are near limitless on a scale Marvel can’t touch. WBD has dropped the ball time and again. What better way to establish that things are going to be different than by completely starting fresh?