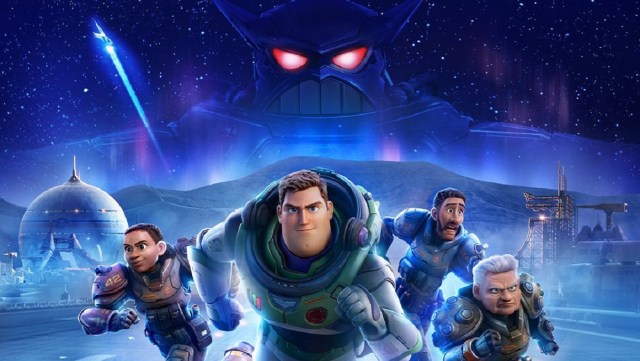 Lightyear stars Chris Evans and Keke Palmer are celebrating the Toy Story spinoff film’s arrival on Disney Plus in less than a week.

The Pixar animated Lightyear — which is touted as the mid-‘90s movie within the movie of Toy Story that inspired the toy of Buzz Lightyear — features Evans as the titular Space Ranger and Palmer as Izzy Hawthorne, a new character who is a leader of a ragtag group of space cadets.

“We’re so excited for you to see our epic space adventure. Lightyear will soon be streaming on Disney Plus,” the bubbly Palmer said in a promotional clip posted on the official Disney Plus Twitter account.

Evans and Palmer then proceed to “give you the film synopsis at the speed of light.”

What follows is a summary of the film’s plot read by Evans and Palmer at such a machine-gun-like pace, that it would make Eminem proud.

We’re not surprised Disney is pushing audiences to go and watch the film on their streaming platform since the movie reportedly somewhat underperformed at the box office and with its critical reception, especially compared to the high bar Pixar has set with their filmography, overall.

However, that’s not to say the movie is a total loss. For instance, Lightyear still boasts a commendable and “certified fresh” critical score of 75 percent on Rotten Tomatoes. The audience score is even higher, at 84 percent.

In our own review of Lightyear, we wholeheartedly recommended the film to viewers for its “emotional journey through time and space” which as serves as “a reminder that we’ve got so much beauty and joy around us, if we remember to slow down and take it all in,” as We Got This Covered writer Ashley Marie wonderfully put it.

Let Lightyear take you to infinity and beyond when it arrives on Disney Plus on August 3.