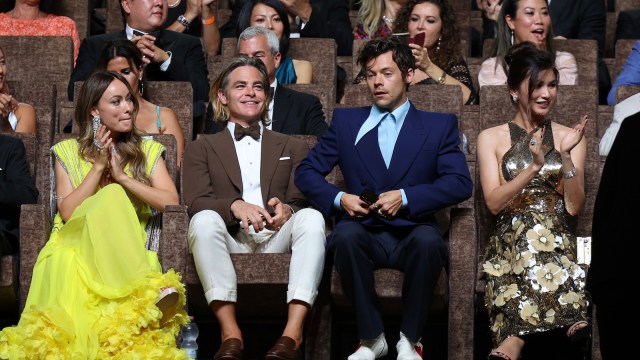 So far, the Don’t Worry Darling Venice premiere has been fraught with attention-getting weirdness and meme-able drama most of which is thought to derive from behind the scene drama between different cast members including Shia Leboeuf — originally cast to play Styles’ role — and director Olivia Wilde. Things got even weirder when Styles appeared to have spit on Pine as he was sitting down for the premiere although Pine has dispelled the rumor as conjecture and misunderstanding.

However, even though Pine’s reps have stated that the two men bear each other “nothing but respect,” the look on Pine’s face whilst his co-star was saying that his favorite thing about the movie is that it “feels like a movie” falls a little short of polite regard and more into the country of dissociative fugue.

The internet, which is already having a blast with the “only adult at the kid’s table” demeanor that Pine’s sported since the beginning of the festival, is already making hay of Styles’ seeming gaffe and Pine’s reaction, which some on social media are saying may have been the last straw before Pine began to actually will himself away from the reality of his situation.

In any case, if Pine is feeling trapped, his fans are more than willing to come to his rescue. Just let them know, Chris. Blink hard if you can’t speak, Chris!