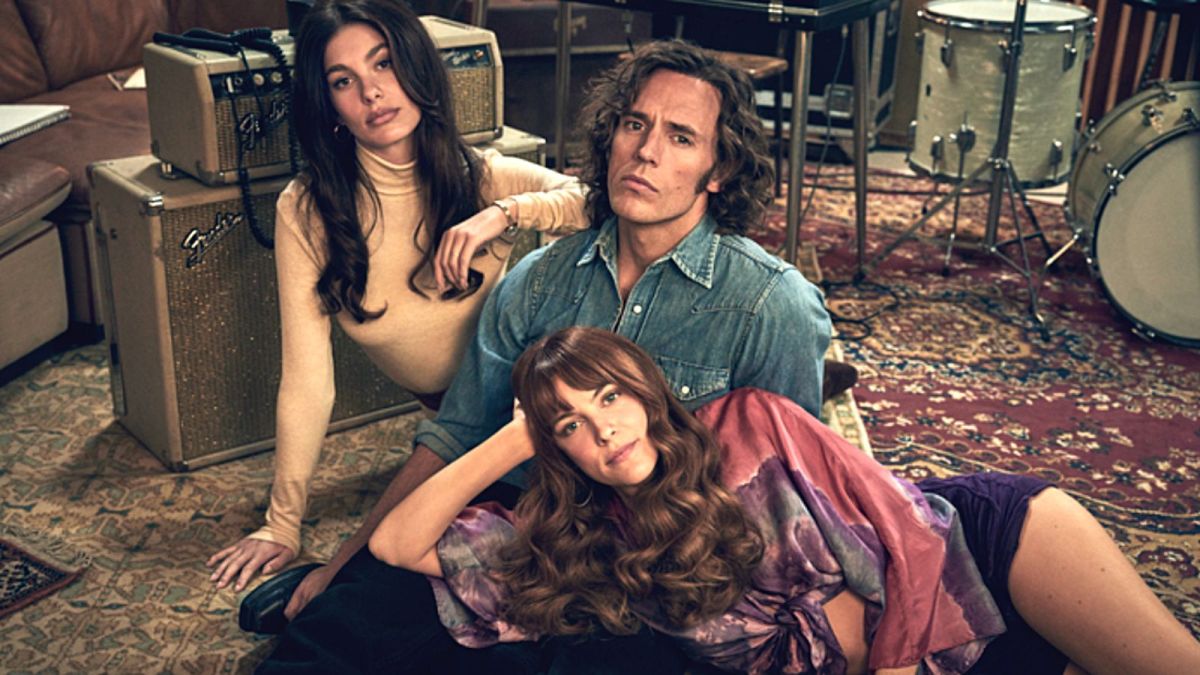 The Seven Husbands of Evelyn Hugo, Malibu Rising, Carrie Soto Is Back, Daisy Jones & The Six—with hit after hit, Taylor Jenkins Reid has become everyone’s favorite author. Studios and streamers are lining up to secure the rights to her books and bring the film or series adaptations to life. With a Malibu Rising series for Hulu and a Seven Husbands movie for Netflix still in the developmental stages, Daisy Jones & The Six will be granted the honor of being Reid’s first live-action adaptation.

The Amazon Prime Video mini-series is now in the final stages of post-production with the platform already starting to build momentum with a trailer tease. The story follows the career of a band in the 1970s from their breakthrough to their breakup as they battle showbiz threats like addiction, scandal, and betrayal.

Amazon has done a great job with casting for Daisy Jones & the Six, an endeavor which is always tricky in popular book adaptations, given the fans’ attachment to their own versions of the characters. Filled with starlets, here is what the cast of the upcoming Reid adaption is famous for.

Riley Keough is one of the most interesting and talented actresses working in Hollywood today. She has built her career on balancing big projects with indies that allow her to truly stretch her acting muscles.

Keough’s most prolific role was as Capable, one of the wives in Mad Max: Fury Road. However you might know her better from more important parts, like Sandy in 2020’s The Devil All the Time, which also stars Tom Holland and Robert Pattinson, or as Sarah in the 2016’s queer romance, Lovesong.

Most recently, the 33 year-old actress played Stefani in the wild Twitter thread adaptation, Zola, and Lauren Reece in the Chris Pratt-led series, The Terminal List. In 2017, she was nominated for a Golden Globe for her work in The Girlfriend Experience. Other credits include 2018’s Under the Silver Lake, 2016’s American Honey, and 2012’s Magic Mike.

Sam Claflin and Riley Keough are amazing separately, but Amazon will have hit the jackpot if their chemistry as a couple is equally fantastic.

Claflin had his big break as Finnick in The Hunger Games franchise, but he has had an interesting career trajectory since. After stealing hearts in everyone’s favorite 2010s rom-coms Love, Rosie and Me Before You, the British actor opted for more grounded films like 2017’s My Cousin Rachel, 2019’s The Corrupted, and 2021’s Every Breath You Take.

Recently, he has come back to the limelight with his stint as fascist politician Sir Oswald Mosley in Peaky Blinders and as Mycroft Holmes in Enola Holmes.

Camila Morrone is the breakout star of Daisy Jones & The Six. She has made a name for herself as a model in the fashion industry, but her acting career has been rather shy thus far. The Amazon Prime series will probably be the first you see of Morrone. Just in case her face looks familiar, her filmography includes 2020’s Valley Girl, 2019’s Mickey and the Bear, and 2018’s Never Goin’ Back where she played Jessie. You might also know her as Leonardo DiCaprio’s girlfriend after the two dated from 2017 to 2022.

Like Morrone, Suki Waterhouse also began her career as a model, but she is a triple threat. She will play a keyboardist in Daisy Jones & The Six, and her real-life musical experience will come in handy. Waterhouse released an EP, Milk Teeth, and an album, I Can’t Let Go, in 2022.

When it comes to acting, the 30 year-old has an extensive resume of minor roles. She played Claflin’s love interest in Love, Rosie, Marlene in The Divergent Series: Insurgent, and Cecily of York in the Jodie Comer-led series, The White Princess. Chances are, you have seen Waterhouse before in one of her 38 acting credits. She also has been Robert Pattinson’s girlfriend since 2018.

Veteran actor Tom Wright has 190 acting credits to his name. You probably know him best from Seinfeld, where he played George’s co-worker, Mr. Morgan, but he was also in 1990’s Marked for Death with Steven Seagal and 2002’s Barbershop. In case you’re a 1980s music fan, Wright starred in a couple of music videos for the band Cameo, namely “Attack Me With Your Love” and “Single Life.”

More recently, you might have seen the actor in the Netflix rom-com, That’s Amor, and television shows Station 19, True Story, and The Magicians. Wright will play a producer at Runner Records and the man responsible for bringing Daisy Jones into The Six.

The rest of the confirmed cast for Daisy Jones & The Six includes Nabiyah Be as Simone Jackson, Will Harrison as Graham Dunne, Josh Whitehouse as Eddie Roundtree, and Sebastian Chacon as Warren Rhodes.

Be’s most high-profile role was as Killmonger’s girlfriend, Linda Johnson, in Marvel’s Black Panther. Harrison played Zach Barnow in the CBS show, Madam Secretary. Whithouse is best known for his work in the movies Valley Girl, The Knight Before Christmas, and Modern Life Is Rubbish.

Chacon has acted in a number of TV shows and movies, among which are Penny Dreadful: City of Angels, Pose, Unbreakable Kimmy Schmidt, and Emergency.