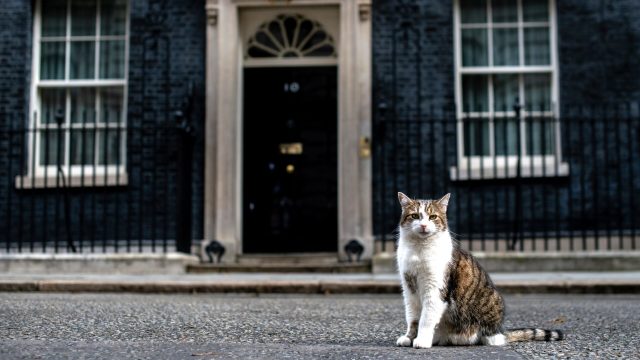 There is so much power to behold at the estate of 10 Downing Street, London, England, the likes of which few have ever witnessed. Standing proudly in the middle of the room is the powerful—and now trending—Larry the Cat, thanks to a viral tweet.

With a bow around his neck, the tweet proclaims that Larry has been promoted from mouse catcher to Prime Minister following Liz Truss‘ shocking exit.

Larry is a no ordinary cat. As the official Chief Mousser of 10 Downing Street, he has been on the job for 15 years. In that time, Larry has seen four prime ministers come and go. David Cameron was the first, followed Theresa May and Boris Johnson. His last of course, was the very short term of Liz Truss, who recently resigned. She had issues with the financial situation she found herself in and didn’t think she had the capability to pull the country out of it.

In a moment of instability, Larry the Cat took charge. With over 760,000 twitter followers alone, he has given the citizens of the United Kingdom hope for the future. He has had health issues, which he appears to have overcome. He has also been involved in scandalous distractions when a certain mouse caught his eye.

The citizens rally behind him, Larry is ready to take charge.