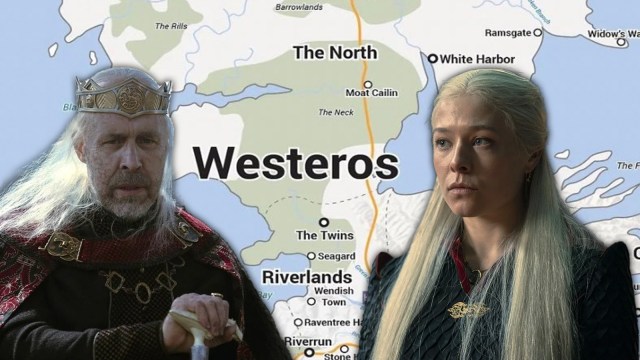 The House of the Dragon finale is just around the corner and the tensions in the Seven Kingdoms have reached an all-time high. As the Greens secure their position of power in King’s Landing, Rhaenys flies towards Dragonstone to warn Rhaenyra of their treachery.

These latest promo stills from the tenth episode – “The Black Queen” – showcase the formation of Rhaenyra’s war council. As Westeros prepares to dive into its darkest hour yet, fans wonder if the fictional world would benefit from its own Google Maps.

We’ve probably had enough of the Hightowers flaunting their influence in King’s Landing by undermining the law and taking advantage of Viserys’ passing to sit Aegon on the Iron Throne. Now, it’s time to travel to another part of the map and see what the Blacks have been up to all this time. In the released promo stills from episode 10, Rhaenyra, her sons, and the rest of the heir apparent’s council can be seen going through their options to try and choose the best course of action. This is the starting point for the infamous Targaryen civil war known as the Dance of Dragons, so make no mistake that we’ll be in for one explosive outing of a finale on Sunday night.

Did King Ciserys also ride a dragon in ‘House?’

In a lot of ways, King Viserys appeared to be a timid ruler, but no one would’ve been able to mistake that iron hold on his temper for anything bordering on weakness. That doesn’t mean Viserys wasn’t a Targaryen, though. In his youth, the king rode Balerion the Black Dread, Aegon the Conqueror’s dragon, and the largest of the serpentine creatures in history. Balerion was the undefeated monarch of the skies, and it speaks volumes about Viserys’ strength of will that he managed to tame him. Balerion died of old age shortly after, and Viserys never bonded with another dragon in his lifetime.

‘House’ fans reimagine the map of Westeros in Google Maps

One of the biggest staples of Game of Thrones as a high fantasy world is its usage of cartography. Since that first episode premiered more than a decade ago, the producers highlighted the importance of George R.R. Martin’s sublime worldbuilding by showing the world of Westeros on a scale model map. And while those iconic credits and the music score that followed them will forever live in our minds rent-free, we can’t help but wonder if the Seven Kingdoms would’ve benefitted from something like Google Maps, both for their residents and the franchise’s fans.

Well, wonder no longer, because someone has recreated the map of Westeros in Google Maps format and it’s certainly a surreal sight to behold. No force is able to fight modernity, least of all a grimdark world that desperately needs it.