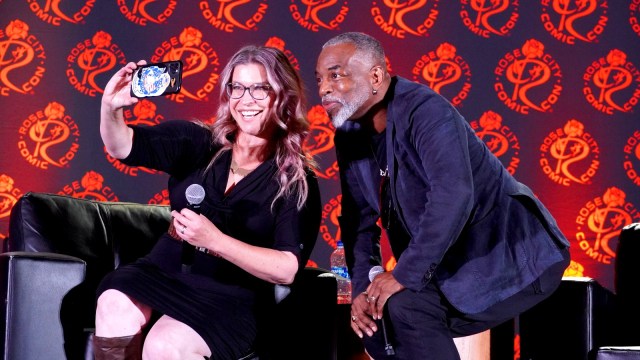 LeVar Burton is still good friends with the cast of Star Trek: The Next Generation to the point that all of his co-stars from the classic sci-fi show are in a group chat together.

Burton revealed who in the chat is the most prolific texter when he was grilled by Rose City Comic Con panel moderator Stephanie Stricklen in Portland, Oregon.

“Marina” was Burton’s response, which drew uproarious laughter from the crowd of fans who packed the ballroom due to the fact that he gave his answer extremely quickly after the question was asked and stated it so matter-of-factly. Burton, who played the engineer Geordi La Forge in the show, was referring to Marina Sirtis, the British actor who played the USS Enterprise’s Counselor Deanna Troi.

“She will blow up your phone?” Stricklen asked.

“She’s chatty. Well, she’s home now in England. And so she doesn’t initiate chats. So aside from Marina, I think it would be Brent. Brent can be chatty, yeah,” Burton said, referring to Brent Spiner, who played the android Data on Star Trek: The Next Generation.

Burton, Sirtis, Spiner, Patrick Stewart, Michael Dorn, Gates McFadden, and Jonathan Frakes — who all starred in Star Trek: The Next Generation and are all presumably part of the aforementioned group chat — will all be reunited on our TV screens once again when they are slated to appear together on the upcoming season three of Star Trek: Picard on Paramount Plus next year, with Burton specifically praising the “five-episode arc” that will unfold over the course of the season.

During that same Q&A panel, Burton likened the group to friends from high school who can still make each other laugh even after several decades have passed.

“The thing about the Next Gen cast and at the beginning somebody asked me what it was that made us what we are. And I think one of those things was we tend to make one another laugh, I mean, more than anyone else in our respective lives. There’s just something….it’s like being with, you know, your best friends from high school. Only now it’s more than 40 years later…it’s like 50 years later and every time we get together it’s as if no time has passed. We’re just a little more gray and a little slower but we still make each other laugh. And it’s just glorious being together.”

Check out Burton and others in Star Trek: Picard on Paramount Plus on February 16, 2023. And look out for Burton’s new game show, Trivial Pursuit, which he is hosting and producing, which is also expected to premiere sometime next year.