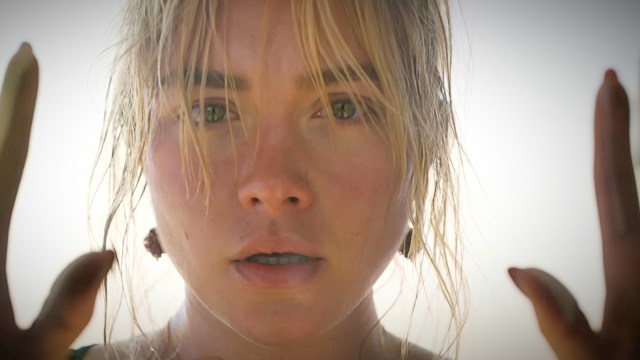 Don’t Worry Darling director Olivia Wilde had nothing but praise for Florence Pugh in the upcoming film.

Originally, Wilde was slated to play the main character, Alice, in the satirical thriller. However, the director now says she wouldn’t “want it any other way” than for Pugh to helm the lead role in Don’t Worry Darling, Wilde told the Associated Press.

“I think what Florence did with this role is singularly brilliant. This character is a heroine for the ages. And she, as an actress, is this rare combination of dramatically skillful, comedically brilliant and an action hero who can run like Tom Cruise. Like what actress can do stunts and pull off these incredible emotional acrobatics and do it so effortlessly in an accent that’s not even theirs? Like, come on. It’s like juggling upside down on the wing of an airplane.”

Don’t Worry Darling centers on a 1950s housewife who lives in a “utopian experimental community,” according to its IMDb synopsis. Throughout the film, Pugh’s Alice discovers that something sinister seems to be lurking underneath the surface.

The film’s saucy trailer, which was reportedly censored at the last minute by the Motion Picture Association, has already generated much discussion for Don’t Worry Darling. But beyond the content of the film itself, the gossip surrounding the purported behind-the-scenes drama amongst its director and stars has also “resulted in buzz you can’t buy,” as the AP article pointed out.

That has included the departure of actor Shia LaBeouf, who has publicly disputed Wilde’s claim that he was fired from Don’t Worry Darling. Instead, LaBeouf contends he quit the film.

There was some backlash from people on social media toward Wilde when a video surfaced that seemed to show her pleading with LaBeouf to rejoin Don’t Worry Darling. Still, LaBeouf has proven to be an unreliable narrator himself. Case in point, it was recently revealed he admitted to falsely depicting his father as physically abusive during his upbringing for the autobiographical film he penned, Honey Boy, in which he plays his own dad (LaBeouf now disowns Honey Boy). LaBeouf is also being sued by his ex-girlfriend FKA Twigs for alleged sexual assault, a claim which he denies.

The rumor is that Pugh had some kind of disagreement with LaBeouf during the making of Don’t Worry Darling. LaBeouf was eventually replaced with Harry Styles in the role of Alice’s husband, Jack.

Meanwhile, Wilde was delivered court papers while on stage at a film convention promoting Don’t Worry Darling earlier this year. The Manila envelope of documents was reportedly related to a custody dispute with her ex-husband, Jason Sudeikis, with whom she shares two children. Wilde is now reportedly in a relationship with Don’t Worry Darling star Styles.