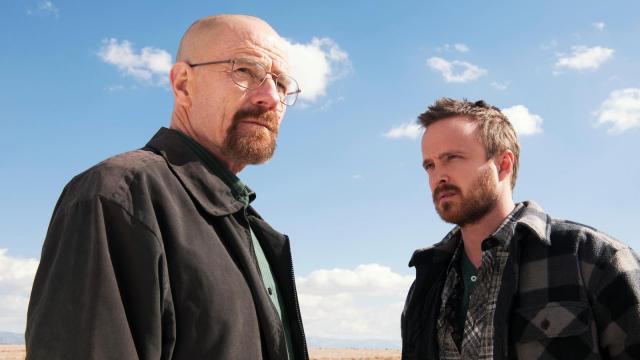 Crime and its fictional sibling do not often pay, but, for those on Breaking Bad, pretending not to be good has been lucrative and has earned Bryan Cranston and Aaron Paul statues in the city the show made famous people will be able to look upon for eternity.

An article published by Collider today reveals Sony will be unveiling statues of Cranston’s Walter White and Paul’s Jesse Pinkman at the Albuquerque Convention Center July 29. The show ran from 2008-13, has spinoff show Better Call Saul nearing its end, and creator Vince Gilligan says the works are something special, and he looks forward to giving back to the city after a decade there.

“[O]ver the course of fifteen years, two TV shows and one movie, Albuquerque has been wonderful to us. I wanted to return the favor and give something back. [T]hese larger-than-life bronzes of Walter White and Jesse Pinkman exist thanks to the generosity of Sony Pictures Television and the artistry of sculptor Trevor Grove, and I love them. It makes me happy to picture them gracing The Duke City for decades to come, attracting busloads of tourists.”

Cranston and Paul also say they are thankful their likenesses will be stored indoors and away from pigeons who may leave deposits on their heads otherwise, and Sony commissioned the statues in 2019. Mayor Tim Keller, Gilligan, Peter Gould, Cranston, and Paul will attend the unveiling ceremony and, for Sony Pictures Television representatives Jeff Frost and Jason Clodfelter, Albuquerque helped make the show the icon it is, and so it only makes sense to add to its picturesque landscape and livelihood.

“The city of Albuquerque played such an indelible and significant role in this incredibly iconic series. It is only fitting that statues of these two notable and renowned characters become a part of Albuquerque’s landscape as the city did for the series. We are so grateful to the city and people of Albuquerque for providing such a wonderful and picturesque home for Breaking Bad and these statues are a small demonstration of our appreciation. We can’t thank Vince, Bryan and Aaron, Mayor Keller, and the city enough for making this momentous event happen.”

Better Call Saul ends Aug. 15. It may not be the end of the franchise, though, as Gould says more could come in the right scenario, and AMC Networks President of Entertainment Dan McDermott says the company’s door is always open for more set in the world.