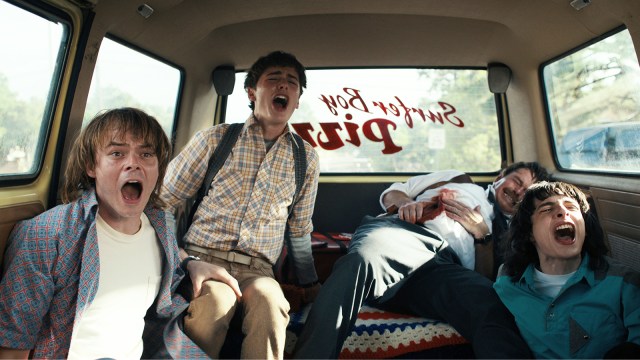 We’re officially less than 24 hours away from the conclusion of Stranger Things 4 after a thought-provoking and unforgettable fourth season left us all yearning for more. And after Vol. 1 entertained us with unforeseen twists, heart-stopping moments, and a lineup of character deaths, fans can hardly contain their anticipation for the final two giant-sized episodes that are guaranteed to deliver.

Stranger Things fans have unapologetically begun to congregate over on Twitter, where the colorful term “STRANGER THINGS TOMORROW” is trending as users express their excitement before the last two episodes drop tomorrow. Although, star Sadie Sink recently said that there’s just no way to prepare for the whole of season four — but folks are certainly going to give it a try.

One user joked about their excitement for Stranger Things 4 returning by posting an image of Squidward on a stretcher — and let’s be honest, we might all need a stretcher after the events in Vol. 2.

Another user posted a prayer circle for a handful of fan-favorite characters — namely, Steve, Robin, Dustin, Eddie, and Max — and fans are certainly scared that some of these characters could die in Vol.2.

One fan happily expressed their excitement for Vol. 2 but also acknowledged that we will once again have to wait a few years for the fifth and final season.

Other fans just kept it simple by letting their excitement out fully.

From what we’ve seen in the official trailer for Volume Two, the final two episodes are set to bring the intensity and chaos to our screens as we’ve never seen before. But, before Vol. 2 releases on Netflix tomorrow, July 1, make sure you get caught up on all that happened in the first set of episodes.