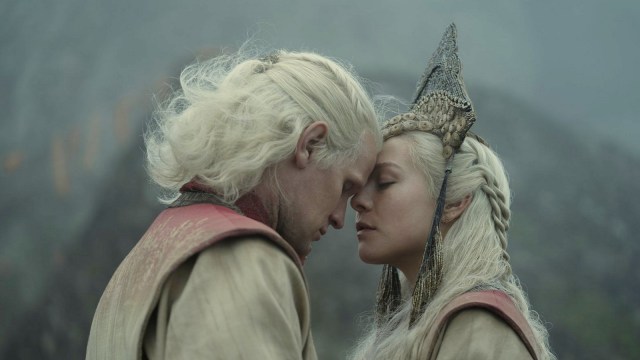 The following article contains spoilers for House of the Dragon.

As is the way with most finales, the last episode of the first season of House of the Dragon, left us with plenty of questions to ruminate upon while we wait for the second season. The factions have been divided, people are getting ready for the war to come, and things are about to get quite messy. So let’s take a look at ten questions that we’re asking after the House of the Dragon season one finale. It’s worth stating that we will not be wandering into any material that will spoil season two, and the following contains speculation only, unless otherwise noted, as any references to the source material Fire and Blood will be from events prior to season two.

Why did Rhaenyra send her children away from Dragonstone at the start of the war?

The most dramatic and gut-wrenching moment in the finale was when Aemond (Ewan Mitchell) and Vhagar descended on Lucerys (Elliot Grihault) and Arrax, killing both the dragon and his rider, but it’s worth pondering why Lucerys was in that position in the first place. Rhaenyra (Emma D’Arcy) and Alicent (Olivia Cooke) were on the verge of starting a war, so to gather their banners Rhaenyra sent Lucerys and Jacaerys (Harry Collett) away; Lucerys to Storm’s End and Jacaerys to the Vale and then to Winterfell. Why would Rhaenyra choose to send her two oldest children away, her heirs, when she knew that Alicent would be doing the same? Sure, she sent them away as messengers, telling them not to engage in fights, and hoping that the lords who sheltered them would not allow harm to come to them, but if she hadn’t sent them away Lucerys and Arrax would still be alive.

Speaking of Lucerys, Aemond’s reaction to his death seems to say that he was surprised by Vhagar’s actions. Before Vhagar swooped down and took a bite out of the pair, both Lucerys and Aemond were yelling at their dragons to stop being aggressive, with Aemond not wanting Vhagar to follow Arrax and Lucerys not wanting his small dragon to spit fire at Vhagar’s face. Ultimately the act of his death was an accident on Aemond’s part. Vhagar had acted impulsively, and Aemond could not control his dragon, much like King Viserys (Paddy Considine) had alluded to earlier in the season. But hopping on Vhagar and chasing Lucerys from Storm’s End was not an accident, so Aemond should be held responsible for his death.

How did Rhaenyra and Daemon find out about Lucerys’s death?

The lasting image they left with us in the finale was Rhaenyra’s grief-stricken enraged face as Daemon (Matt Smith) seemingly informed her of Lucerys’s death. But how did Daemon find out he died? It can be assumed that Aemond didn’t journey to Dragonstone on Vhagar to apologize for his role in Lucerys’s death. Thankfully, Fire and Blood does give us an answer to this one. However, we will not spoil it here in case you do not want to know, but if you are curious about how they found out about the boy’s death you can read about it here.

What role does Mysaria play in the Dance of the Dragons?

One character who was surprisingly absent in the last episode of House of the Dragon was Mysaria (Sonoya Mizuno). If you recall the last time we saw Mysaria she made a deal with Ser Otto Hightower (Rhys Ifans). Right after the meeting, he gave leave to Ser Larys ‘Clubfoot’ Strong (Matthew Needham) to rectify the situation, resulting in her domain being burnt down by Larys’ cronies. Needless to say that this most likely is not going to put her in the camp of the Greens like she might have been had Otto not acted so impulsively. Instead, she will most likely side with the Blacks and her former lover Daemon Targaryen, even though he got on her bad side. Either way their reunion next season should be interesting, if we get one.

Will Vermithor get a rider?

Midway through the final episode, Daemon ventures into one of the dragon’s lairs. This dragon is most likely Vermithor, the elder dragon ridden by King Jaehaerys, the King prior to King Viserys (Paddy Considine). This was after Daemon boasted to Rhaenyra that the Blacks were in possession of more dragons than the Greens, while Dragonstone had even more. Daemon is desperate to control all the dragons on Dragonstone, and he will probably become even more vehement about the situation after Lucerys and Arrax’s deaths.

But who will ride Vermithor? It could be one of Queen Rhaenerys and Daemon’s children who receive the second-largest dragon in Westeros. It’s unlikely that it could be one of the Greens unless someone were to break into Dragonstone and take it as Aemond did with Vhagar on Driftmark. Or it could be Rhaena Targaryen (Phoebe Campbell), after all, she does not have a dragon yet.

What will happen to Rhaena Targaryen?

Rhaena Targaryen, the daughter of Daemon Targaryen and Leana Velaryon (Nanna Blondell), was betrothed to Lucerys Velaryon before his death. She will undoubtedly be heartbroken when she finds out about his death, but it does prompt the question as to what exactly will happen to her. As mentioned previously, she is not currently in the possession of a dragon, so assuming she lives long enough, she will most likely claim one in the next season — she could even claim Vermithor. But there is also the question of who she might marry. She could be used as a bargaining chip for one of the Westerosi Houses who need a hand in marriage to come over to one side or the other. Let’s just hope she survives for now.

Will there be any more time jumps?

In the first season of House of the Dragon, there were multiple time jumps. Most of the time jumps allowed the production to recast actors to make the characters older with a major time jump recasting Rhaenyra Targaryen from Milly Alcock to Emma D’Arcy and Alicent Hightower from Emily Carey to Olivia Cooke. While the time jumps served to age up characters, they also changed power dynamics and moved the story forward. With that being said, will any of the future seasons have any major time jumps?

Will Winterfell be a major location in season two?

The beginning of House of the Dragon saw many lords and ladies across the many lands of Westeros unite in Harrenhal for the Great Council to decide who should be the heir to King Jaehaerys. While we were given a glimpse of these characters, the majority of House of the Dragon took place in King’s Landing, Driftmark, and Dragonstone with Storm’s End, the Stepstones, and the Vale making appearances. Naturally, fans have been wondering just how much we will see of the other locations in Westeros, like Winterfell.

At the end of the season, Jacaerys is sent to the Vale where he will treat with House Arryn but after that, he will venture to Winterfell to treat with Cregan Stark the Warden of the North and Lord of Winterfell. Because of how cherished Winterfell is among the Game of Thrones fan base, it is likely that we will spend more than an episode in Winterfell, as we see Jacaerys attempt to win the hearts of the Northmen and women he hopes to win for his mother’s cause.

Was season one just a setup for everything to come?

It could be easy to finish watching the first season of House of the Dragon and assume that everything in the first season was just setting up the Dance of the Dragons. With the time jumps and the seemingly low stakes that came with knowing that the Greens and the Blacks would be standing at the end of the season, it would not be wrong to say that the first season set up the Dance of the Dragons. However, we received the backstory that was needed to care about the Greens or the Blacks going forward. We also saw many character deaths, starting with Queen Aemma Arryn (Sian Brooke) and ending with Lucerys Velaryon.

When will season two of House of the Dragon be released?

The most important question for House of the Dragon fans is when exactly will we be getting more of it. It was recently revealed that the second season has not yet begun filming and that they would begin early in 2023. That would mean that we will either see the second season of House of the Dragon toward the end of 2023, or in 2024. So, unfortunately, we have a while to wait before the next season.

If you are curious about how the story might go, feel free to read the source material, George R. R. Martin’s Fire and Blood. Or you could just go back and stream the full first season of House of the Dragon which is now streaming on HBO Max.