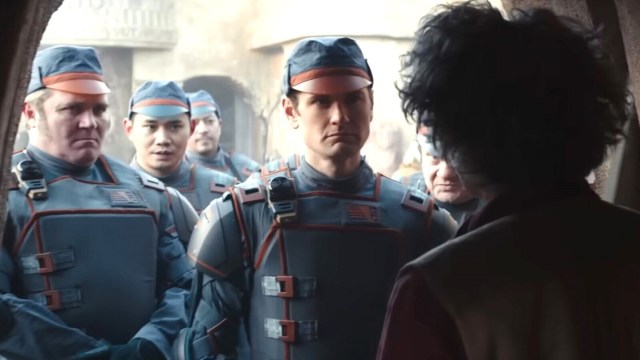 Andor just dropped its super-sized three-part premiere on Disney Plus this Wednesday and, just like all the reviews said, it’s definitely a stark departure from the previous Star Wars TV series we’ve seen. Carrying over the grim, murkier aesthetic from Rogue One, Andor feels much more mature and adult-oriented than perhaps every other entry in the saga. So it probably only makes sense that the show just achieved a foul-mouthed first for the family-friendly franchise.

In episode 3, Deputy Inspector Syril Karn (Kyle Soller) and his corporate troops from Morlana One have tracked Cassian Andor to Ferrix, but their ambush of the fleeing criminal doesn’t go to plan, as Andor and his friends manage to get the jump on them. Once things start to go against them, a flustered Sergeant Linus Mosk (Alex Ferns, recently seen in The Batman) utters a shocking exclamation. If you missed it, check out the tweet below for evidence:

“Sh*t, we’re under siege,” says Mosk into his comms, thereby earning the dubious honor of being the first ever character to use the Anglo-Saxon expletive in Star Wars history. Like fan account @clonehumor points out, it’s probably only right that this groundbreaking moment comes from a Scottish guy. Especially given that Andor is by the far the most British Star Wars has ever been.

There are some other subtler milestones filtered into these first episodes, including the franchise’s first implied sex scene between Bix (Adria Arjona) and Timm (James McArdle) in episode 2. Mosk’s swearing is much more on the nose, however, and sends a clear message to the audience that this isn’t the same Star Wars we’re used to seeing.

The 12-episode first (only?) season of Andor continues Wednesdays on Disney Plus.