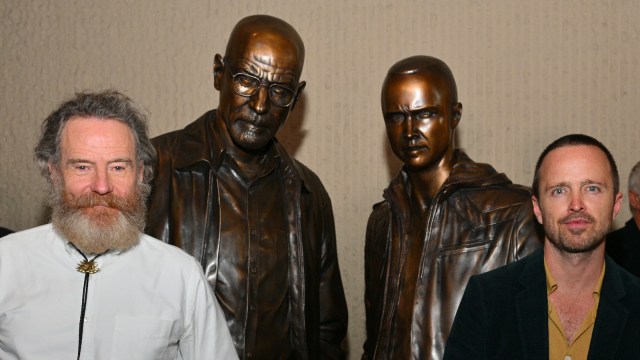 Better Call Saul has just seen its big finale, but it’s the show’s predecessor that has an army of conservatives incensed as the Breaking Bad statue has been called out for “glorifying” meth cookers.

Albuquerque recently unveiled a statue to Jesse Pinkman and Walter White as a tribute to possibly the most famous fictional characters in Albuquerque’s history. It’s all fun and games, with stars Aaron Paul and Bryan Cranston even popping up for the unveiling ceremony.

But not everyone is very happy about it, with local conservatives admonishing the Mayor for “glorifying meth makers” with the kitschy bit of bronze work. Conservative radio pundit Eddy Aragon told Fox News that it was “not the type of recognition” they want for Albuquerque or New Mexico.

Conservative state representative Rod Montoya feared that the city was “going down the road of literally glorifying meth makers?”.

Aragon in particular likened the situation to controversial historical figures having statues taken down, believing that the state was essentially endorsing “fictional, drug-dealing figures”.

“Now we’re putting fictional characters out in front. We have Jesse Pinkman and, of course, Heisenberg, and we have now erected statues and our progressive mayor from the city of Albuquerque has stood behind them. We’re funding those, so it’s OK to go get rid of real historical figures and now, somehow it’s even better, to [have] fictional, drug-dealing figures.”

In reality, it’s a bit of a stretch. When the statues were unveiled, Albuquerque mayor Tim Keller spoke of why they erected the statues, with him believing it was about paying tribute to a positive economic impact from the much-loved series.

“While the stories might be fictional… jobs are real every single day. The city is also a character… We see ourselves in so many ways, good and bad.”

Breaking Bad is currently available to stream on Netflix. You can watch the second half of Better Call Saul‘s final season on AMC+ in the U.S., but only until Aug. 23.