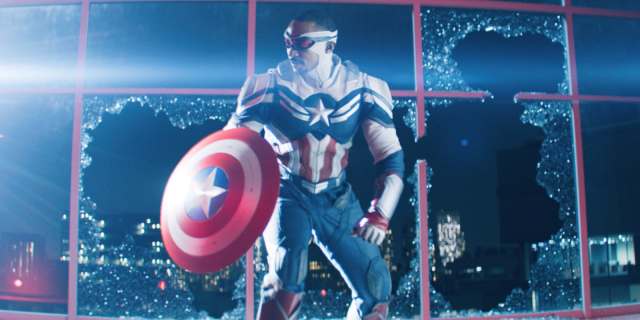 While Ms. Marvel has only appeared in the MCU during her own titular series, the character has now come face-to-face with more Avengers thanks to the Worlds of Marvel show on the Disney Wish cruiseliner.

Towards the end of the video portion of the experience, Ms. Marvel meets Anthony Mackie’s Captain America right after he and Captain Marvel assisted Ant-Man and The Wasp with taking out enemy Ultron robots.

When meeting Captain America, Ms. Marvel only has questions about Captain Marvel. The MCU newcomer only has a brief appearance in the footage, but fans get a ton of new shots of Captain America in his complete suit from the end of the Falcon and Winter Soldier series.

You can check out this clip of Captain America meeting Ms. Marvel at the 11-minute mark of a video shared on YouTube by user Jeremy Weed. For a better look at Captain America himself, head to 6:30 onwards.

The show is part of a Marvel experience available onboard Disney’s new cruiseliner Disney Wish. According to a blog post by Marvel, this ship will make its maiden voyage on July 14.

Alongside this meeting of heroes, the experience has plenty of other fun moments to offer including Ant-Man finally addressing the gross fan theory of how he could have taken down Thanos.

As for Ms. Marvel, the character titular Disney Plus show still has new episodes to arrive in the coming weeks on Wednesday before she makes her first MCU film appearance in The Marvels.