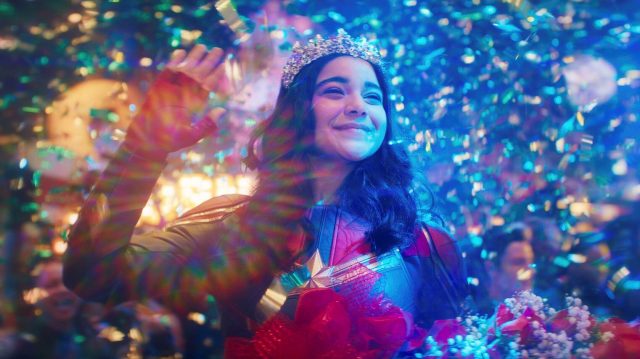 Warning: This article contains spoilers for the Ms. Marvel finale.

Ms. Marvel‘s season (we hope not series) finale ended on as jaw-dropping a note as can be, with Brie Larson turning up for a cameo as Captain Marvel. The episode’s post-credits scene has been blowing fans’ minds and also leaving them scratching their heads, as it saw Kamala Khan suddenly disappear from her bedroom only for Carol Danvers to take her place, with the cosmic heroine tumbling out of the teen’s closet.

Obviously, this tag sequence is teeing the two characters up for their incoming partnership in The Marvels, but maybe this moment actually dropped an even bigger reveal in a subtle — or not so subtle — way. Yes, Carol literally came out of the closet, but did she do so figuratively as well? Basically, was this Marvel’s method of confirming something that fans have been waiting years for: that Carol Danvers is part of the LGBTQIA+ community?

While Carol isn’t queer in the comics, fans rallied around this concept in the wake of Captain Marvel emphasizing Danvers’ friendship with Maria Rambeau instead of giving her a male love interest. In the time since, the desire to see Carol and Valkyrie become an item in the MCU has grown into a fully-fledged social media movement, as egged on by real-life pals Larson and Tessa Thompson.

Carol’s undoubtedly a gay icon at this point, then, but her scant few appearances since her origins movie have continued to avoid referencing her sexual orientation in any way — likewise, Thor: Love and Thunder disappointingly failed to give Valkyrie a queen. Nonetheless, we might be grasping at straws, but it doesn’t seem impossible that Marvel was deliberately alluding to something when they offered up the very loaded visual of Carol crashing through a closet door.

The MCU’s in a very different space from when Captain Marvel released in 2019, with its gay representation making some key strides — from Phastos having a husband and child in Eternals to Loki coming out as bisexual. So it’s entirely plausible that the Ms. Marvel post-credits scene was an implicit promise that The Marvels will finally confirm Carol’s own (assumed) queerness. At the very least, it’s given fans some renewed hope to cling onto until the Captain Marvel sequel arrives in theaters next summer.