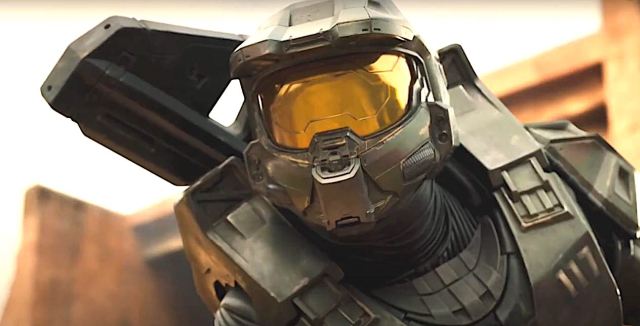 The much-discussed video game adaption Halo is returning for season two and promises more action and deeper storylines. In season one, John-117/Master Chief (Pablo Schreiber) and his Spartans fought the Covenant, violent aliens who terrorize civilizations like the Insurrectionist outpost on the planet Madrigal. The only survivor of this attack is a teenager named Kwan Ha (Yerin Ha) who finds herself caught in the middle of the conflict and tests Master Chief in ways he never expects.

The show received heaps of backlash due to changes from the source material and Master Chief taking off his helmet—something his video game counterpart didn’t do. Executive producer Kiki Wolfkill and Schreiber stood behind the decision, believing it was important to make the change to show the full range of emotions Master Chief has. The show’s been Paramount Plus’ most expensive one to date, and the series’ success is of the utmost importance to the streaming service.

The official Twitter account for the show made the Halo season two start-of-production announcement and confirmed it’s filming on-location in Iceland. In the photo is, of course, Schreiber as Master Chief, Natasha Culzac as Riz, Bentley Kalu as Vannak, and Kate Kennedy as Kai.

New to the cast is Joseph Morgan (The Vampire Diaries, The Originals) as James Ackerson, a career-minded United Nations Space Command (UNSC) intelligence operative, and Cristina Rodlo (No One Gets Out Alive) will play Talia Perez, a rookie linguistics specialist.

At the beginning of the series, Master Chief ventures inside a cave system and finds a Forerunner keystone. He touches it and mysterious symbols unlock his childhood memories (those in the Spartan program had their memories erased so this is a big deal). His mind begins to open, and he questions his superiors and the inner workings of his job. As he and the Spartans fight the Covenant, he must also fight for the truth and decide who to trust when Makee (Charlie Murphy), a human raised by the Covenant is found, who shares John’s propensity for visions.

The season one finale set up some major events for season two. Through the course of the series, John discovers that Dr. Catherine Halsey (Natascha McElhone) was the one who kidnapped children for the Spartan super-soldier program and experimented on them for the UNSC’s use. In the finale, John has broken free from his programming, and his Silver Team travel to the planet Hesduros to find Makee who’s stolen a mysterious artifact from Madrigal and an artifact from Eridanus II, John’s home planet.

In the climactic battle with the Covenant, the Silver Team is overwhelmed, and John has to rely on his artificial intelligence Cortana (Jen Taylor) to take control of him. With Cortana’s help, he fights them off and they’re able to secure the artifacts. However, his decision could come at a cost of John’s personality. He’s been fighting to break free this whole time, but season two could see a Master Chief who’s more mechanical than man.

During the last battle, Makee activated keystones that generated a blast and saved Master Chief. Consequently, a star map was generated that would lead to Halo, (these are ancient artifacts created by the fallen stellar empire known as Forerunners), but Master Chief was locked in stasis. Logically, this thread will continue when the story picks back up in season two and another confrontation with Makee, who he developed a romantic relationship with, is inevitable. Schreiber said in an interview with Deadline that season two would be a “very gritty” take on war, and they’re aiming for “authenticity” first and foremost.

The showrunner will change in Halo season two from duo Kyle Killen and Steven Kane to Dave Wiener. Schreiber shared what to expect from the new showrunner, noting that the most important thing to him is the writing and the material. He believes that the written material is being taken to new and exciting places and he’s ready to get back to work with his new collaborators. McElhone stated that a lot of lessons were learned in season one and that lots of changes and enhancements have been made for season two.

Halo season two will come out sometime in 2023. It’s likely to arrive around the time Halo season one premiered in 2022, which would be in the spring, but the official date will be confirmed once it’s announced.