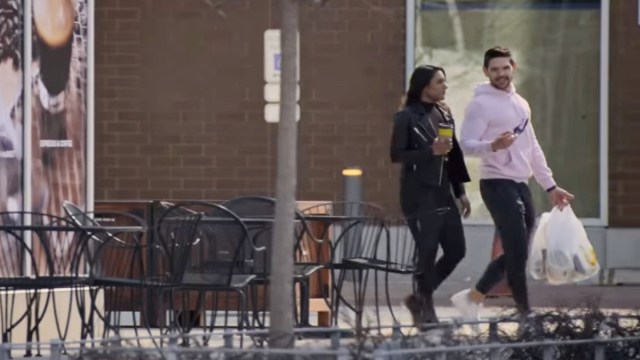 Love is Blind season 2 is now officially 0 for 3.

Heading into the “After the Altar” specials, fans already knew that the two season 2 couples who had gotten married — Iyanna and Jarrette and Danielle Ruhl and Nick Thompson — had already begin divorce proceedings before the episodes even aired. But hopeless romantics had another couple to ship, Kyle Abrams and Deepti Vempati, who had not chosen each other in the pods but had instead embarked on a will they, won’t they friendship since the reunion special aired.

By the end of “After the Altar,” Abrams and Vempati seemed like they were finally headed toward a serious relationship. But alas, the pair have since split ways. Abrams announced the sad news in an Instagram post on Monday evening.

“I understand many of you are curious as to where Deepti and I stand today,” the 29-year-old construction worker wrote. “Since ‘After the Alter’ [sic] was filmed, we decided to go our separate ways early summer. Thank you to everyone who has followed our journey through ardous vulnerability and has supported us along the way.”

“I have since embarked on a new relationship which I intend to keep private for a bit. As for what the future holds, I have no clue,” Abrams added. “Going forward I plan to live each day in the present without any regret.”

So much for their friendship.

Kyle had initially become engaged to 32-year-old hairstylist Shaina Hurley during their time in the pods, but broke up shortly after returning from Mexico. (Hurley in fact left him there and returned home by herself.) Deepti, on the other hand, had come precariously close to marrying 33-year-old veterinarian and noted cad Abhishek “Shake” Chatterjee, who notably did not appear in the “After the Altar” episodes.

“The biggest regret is I should have asked Deepti to marry me. That’s what I learned the most. I f*cked up,” Kyle said during the reunion special, causing fans to swoon. “I should have tried harder for you. I mean, I love her so much, she’s the best. And I wish I saw what was right in front of me. And I do — that’s why biggest regret. I’m sorry.”

Oh well. Upward and onward to season 3, we guess.