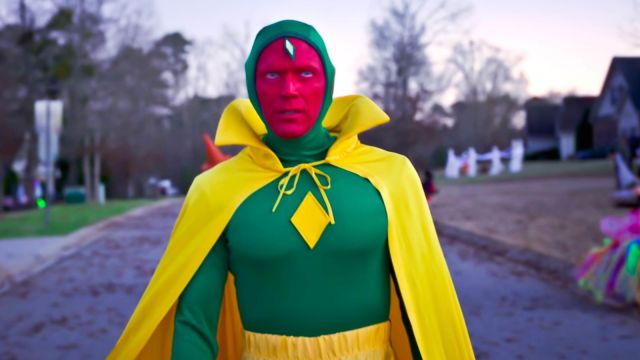 Disney Plus could remain the home for Vision for yet another series after reports of a solo series for the benevolent android hitting early development.

Paul Bettany’s Vision has been one of Marvel’s biggest triumphs in adapting from often silly source material, with the Marvel Cinematic Universe somehow making a green, yellow, and pink android seem immensely grounded and layered. Headlining WandaVision alongside Elizabeth Olsen, it looks like the android will return.

The rumored title for the series is Vision Quest, making it look like a fairly clear follow-up to WandaVision. The project ‘s alleged development stage was revealed on The Hot Mic with Jeff Sneider and John Rocha, with Sneider declaring the news to be “hard to deny” for Marvel.

The MCU as it stands only has one Vision currently confirmed alive, with S.W.O.R.D.’s version of the android currently somewhere out there following a philosophical battle with the “normal” Vision at the end of WandaVision. Considering What If…? saw Vision merge with Ultron, perhaps that’s a route being explored by Marvel to keep the stakes high.

Bettany himself has said he believes he’ll return as Vision, citing Kevin Feige always wanting to tie up loose ends. The Englishman said he didn’t know when that’d be, but sounded like an inevitability for him to take on the tights again.

There’s still a plethora of Disney Plus originals to come from the MCU, with the likes of Echo, What If…?, Ironheart, Moon Knight, and Daredevil: Born Again all to debut or return for second seasons over the coming years.