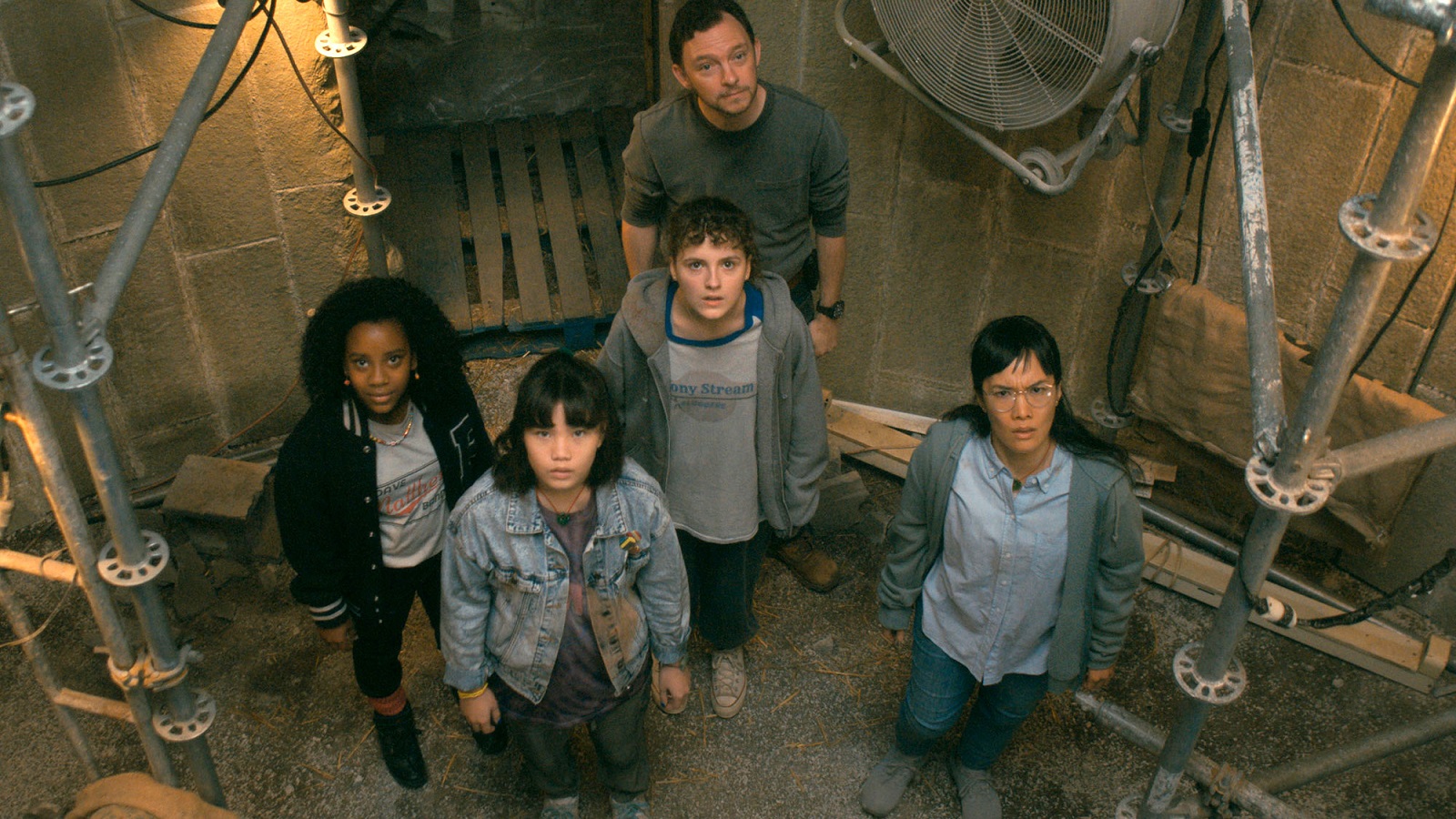 via Prime Video
Review of:

'Paper Girls' creator Brian K. Vaughan described it as 'Stand by Me' meets 'The Terminator', but throw in additional shades of Netflix's 'Stranger Things' and 'Dark', and you could be looking at the latest bingeable sci-fi streaming sensation.

Even though Prime Video’s new series Paper Girls is adapted from the comic book run of the same name by Brian K. Vaughan and Cliff Chiang, it was inevitable that comparisons would be drawn to Netflix behemoth Stranger Things for a number of reasons.

The story follows a group of teenagers in the 1980s who find themselves drawn into a multi-dimensional conspiracy that features pop culture references aplenty, ominous portals opening up in the sky, shady corporations trying to keep a lid on the existence of time travel, and the personal stakes that come with out-of-their-depth kids trying to prevent an apocalypse that only they know is coming.

It definitely has more than a few shades of Hawkins about it, not to mention the phenomenal Dark, but the first issue of Paper Girls was published nine months before the opening season of Stranger Things landed on streaming, so any similarities are coincidental. However, the fast-paced, fun-filled, impeccably-acted, and always engaging eight episodes will more than likely leave viewers crossing their fingers in the hopes that a renewal will be announced sooner rather than later.

The opening installment is the longest of the series, which is understandable when there are a great deal of plates to be spun all at once. Paper Girls kicks off in the early hours of the morning after 1988’s Halloween, when the titular foursome set off on their morning work routes, and swiftly stumble upon a time-hopping conflict that involves two warring factions battling across multiple periods in history.

On paper, the central foursome could easily come across as broad archetypes, but the performances of the young cast instantly let you know that each of them have a distinct personality, differing motivations, and unique set of quirks. Riley Lai Nelet’s Erin is on her first day as a paper girl, which she views as an escape from an overbearing mother who’d rather keep her wrapped in cotton wool.

Sofia Rosinsky’s Mac is the no-nonsense, foul-mouthed, chain-smoking badass of the group, Fina Strazza’s KJ is the rich kid hailing from one of their small town’s most notable families, while Camryn Jones’ Tiffany is the level-headed thinker. You’ve seen variations of these characters (especially in the arena of adventure-heavy teen-driven shows) plenty of times before, so it’s a testament to the talent that they manage to instantly put their own stamp on it.

Of course, this is a time travel caper at the end of the day, so the girls soon find themselves transported to 2019 by the end of the exposition-heavy premiere. In comes Ali Wong as the future version of Erin, completely abandoning her tried-and-trusted comedic persona in favor of a pathos-heavy turn that finds her 12 year-old iteration borderline disgusted with what she’s become.

Paper Girls doesn’t spend much time dwelling on the minutiae of its time travel machinations or the various paradoxes that could hypothetically emerge as a result, which is definitely for the best. Mac discovers her brother is now working as a doctor, a far cry from their troubled youth under the iron fist of an alcoholic deadbeat dad, and she becomes so enamored she wrestles with whether or not to try and ingratiate herself into his current existence, which raises all sorts of scientific, moral, and ethical questions.

KJ and Tiffany are also drawn in by the allure of discovering how they turned out, but it goes without saying the results may vary. That’s effectively the essence of Paper Girls in microcosm; it deals with universal themes of teenage dreams, hopes, and aspirations, before the crushing realization that comes in the future when none of those long-held desires have even come close to manifesting. It’s almost painfully relatable, but always entertainingly so.

Flitting between disparate time periods could have ended up becoming confusing, but a well laid-out narrative throughline ensures that it never becomes too complicated or difficult to follow, which is no easy feat when the leads set out across time to encounter and evade Adina Porter’s relentless adversary, Nate Corddry’s helpful exposition machine Larry, and the repercussions that invariably come with having so many characters breaking the cardinal rule of time travel by interacting with their future selves. Oh, and there’s also a giant mech, and even a dinosaur thrown in for good measure, just in case you were forgetting how heightened a fantasy Paper Girls really is.

Through it all, showrunner and executive producer Stephany Folsom wisely opts to keep the focus steadfastly on the four winning protagonists as they deal with the implications of going from a mundane morning paper route to outrunning intergalactic mercenaries, trying to find a way back to their own timeline, and dealing with the mundane complexities of early teenage life. It’s a hard balance to strike, the creative team pulls it off with a great deal of style, vigor, and panache.

Broad sci-fi trappings and real-world drama always make for a combustible mix, and while some of the tonal shifts can be a little disconcerting from scene to scene, refusing to sugarcoat any of the heated exchanges or timeless introspective interludes that anyone of any generation has resonated with at one point or another in their lives gives Paper Girls a harder edge than many of its contemporaries, which is naturally of immense benefit to viewer engagement, not to mention investment in the fates of the key players.

It would have been all too easy for the myriad of storytelling threads to be tied up in a neat-if-predictable bow by the end of the eighth and final episode, but it’s to the credit of Paper Girls that it gets increasingly ambitious in terms of scope, spectacle, and story as the series wears on. Sure, the conclusion is blatant season 2 bait, but based on how the opening batch of energetic adventures turned out, as well as how easily bingeable they are, we’d be more than happy to see it.

'Paper Girls' creator Brian K. Vaughan described it as 'Stand by Me' meets 'The Terminator', but throw in additional shades of Netflix's 'Stranger Things' and 'Dark', and you could be looking at the latest bingeable sci-fi streaming sensation.