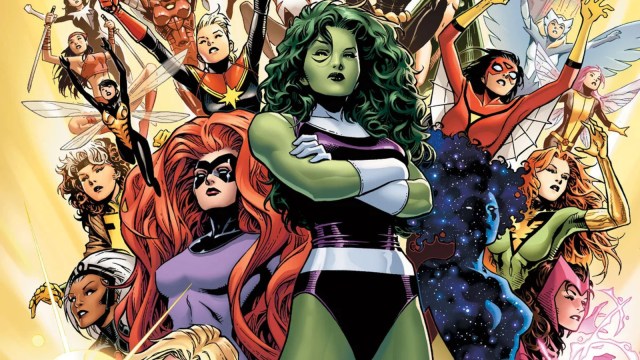 Marvel fans have been waiting to see the all-female Avengers group A-Force form in the MCU ever since those heroines-only team-up moments in Avengers: Infinity War and Endgame. With comic book team leader She-Hulk finally entering the franchise, though, the introduction of A-Force now feels a lot more plausible than it did before. So it’s encouraging to hear that Tatiana Maslany is more than up for the concept.

While speaking to Entertainment Tonight, Maslany was asked if she would ever want to join an A-Force team that consisted of herself, Brie Larson’s Captain Marvel, Hailee Steinfeld’s Hawkeye, and Florence Pugh’s Yelena Belova. As you would expect, the She-Hulk: Attorney at Law actress was ready to sign up there and then to make such a thing happen.

“Yes. Is this an offer? Cause that would be so much fun. I would love that, yeah,” Maslany said, on the topic of an MCU A-Force, before joking that Larson and the rest were actually hanging out behind the camera. “Come on out, everybody, we’re shooting it right now.”

As fans know, Ms. Marvel star Iman Vellani has used her position as part of the MCU to hound Marvel president Kevin Feige day and night about her own thoughts on the franchise. So does Maslany do something similar? When asked if she’s pitched an A-Force film to Feige, Maslany laughed off the idea, revealing that she and the exec usually geek out about old movies instead:

“Oh, boy, no way. We nerd out about movies. When I talk to Kevin, it’s like, we talk about movies that we watched from the ’80s or, you know, horror movies in the ’70s, like that’s what we talk about.”

It’s worth pointing out that A-Force formed in the comics in the wake of 2015’s Secret Wars event, so it’s just possible that Marvel is going to replicate that on screen and we can expect A-Force to come together after 2025’s Avengers: Secret Wars releases. In the meantime, She-Hulk: Attorney at Law unfolds Thursdays on Disney Plus.