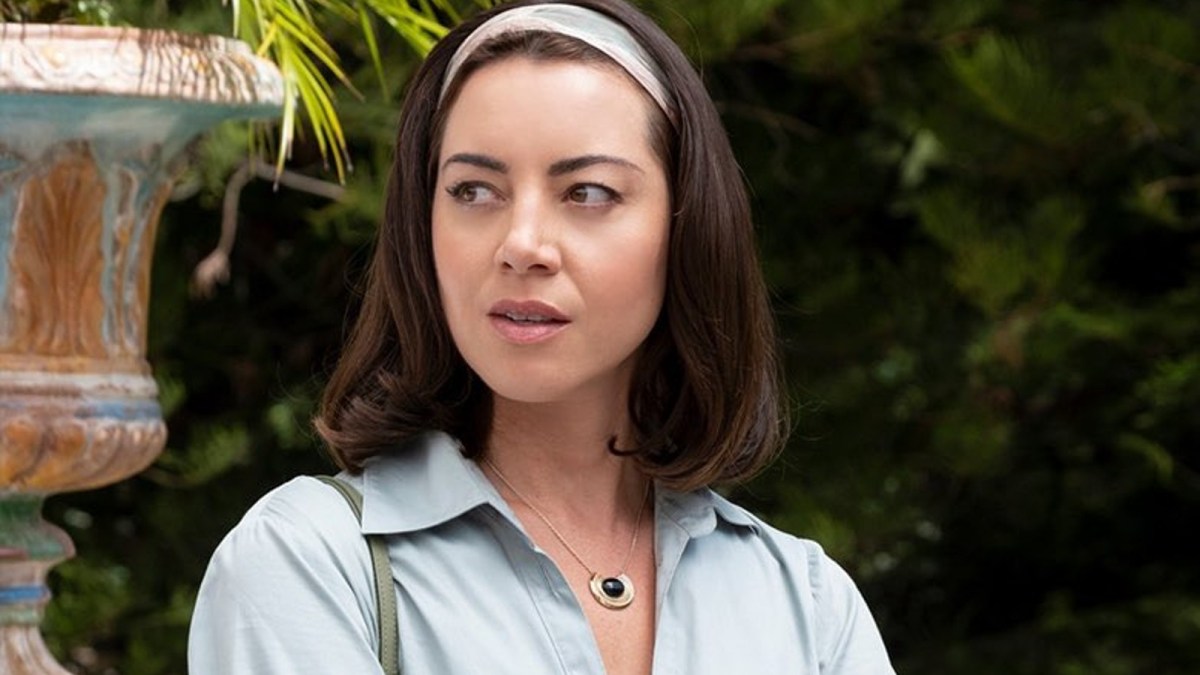 People can’t get enough of Aubrey Plaza and it’s easy to see why. She was one of the new cast in HBO’s dark comedy series The White Lotus and her performance earned her a Golden Globe nomination for Best Supporting Actress, and her off-camera persona is just as interesting as her roles.

When it comes to Plaza, it’s best to expect the unexpected. Her interviews tend to derail into the theater of the absurd, like the actress dressing up as a witch on the Today show and cackling maniacally, and she has an effortless devil-may-care attitude that draws audiences in. Many fans were first introduced to her work in the NBC comedy Parks and Recreation where she played the deadpanned and anti-mainstream April Ludgate, and she’s gone on to land a string of interesting projects that have cemented her as a force of nature.

Little Demon is an adult animated series on FXX about an outcast named Chrissy (Lucy DeVito) who attends Middletown Junior High. She’s judged and bullied, but she has some demonic powers up her sleeves. She soon learns that her father is the devil and she’s the anti-christ and she’s torn between the dark world and being a normal kid. Plaza plays Laura Feinberg, Chrissy’s mother, and their conversations about this twisted familial dynamic is one of the best parts of the show.

In Safety Not Guaranteed, Plaza plays Darius Britt, a magazine intern who’s chosen to get in close to an unusual guy named Kenneth (Mark Duplass), who believes he can travel back in time. This quirky movie has a lot of heart and Plaza and Duplass play off each other well. This farce is all for a story at first, but the closer she gets to him, the more he opens and she sees his humanity. Watching Plaza play this endearing character who becomes protective over an outcast makes this one of her most heartwarming roles.

Black Bear serves as a meditation on art and the artist and it’s simply a revelation. Plaza plays Alison, an actress turned filmmaker who has lost their inspiration and goes to a lake house to rediscover it, but the woods bring out the worst in her. She beguiles and manipulates her newfound acquaintances, and the whole time you’ll be trying to figure out what her true motives are. Plaza is dynamic in this story and by the end, you’ll question what the true cost of art actually is.

Life After Beth is about a guy whose girlfriend dies and then comes back from the dead, and this is just perfect for Plaza. It’s hilarious and a morbid sort of way as Zach (Dane DeHaan) tries to get control of the situation and his girlfriend. Zombified Beth rages out and does her best to adjust to these unfortunate circumstances, but things only get worse despite their best intentions and it becomes untenable. Consequently, the movie also gets funnier.

6. Scott Pilgrim vs. the World

Scott Pilgrim vs. the World is one of the best comedies of the 21st century, and the only reason why it’s not higher on the list is because Plaza wasn’t in it enough. She plays Julie Powers, an unhappy girl who is not a fan of Scott, played by the awkwardly dorky Michael Cera. She delivers her lines with a burning hatred for Scott so perfectly, although she’s friends with his sister Stacey (Anna Kendrick) and she cowers in the presence of the rockstar Envy Adams (Brie Larson). Hearing Julie call Scott a jerk just never gets old.

Emily the Criminal is a thriller about the difficulties of moving on from your past. Plaza plays a woman who’s overwhelmed by student debt and is having a challenging time of finding a job. The movie demonstrates the harsh practices of businesses that keep people from succeeding and she resorts to a life of crime because of the roadblocks. She goes into a life of crime and actually becomes good at it, but as the events get more precarious, you’ll hope she can find a way out of this trap.

Ingrid Goes West is one of the most topical films about the effects of social media you’ll find. It’s about a woman who’s obsessed with ingratiating her life into a popular social media influencer, portrayed immaculately by Elizabeth Olsen. As the titular character, Plaza goes to extreme lengths to befriend the woman, but it never really feels unrealistic. The importance of one’s social media activity is at an all-time high and real people have tried desperately to achieve the clout of a famous influencer. The tragic part about it is that the curated lives of internet personalities are never as glamorous as they make it seem.

The White Lotus season two had the monumental task of following up a superb season of television. The anthology series brought in a new cast, and with Plaza’s help, it managed to maintain the same level of quality. As Harper, Plaza plays a confident (if not judgmental) woman in a strained relationship with her husband Ethan (Will Sharpe) who’s more interested in competing with his business partner than in her. She makes valiant attempts to play nice with the other couple, but Ethan doesn’t pay her much attention until the shadow of infidelity comes into view. Plaza has a poignant performance in this series, and she’s emotionally locked in the whole way through. It came as no surprise when she received the Golden Globe nomination for this role, and she just might receive an Emmy nomination too.

What would Parks and Recreation be without April Ludgate? April started out as an intern who didn’t have any drive or interest in the Pawnee Parks and Recreation department. She seemed to hate almost everything and everyone, but as the seasons went on, April grew in surprising ways. She opened up and became closer to the people around her, and found a love for animals which brought her to her career as Deputy Director of Animal Control. She marries her goofball boyfriend Andy Dwyer (Chris Pratt) who also helps her take things less seriously, and it felt like we got to watch the character grow up right before our eyes.

This choice of number one might come as a shock to some, but anyone who’s ever seen this underrated superhero TV show would understand just what an amazing job Plaza did in this series. Legion ran for three seasons on FX and it explored the metaphysical realms of reality like few shows have done before it. David Haller (Dan Stevens) suffers from paranoid schizophrenia, but it could also be a symptom of his immense mutant abilities (he’s the son of Professor X after all). Plaza plays Lenny, his friend, but because of David’s untrustworthy mind, it’s hard to tell if she is who she says she is, or if she has ulterior motives of her own. Lenny is a trickster with immense powers and she takes David and his mutant friends down a weird road of paranoia and funhouse themes. This performance stretches Plaza in a way that’s different than all the other roles she’s had to play, and there aren’t many others who could have done this as exquisitely as she did.