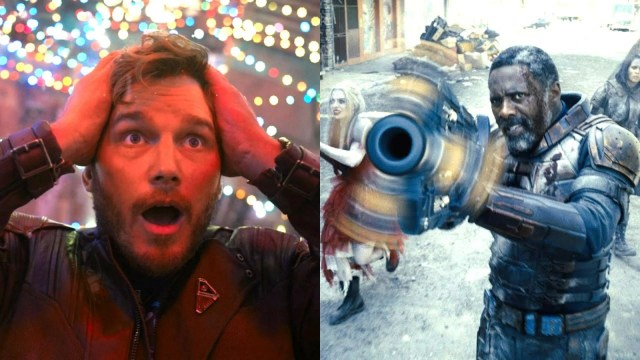 The Guardians of the Galaxy Holiday Special, which just landed on Disney Plus today, is coming to us at a strange period of transition for creator James Gunn. We recently learned he’s set to likely walk away from the Marvel universe for good and set up shop over at the Distinguished Competition — Gunn was recently appointed as co-CEO of DC Studios. Perhaps inevitably, then, the writer/director populated his festive special with various nods to the DC universe.

Everybody and their (talking telepathic space) dog obviously noticed the references to Batman in the Special Presentation, but there’s another major callback to Gunn’s DC work that he sneaked in there that will probably go over many fans’ heads. It comes during the hilarious scene where Drax (Dave Bautista) and Mantis (Pom Klementieff) go clubbing in Hollywood.

When they first arrive at a bar, they ask the bartender where they can find Kevin Bacon. “Why would I know where Kevin Bacon’s located?” says the man, who’s surprisingly short-tempered, despite his Santa hat and festive tanktop.

Although the lack of a long blonde wig may throw you off, this bartender’s unique, Swedish-accented voice might remind you of a certain scene-stealing character from The Suicide Squad. Yes, the bartender is played by Flula Borg, most known for bringing Javelin to life in Gunn’s inaugural DC outing that was released in summer 2021. Javelin was one of the many supervillains who perished during Task Force X’s disastrous first mission in the movie’s high-octane opening sequence.

Borg’s cameo appearance isn’t the only nod to Gunn’s DC colleagues. Once Drax and Mantis acquire a map to the homes of the stars, we see an Indiana Jones-style map of them journeying to Bacon’s house, which includes a few floating heads of the actors they pass along the way. Among them are none other than Harley Quinn herself, Margot Robbie, and the one and only Peacemaker aka John Cena. Another is Arnold Schwarzenegger, the old rival of King Shark actor Sylvester Stallone, (not to mention Chris Pratt’s father-in-law).

The Guardians of the Galaxy Holiday Special is streaming now on Disney Plus.