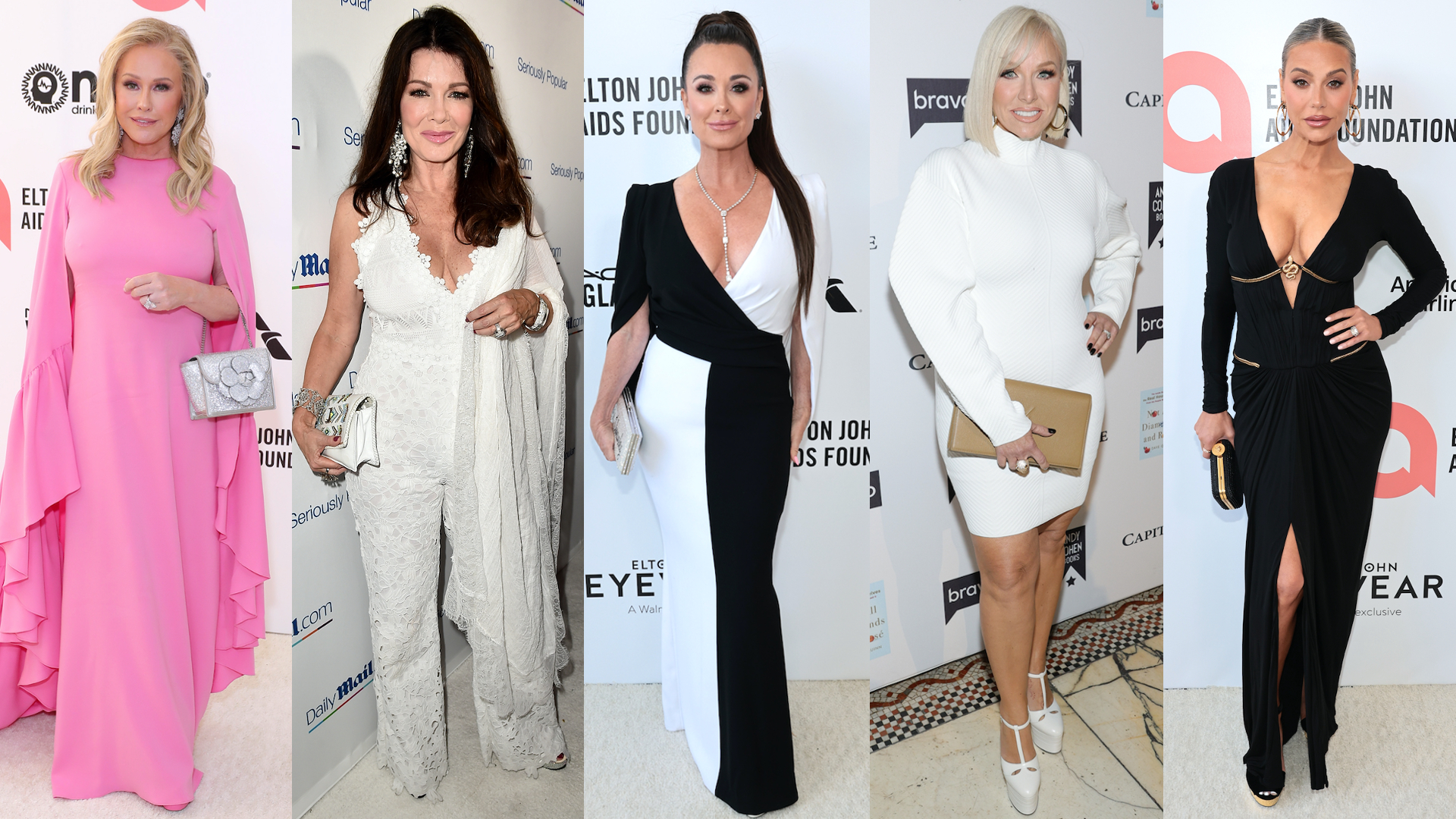 In the game of life, these housewives make the rules.

With the notoriety these housewives have garnered, the thirst to peek inside their illustrious financial lives has become stronger than ever. We know their names and certainly know their drama, but do we know their net worths? Without further ado, here are the richest housewives in the Real Housewives franchise.

Don’t get on this housewife’s bad side, or you might just find yourself plastered all over her Twitter feed. Camille Meyer, formerly known as Camille Grammer, first appeared on season one of The Real Housewives of Beverly Hills, but her presence was felt for years to come. She was famously tied to actor Kelsey Grammer from the hit shows Cheers and Frasier, but when she started as a housewife, it was from her desire to “step out of her husband’s shadow.” The pair ultimately divorced in 2011 and when Camille reappeared in 2019’s season nine after several years away, it was for the wedding of her new husband David C. Meyer. Her marriage to Meyer surely contributed to her net worth, but the most significant portion of this housewife’s money comes from the settlement she received from her first marriage, which was reportedly between $30-$50 million, per Celebrity Net Worth.

After five years away, Heather Dubrow will finally make her return to The Real Housewives of Orange County in 2022’s season 16. The Real Housewives of Orange County was the first of the Housewives franchise to grace our television screens and has since then remained one of the most-watched. Dubrow is an actress who’s appeared in TV shows like Hot in Cleveland and Hawaii Five-0, and has earned her place in the Real Housewives hall of fame. According to Celebrity Net Worth, a majority of Dubrow’s net worth comes from her plastic surgeon husband, Terry Dubrow, whom she’s been married to since 1999.

Even though Adrienne Maloof left The Real Housewives of Beverly Hills on rocky ground, her financial success remains at its peak. This former housewife is currently rocking a $50 million net worth due to her renowned family empire, Maloof Companies, established by her father and multi-billion dollar business tycoon, George J. Maloof Sr. While on the show, Adrienne was married to plastic surgeon Paul Nassif, but the two filed for divorce in 2012. Even after their divorce, Adrienne has managed to maintain her lavish lifestyle thanks to Maloof Companies.

Margaret Josephs of The Real Housewives of New Jersey has had both of her hands dipped in the fashion industry since the early 1990s with her first label, The Macbeth Collection. Since then, she’s built a fashion empire and in 2021 added the title of author to her belt with the release of her book Caviar Dreams, Tuna Fish Budget: How to Survive in Business and Life. The Macbeth Collection and her tenure on The Real Housewives of New Jersey make this housewife the richest of the show and one of the richest of the franchise.

Don’t ask this Southern belle where she got her money from. Sutton Stracke of The Real Housewives of Beverly Hills is notorious for shopping at the big-named brands, but she’s in no hurry to share how much she’s worth or where she got it. In fact, on Watch What Happens Live with Andy Cohen, Sutton shared that she had no idea how much money she had until she got divorced from her ex-husband Thibeault “Christian” Stracke, the global head of investment management firm PIMCO. The pair was married for 17 years and Sutton ended up walking away with a substantial sum that landed her with an impressive net worth. That, combined with her boutique store SUTTON, has earned this housewife a place at the top of the pack.

This polyglot housewife and fashion designer joined The Real Housewives of Beverly Hills in 2016 for the seventh season of the show and hasn’t looked back since. The Sun reports that Dorit makes around $100,000 per season, but we wouldn’t be surprised if that number has increased in recent years, especially after the the drama she brought to season 12 (i.e., getting robbed and held at gunpoint in her Encino home). Kemsley has several fashion lines including Beverly Beach and Nektaria, while her husband, Paul Kemsley (otherwise known as “PK, my love”) is an English businessman, property developer, and former Vice-Chairman of Tottenham Hotspur, the Premier League football club. Their combined assets amass to an impressive net worth for this Beverly Hills Housewife.

Bethenny Frankel is no stranger to money. The Real Housewives of New York City star earned herself a formidable fortune when she sold her company, Skinnygirl Cocktails, of which she was the founder and CEO. The company sold for a rumored $120 million, undoubtedly contributing to Frankel’s substantial fortune. Factoring that into the $1 million she made per season by 2018 on The Real Housewives of New York City, according to Reality Blurb, and it makes sense why she’s worth so much. Frankel also had her own talk show, Bethenny, although it lasted for only one season, and was married to pharmaceutical sales executive and former real estate agent Jason Hoppy. The two were together from 2010 to 2012, but the subsequent stressful divorce lasted a full eight years. Barring the mental and emotional stress Frankel endured, it seems like this Housewife ended up on top.

Leave the crown where it belongs, darling. This housewife made her name a household one during her tenure on The Real Housewives of Beverly Hills. She is one of the few who needs no introduction. During her 10 years on the show, Vanderpump made as many friends as she did enemies, ultimately leaving on uneven footing due to accusations of slipping news to the press. According to Radar Online, Vanderpump, like her co-star Kyle Richards, was making $500,000 per season. Factoring that into her many lucrative restaurant businesses (Pump, TomTom Restaurant & Bar, and SUR Restaurant & Lounge), it’s no wonder she has such a hefty net worth.

When it comes to this housewife, money doesn’t talk, it swears. Carlton Elizabeth may have only been on one season of The Real Housewives of Beverly Hills but she left a wicked mark. This self-proclaimed witch was loud and proud about her sexual habits and loose tongue, earning herself a place just outside the social circle. Her fortune likely comes for her acting days on The Young and the Restless and Pretty When You Cry, but also from her divorce from ex-husband of 18 years, David Gebbia, an extremely wealthy businessman and owner of Stockcross Financial Services.

Kyle Richards kick-started her acting career at just six years old when she starred in big roles like the iconic horror movie Halloween and the charming TV series Little House on the Prairie. The main source of Richards’ income likely comes from her time on The Real Housewives of Beverly Hills, which she has been on since 2010. How much she makes per season has not been concretely confirmed, with some sources saying $500,000 per season and others saying $1 million. Needless to say, after 12 years on the show, she has netted a considerable amount of money and is the only remaining original cast member. She also has her boutique fashion lines: Kyle by Alene Too, which closed its doors in 2018, and Kyle x Shahida, which is still going strong. Of course, we’d be remiss not to factor in the money she sees from her husband Mauricio Umansky’s real estate empire, The Agency.

Make way, Diana Jenkins of The Real Housewives of Beverly Hills is here to steal the spotlight. This housewife is the newest cast member to The Real Housewives of Beverly Hills and has a jaw-dropping net worth of $300 million. She spiced up season 12 with her fearless acceptance of “the villain” role, but her personal and professional background include a large amount of philanthropic and humanitarian work. Born in Bosnia and Herzegovina, Jenkins fled the country in the mid-’90s only to relocate to London where she studied at City, University of London and received a Computer Science and Economics degree. The businesswoman acquired the swimwar line Melissa Odabash and in 2009 launched Neuro Brands, a wellness beverage line. Even with her successful businesses, the bulk of Jenkins’ net worth comes from her divorce from Roger “Big Dog” Jenkins, who Wikipedia reports was once the “highest paid banker in the City of London.” The divorce settlement earned Jenkins a whopping $300 million, according to Celebrity Net Worth, which not only made her one of the richest women in the U.K., but also makes her the richest cast member of the Real Housewives franchise.

The second Kathy Hilton joined season 11 of The Real Housewives of Beverly Hills ⏤ after 10 years of estrangement from her sister, Kyle Richards ⏤ she became the richest Housewife in all the franchise. I mean, she’s a Hilton for goodness’ sake. Her net worth is currently $350 million according to Celebrity Net Worth. However, Kathy is not a cast member, and is instead only a friend of the cast. When her daughter Nicky Hilton Rothschild was asked by People if her mother would join the cast full time, she said, “I do not think she would. I don’t think she has time for it. It’s a full time job.”