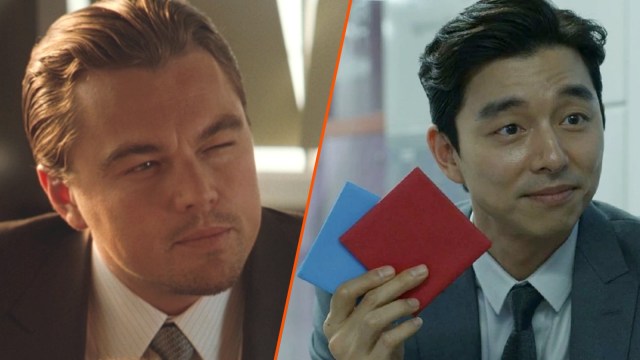 Images via Warner Bros. and Netflix. Remix by Danny Peterson.

After Squid Game creator Hwang Dong-hyuk seemingly alluded to a possible cameo in the show by Leonardo DiCaprio, in some far-off future season, it got our brains percolating about what role he might be a good fit for in the show.

“Leonardo DiCaprio did say he’s a big fan of Squid Game […] so maybe if time or chances allow, we can ask him to join the games. We have already joked about that,” Hwang said during a media conference earlier this month, as We Got This Covered previously reported. The writer-director indicated that if such a collaboration were to happen, it would not occur until season three since the second season is already underway.

In Squid Game, people who are on the brink of financial ruin are recruited into a mysterious contest where they are promised a life-changing sum of money if they win a series of children’s games. But the kicker is if they lose, they die. Things quickly get bloody amongst the contestants themselves as they fight to not only win, but survive.

At first, the notion of an American movie star appearing on the Netflix show famous for bringing South Korean actors into the mainstream for U.S. audiences seems absurd. After all, Squid Game made history by becoming the first non-English-language show to be nominated for and win Emmys in the U.S., such as star Lee Jung-jae winning for Outstanding Lead Actor in a Drama Series and the first episode, “Red Light, Green Light,” winning Hwang an Outstanding Directing for a Drama Series award.

It’s important to note that the Korean-language show has long toyed with people’s perception of fame. For instance, some of the implications of the casting choices and bits of dialogue in Squid Game no doubt take on a meta-commentary meaning when viewed through the lens of its South Korean audience — but lost on its American audience.

As an example, Lee Byung-hun plays the antagonist Front Man in Squid Game, and he’s a huge star in South Korea. At one point, other characters in Squid Game talk about Lee Byung-hun’s movie Inside Men. This would be the equivalent of characters in The Departed, starring DiCaprio, talking about Titanic. However, such insight was lost on American audiences if they weren’t already familiar with the work of Lee Byung-hun, who has also appeared in Hollywood films like Terminator Genysis, the remake of The Magnificent Seven, and the G.I. Joe films.

Hence, DiCaprio’s appearance on Squid Game might actually make perfect sense, depending on the role he is in. Like Lee Byung-hun, DiCaprio is also a major movie star, so putting him in a role in the show that subverts fans’ pre-conceived expectations could have the same effect on American audiences as the unveiling of the Front Man had on South Korean audiences.

Plus, DiCaprio has already had experience literally getting his hands bloody in a villainous role as Calvin Candie in Quentin Tarantino’s Django Unchained, making him primed to portray a violent role once again, as WGTC writer Charlotte Simmons has pointed out.

Without further adieu, let’s count down the top roles we’d like to see DiCaprio play in Squid Game, in ascending order.

For the most part, we still think the contestant characters in Squid Game should probably be reserved for South Korean stars to shine, such as the Emmy-winning Lee Jung-jae and the Emmy-nominated fan favorite HoYeon Jung.

However, there’re 456 contestants who started out at the beginning of Squid Game’s first season, leaving a lot of room for minor cameos if a future game were to start in a similar way.

Many of the characters in Squid Game die early on in the contest and barely have any screen time, which we think would be the perfect sort of cameo for DiCaprio to play in the show. Rather than taking the limelight from other actors who could be introduced to American audiences for the first time, we’d propose DiCaprio appears in the background — almost an Easter egg — as one of the many people who get shot for failing at keeping still during the Red Light, Green Light game, for example.

We’re not proposing replacing Lee Byung-hun as the Front Man in Squid Game. But if that character were to die during the show’s second season and a new Front Man was to take his place for season three, we would be intrigued to see who the new boss behind the mask could be.

Should season three of Squid Game keep the identity of a replacement Front Man in secret for several episodes, such as what they did in season one, seeing DiCaprio’s mug beneath the mask could have the kind of expectation-shattering effect on American audiences as Lee Byung-hun’s initial reveal was to South Korean audiences.

Like Henry Fonda’s reveal as an against-type villain in Once Upon a Time in the West, audiences may just audibly gasp seeing DiCaprio’s face as one of the masterminds of the cruel game in a future season of Squid Game.

#3 – A new Salesman and/or recruiter

Similar to other actors in Squid Game, Gong Yoo is a major star in South Korea, making his minor supporting role as a recruiter known as the Salesman all the more intriguing. Even American audiences may recognize Gong as the star of the South Korean-language film Train to Busan, hailed by many critics as one of the very best zombie movies ever made.

The juxtaposition of Gong’s considerable star power being relegated to such a relatively small role makes it the perfect opportunity for DiCaprio to do the same thing in a similar fashion for a future season.

Gong’s Salesman, as he is known, wasn’t even given a name in Squid Game, and only had a couple of scenes in which he entices Lee Jung-jae’s character to become interested in the contest by playing a slap-happy folded paper game of Ddakj that ultimately won him money.

Presumably, there are even more recruiters that work for the mysterious company that runs the Squid Game in the world of the show who are similar to the subway-haunting Salesman. Perhaps one of those recruiters could be played by DiCaprio in a quick scene, similar to how DiCaprio’s character Dom Cobb in Inception recruited Elliot Page’s character in that same film.

It would be cool to see DiCaprio make such a cameo and Gong return for his role as the Salesman within the same season. The two could even share a scene together where they grab a donut on a coffee break as colleagues or something.

One of the best potential cameos DiCaprio could make on Squid Game could be the kind where audiences aren’t even aware it is taking place. In the show, droves of guards wear pink jumpsuits and helmets obscuring their faces. The soldiers, workers, and managers can be as disposable as the contestants themselves at times, not unlike the cannon fodder known as stormtroopers in Star Wars.

Speaking of Star Wars, the inspiration for this suggestion comes from the fact that Daniel Craig, a megastar who portrayed James Bond in films like No Time to Die, actually made a cameo as a stormtrooper in Star Wars: The Force Awakens, as Entertainment Weekly reported.

A DiCaprio cameo as an anonymous guard in a blink-and-you-miss-it scene could easily make for a fun Easter egg for fans to try to dissect.

Of all the possible cameos DiCaprio could hypothetically make in a forthcoming season of Squid Game — assuming Hwang wasn’t pulling our collective leg with the casting tease — the Gangs of New York star playing a VIP in the show would make the most sense, narratively and thematically.

In case you need a reminder, the VIPs in Squid Game were the wealthy elites who came to lounge in the secretive compound’s backrooms in order to observe the contestants like they were racehorses. The VIPs would view the games on large monitors from behind their masquerade-like masks in the likenesses of animals, making bets from the comfort of leather couches on who they think would ultimately win the contest.

What’s more, many of the VIPs in the first season of Squid Game were depicted as wealthy Americans who spoke English so the casting of DiCaprio would not be out of place in terms of being an English speaker in a largely South Korean-language show. That would make the DiCaprio cameo make sense from a narrative standpoint.

Since DiCaprio is himself arguably a wealthy elite whose profile is perhaps not unlike the VIPs in the show, a cameo by him in such a role would also make complete thematic sense. It could be a fun dose of the kind of meta-commentary that Squid Game has now become famous for if DiCaprio played a lightly fictionalized version of himself, similar to how Nicolas Cage played himself in the film The Unbearable Weight of Massive Talent. Because after all, DiCaprio could very well be a famous American movie star who likes to gamble on life-or-death contests on secretive islands, for all we know.

A Squid Game season two is in the works, but it won’t be coming out until 2024, according to Deadline.