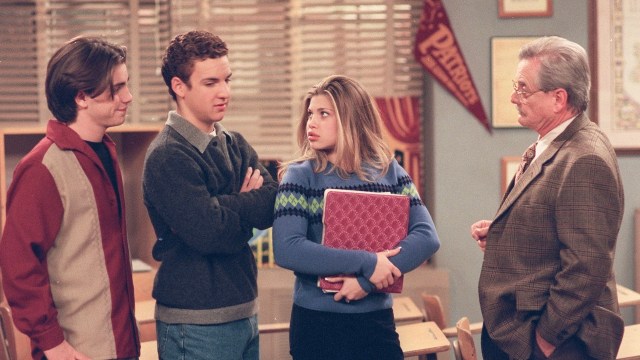 A staple in television history, Boy Meets World is the coming-of-age comedy about the life of Cory Matthews as transitions from childhood to adulthood. From 1993 until its seventh season in 2000, viewers watched as Cory and his friends and family navigated life with one another.

The talented cast have all gone on to achieve significant success since the series’ conclusion, and many appeared in the Disney Channel spin-off comedy Girl Meets World, which aired from 2014 until 2017. Many of the former cast members still seem pretty tight knit, save for some recently revealed drama that just came to light 20 years later, and some secrets about friendships outside the show.

Here’s what the cast of Boy Meets World are currently up to now.

Bringing the iconic role of Cory Matthews to life, Bennett Joseph Savage is an American actor who began his acting career in 1989. Kicking off his debut at the age of nine, he appeared in the film Little Monsters, before taking on various roles in film and television projects, including The Wonder Years, Clifford, Hurricane Sam, and Dear John. After the conclusion of Boy Meets World in 2000, he guest starred in a couple of popular series before joining the spinoff series Girl Meets World in 2014, reprising his character Cory Matthews. His most recent role is portraying the real life kidnapper Nathaniel Kibby in the Lifetime movie Girl In The Shed: The Kidnapping of Abby Hernandez. Savage is also a politician, and ran as a candidate in the 2022 West Hollywood City Council elections.

Best known for her role as Amy Matthews in Boy Meets World, Betsy Randle is an American actress born in 1950. In 1989, she guest-starred in Baywatch, and also starred as Nancy on Family Ties. Other projects in her filmography include: Valerie, Home Improvement, The Nightmare Room, Charmed, and Dirty 30. In 2020, she landed her first lead film role as Joanne in the psychological thriller, Painter. The 72-year-old resides with her family in Ojai, California.

One of the most successful cast members since the series’ conclusion, William Allen Friedle has become a very notable voice actor, lending his voice acting chops to many famous animated projects and video games. Friedle voiced Ron Stoppable from 2002 until 2007 in the Disney Channel staple series Kim Possible, and Terry McGinnis (Batman) in Batman Beyond. In addition, he has lent his voice to Static Shock, The Zeta Project, and Justice League. The actor and comedian was also a co-host on the Nickelodeon series, Don’t Just Sit There, which ran for three years. Earlier this year, he began co-hosting a YouTube podcast called I Hear Voices, and is a co-host of the Boy Meets World rewatch podcast titled Pod Meets World.

William Russ is an actor and director. During the 1980s, he played supporting roles in films such as The Border, The Right Stuff, Crisis at Central High, and Second Serve. In 1991, he starred as Roy Dean Bream in the film Pastime which earned him a nomination for Best Male Lead at the 1992 Independent Film Awards. In 2011, he was the lead in the comedy web series Home at Last. He recently appeared in the TNT drama Animal Kingdom in a guest capacity, and currently stars alongside Jon Hamm and Kate Mara in the Audible podcast series The Big Lie.

Lily Nicksay Gibson is a film and theatre actress who is best known for her role as Morgan Matthews, Cory’s adorable younger sister in Boy Meets World. She began her theatre career in 2002 playing Hedvig in The Wild Duck and has accrued several credits in other productions, such as See Rock City for which she won the Best Lead Actress in a Play Award at the 2017 Ovation Awards. She recently welcomed her first child with her Grammy Award-winning husband Dave Gibson.

Before his role as the lovable teacher and guide George Feeny, William Daniels was already considered a Hollywood veteran, with a long television career kicking off in 1952. William’s film debut came in 1963 with the anti-war drama Ladybug Ladybug. In 1982, he played the role of Dr. Mark Craig in the acclaimed medical series St. Elsewhere which earned him two Emmy Awards for Outstanding Lead Actor in a Drama Series. Like his fellow co-stars, he appeared in the spinoff series Girl Meets World. At 95, the veteran actor is taking a backseat from acting to spend time with his wife of 71 years, Bonnie Bartlett.

Rider King Strong is an actor, producer, screenwriter, and director. His acting career began at age nine when he played Gavroche in a production of Les Misérables. He made his television debut in 1992 when he starred as Adam McGuire in the film Julie. After the conclusion of Boy Meets World, Rider took a break and decided to attend Columbia University. In 2002, he took time off from school to star in the horror film Cabin Fever and ended up graduating two years later. In 2008, he and his brother Shiloh wrote and directed the short film Irish Twins. Strong has also voiced some unforgettable characters such as Brick Flagg in Kim Possible, Tom Lucitor in Star vs. the Forces of Evil, and Jim Bailey in Invasion America. He is currently a co-host on the podcast Pod Meets World with Will Friedle.

Danielle Fishel is an actress, director, and model who rose to prominence as Topanga Lawrence, the love interest of Cory Matthews. She began her acting career at age 10, and appeared in several commercials and television shows. Fishel won the Best Performance by a Young Actress in a Comedy TV Series at the 1998 YoungStar Awards. She appeared in, and directed some episodes of the spinoff comedy Girl Meets World. Alongside her former co-stars Rider Strong and Will Friedle, Fisher is currently a co-host on the podcast Pod Meets World.