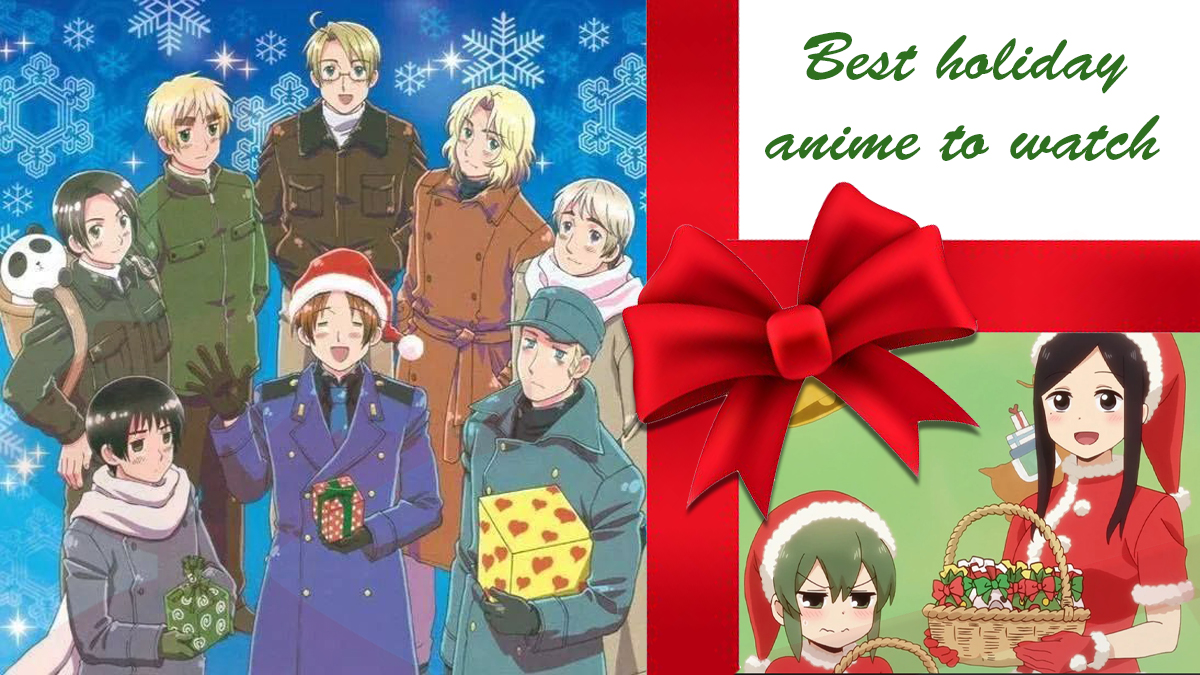 It’s the holiday season. The weather outside is cool, but hopefully not frightful. Decorations adorn homes and festive music fills the air. As families gather around the fireplace, roast marshmallows and drink hot chocolate, someone is probably turning on a Christmas movie for everyone to watch.

Instead of watching A Christmas Carol for the 50th time, seeing the nasty old Grinch steal presents from the boys and girls in Whoville, or even witnessing the magic of holiday season through George Bailey’s eyes in It’s a Wonderful Life, try to shake things up this year. Instead of the traditional favorites, watch some special holiday-inspired anime episodes or movies.

There are so many different interpretations of what makes a great holiday movie: funny, adventurous, hopeful, light-hearted, romantic, and so many other adjectives. Some of the anime listed may follow the traditional holiday classics to a tee, while others may leave viewers feeling a bit wistful.

Thie heartwarming Tokyo Godfathers by the late Japanese anime and manga artist Satoshi Kon is about three homeless people, who have all lost their faith in humanity. They find a baby in the trash and set out on an adventure across Tokyo to find the baby girl’s parents. A series of unexplained miracles take place throughout the film and will leave viewers feeling like life will be better.

Tokyo Godfathers can be watched on Amazon Prime Video.

The cute romantic anime Toradora!, about two high school students who fall in love after trying to set each other up with their friends, has three episodes dedicated to the holiday season. Episodes 17-19 are built around the most magical time of year as the students of the school prepare for a Christmas Eve Festival and begin to realize their feelings for one another.

Toradora! can be watched on Netflix.

The futuristic anime Sword Art Online focuses on a group of gamers who all log in to a massive multiplayer role-playing game, but are unable to leave the game. If they die in the game, they die in real life. If they leave the game early, they die. In Episode 3’s “The Red-Nosed Reindeer,” the lone wolf Kirito agrees to team up with some other gamers for a special Christmas-themed section of the game, but blames himself when people die. This episode is heartbreaking and will definitely not put you in the Christmas spirit.

Sword Art Online can be watched on Netflix.

There are several Christmas-themed episodes in the Pokémon anime, such as “Holiday Hi-Jynx,” “Christmas Night,” “Stantler’s Little Helpers”, and “Delibird’s Dilemma”. Every episode is focused on helping to save Christmas in one way or another.

Ash and the gang meet the big man in red in the episode “Holiday Hi-Jynx”. In this cute episode, the Pokémon Jynx is shown to be Santa’s helper, kind of like an elf.

“Christmas Night” is a short from Pikachu’s Winter Vacation, about Pikachu and his Pokémon friends pretty much throwing a Christmas party, wrecking the house and then rushing to clean up their mess before Ash, Misty and Brock return.

In another short from Pikachu’s Winter Vacation, the Pokémon spot a red flash of light across the sky and go investigate only to find Santa Claus trying to help one of his Stantler, who isn’t feeling well. In order to save Christmas so Stantler can pull Santa’s sleigh, Pikachu and friends help look for a special berry to heal the sick Pokémon.

In “Delibird’s Dilemma”, while Pikachu and his Pokémon friends play in the snow, they accidentally knock a Delibird out of the sky, spilling out all the presents that were in his sack for Santa. To help save Christmas, the Pokémon all help search for the missing presents, so Santa can deliver them on Christmas.

Pokémon can be watched on Netflix.

The romantic anime Kimi ni Todoke is about Sawako, an outcast girl name made fun of because of her resemblance to the creepy girl from The Ring, who falls for the most popular boy at school Shōta. In the episode simply called “A Christmas,” Shōta throws a Christmas party, and Sawako is torn between spending the holiday with her family or spending it with her crush.

Kimi ni Todoke can be watched on Crunchyroll.

Umaru is already one of the cutest and tiniest girls in anime, so throwing in a little Christmas is sure to be magical. Episode eight of Himouto! Umaru-chan is centered around Christmas and New Year’s, and really highlights the close bond between Umaru and her brother Taihei.

Himouto! Umaru-chan can be watched on Amazon Prime Video.

Itsudatte My Santa is about a boy named Santa who hates everything about his name, including Christmas. He meets a mysterious girl named Mae who loves the holiday and makes it her mission in life to show Santa the joy of the Christmas season. This two-part film is about as heart-warming as they come.

Itsudatte My Santa can be watched on Anime Planet.

The anime Cardcaptor Sakura somehow blends romanticism with magic to up the whimsical factor during its very own Christmas episode “Sakura’s Wonderful Christmas”. After Sakura gets the courage to ask Yukito on a date to the amusement park, things go awry. The episode is funny and cute, with an ending that leaves one feeling hopeful.

Cardcaptor Sakura can be watched on Crunchyroll.

My Senpai is Annoying

The funny romantic anime My Senpai is Annoying, about a small woman who falls for a large man she works with, has a wonderful Christmas episode called “And Then, It’s Christmas”. The episode centers around the office Christmas party and gifts being exchanged between Igarashi and Takeda.

My Senpai is Annoying can be watched on Funimation.

Hetalia: Axis Powers is a funny, educational anime that teaches historical events through comedy. The hilarious Christmas episode, “Christmas Around the World” is about how differently Christmas is celebrated throughout the world.

Hetalia: Axis Powers can be watched on Funimation.