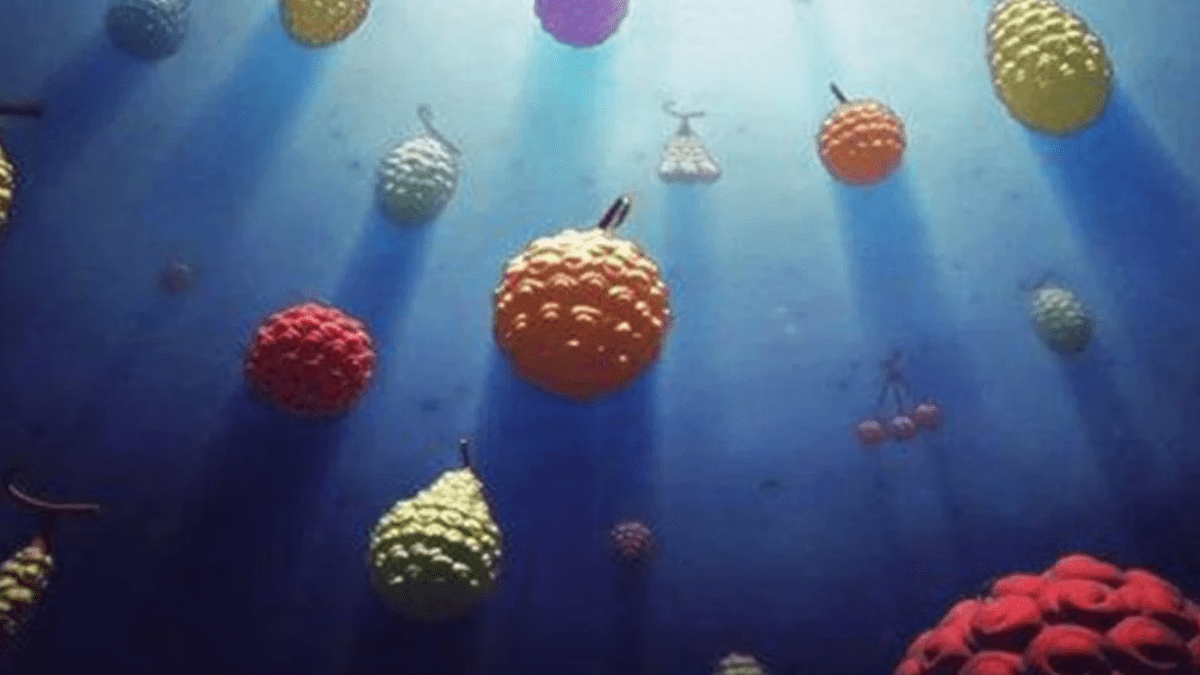 Devil Fruits are some of the most iconic items in the anime and manga mediums. The core power source in the One Piece universe, these mysterious fruits give anyone who consumes one a unique ability, with each Devil Fruit bestowing a different power on its consumer.

At the time of writing, there are over 100 Devil Fruits in the One Piece universe. Some are owned by lowly minions, while others have allowed some legendary pirates to dominate the high seas, cutting down anyone who dares oppose them. Devil Fruits are so memorable because of the sheer variety of powers they bestow. While some give regular abilities like super-strength or increased endurance, others give the user unique abilities, ones not seen in any other show.

But which is the strongest? Here are the 11 strongest Devil Fruits in One Piece.

Famously used by the series’ protagonist Monkey D. Luffy, this Zoan Devil Fruit allows the user to stretch their limbs as if they were made of rubber, thus affording them the ability to propel themselves forward, absorb heavy impacts, or hit things from a distance.

However, this fruit truly comes into its own when the user learns how to awaken the Gum-Gum Fruit. Once they have done this, the user becomes a “Warrior of Liberation” and can hit harder and move faster. Plus, their body becomes stretchier and can adapt and change in even more powerful ways.

While the Gum-Gum Fruit may not be the most powerful Devil Fruit on paper, Luffy’s creativity and drive to come out on top allow him to use this Devil Fruit’s ability in ways others wouldn’t think of, meaning a Gum-Gum Fruit in Luffy’s hands becomes a highly potent weapon.

The String-String Fruit is a Paramecia-type Devil Fruit that is currently used by Donquixote Doflamingo. This fruit gives those who eat it the ability to summon thin, razor-sharp strings from their body. These strings can slice through objects and flesh easily, making them fantastic weapons, especially as they’re hard to see with the naked eye. These strings can also be attached to clouds, allowing Doflamingo to use them as improvised transport.

The best part of the String-String Fruit is that if the strings connect to a foe’s spine, they can control the person like a marionette puppet, forcing their body to obey the user’s will.

However, this is not a perfect power. The strings vanish if the person creating them is knocked out. Also, several other Devil Fruits allow their user to spot, block, or destroy the puppet strings.

The Fish-Fish Fruit, Model: Azure Dragon fruit is a Mythical Zoan-type Devil Fruit consumed by Kaidou. This fruit makes it possible to transform into a giant Eastern Dragon called an Azure Dragon. It also lets Kaidou turn into a human-dragon hybrid.

The dragon form is gigantic, easily dwarfing many small-to-medium settlements. Physical attributes are also massively increased by the fruit, allowing them to easily lay waste to towns with the slightest touch, and even the movement of the giant dragon can level buildings due to the resulting shockwave.

The fruit also grants its user several supernatural abilities, including flame clouds that cause damage and allow a person to fly and lift heavy objects, including entire islands. The user is also able to control several elemental forces, including fire, lightning, and wind.

However, while it is a powerful form, they must be careful as being a dragon makes them a much bigger target and, due to their immense size, they may accidentally harm their allies by mistake.

The Glint-Glint Fruit is used by Borsalino, and it is a Logia-type Devil Fruit. This fruit grants him the power to control, create and turn into light, giving him access to many unique skills.

Using the power of the Glint-Glint Fruit, Borsalino can fire laser beams from anywhere on his body, giving him a series of rapid-fire long-distance attacks. By turning himself into light, Borsalino can move around at the speed of light. He can use this to effortlessly avoid incoming attacks and deliver devastating physical strikes.

However, while this power is strong, it isn’t helpful when a foe sneaks up on Borsalino or gets in close, putting Borsalino at a disadvantage when going toe-to-toe with an enemy.

The Paw-Paw Fruit is used by Bartholomew Kuma, and it is a Paramecia-type Devil Fruit. This fruit puts cat-like paw pads on their hands. But these are not just for show. In fact, they can repel anything they touch. These items are sent flying at immense speed, allowing the user to throw foes and deflect attacks and incoming projectiles.

This fruit also allows someone to unleash powerful physical attacks that can smash rocks. The Paw-Paw possessor can also propel themselves using this fruit’s ability, and this movement is so fast that many believe it to be teleporting.

However, the downside of this fruit is that the person must have their hands free to use it. They will not be able to use their paws if they’re holding an object. However, in a world where projectile attacks are commonplace, having the means to defend yourself is always a good thing.

Sugar’s Hobby-Hobby Fruit is a Paramecia-class Devil Fruit that only gets more disturbing the longer you think about it. Whoever eats this fruit gets eternal youth, which seems fantastic on its own, but its secondary ability is even better.

Anyone who eats the Hobby-Hobby Fruit gets the ability to turn anyone they touch into a toy. When someone becomes a toy, everyone else in the world forgets about their existence. Once someone is a toy, Sugar can make a contract with them. This contract forces the toy to do whatever she wishes without question, even having them fight for her.

However, if Sugar falls unconscious, then all of this is undone. Also, if she fails to immediately make a contract with a toy, it keeps its free will and, some toys have been able to use contractual loopholes to get around Sugar’s control. This makes the Hobby-Hobby fruit extremely useful but prone to backfiring.

Bartolomeo’s Barrier-Barrier Fruit is a Paramecia type. It gives its owner the ability to create a barrier either in front of or behind them, and they are extremely strong, able to withstand the attacks of many other Devil Fruit users. These barriers can also be used as weapons, as he can move the barrier towards their foes at great speed, smashing them out of the way.

However, they can only sustain one barrier at a time, and it has a maximum surface area, leaving them vulnerable to flanking. The walls also allows sound and certain waves to pass through, meaning that some attacks can also pass through unhindered. While Bartolomeo has yet to find his breaking point, it doesn’t mean there isn’t someone who can’t shatter them.

Used by Whitebeard, this Paramecia-type Devil Fruit is said to be the mightiest Paramecia type and that it has the power to end the world, which should explain why it is so high up the list.

This fruit lets the user create massive vibrations and shockwaves that can travel through any medium. These shockwaves can be used to trigger earthquakes and tsunamis, which can utterly devastate whole islands and sink any ship unfortunate enough to come into contact with them.

However, the big downside of the Quake-Quake fruit is that the effects of these shockwaves can’t be controlled or aimed, meaning that Whitebeard could destroy his own ships or kill his own men if he uses it at the wrong time.

Used by Enel, this Logia-type Devil Fruit gives someone the ability to generate, control and even turn into electricity. This means they can fire out 200 million volt bolts of electricity that can fry anything they touch. By turning into electricity, they can dodge attacks and quickly move from place to place by travelling through conductive materials, making them very hard to restrain.

In and out of the One Piece universe, this fruit is considered dangerous. At one point, Nico Robin described the power as invincible. Creator Eiichiro Oda has said that Enel would have a massive 500,000,000 berries bounty because of his powers.

Another Paramecia type, Soul-Soul Fruit was made famous by Big Mom. When you see it in action, you soon realize why she is so feared. The Soul-Soul Fruit gives the power of soul manipulation, allowing the holder to pull the soul out of anyone who feels fear, draining the victim’s life in the process.

The user can then take these stolen souls and embed them into objects, turning them into sentient beings called homies. Homies can be anything, from plants to food to air, and the stronger the soul used, the stronger the resulting homie. The only downside of this power is that homies can sometimes rebel against their creator. As they’re physical, they can be harmed and killed in battle. Also, if they isn’t careful, they can accidentally put a soul into an object they didn’t intend to.

This Paramecia-type Devil Fruit allows its owner to conjure a white space called a ROOM. When the ROOM is created, the fruit’s user can manipulate anything caught within it in a surgical manner. This includes moving and teleporting things around and even bloodlessly separating people limb from limb and rejoining them in any combination, letting them combine people with objects, or make weird gestalt entities.

What’s more impressive is that this separation doesn’t harm the victim, and they can still feel their separated part, no matter where it is in the area. On top of this, the user can shock people or even fire blades that destroy internal organs without damaging the skin, provided the target is inside the ROOM.

However, the most impressive ability of the Op-Op Fruit is that it lets them swap people’s hearts, effectively moving their soul from body to body. If the Op-Op users are willing to sacrifice their own lives, they may give another being eternal youth via a technique called Perpetual Youth Surgery.

The only downside of this fruit is that it quickly depletes stamina, meaning it can only be used for a limited time. Also, according to Rosinante, a user must have lots of in-depth medical knowledge to use the fruit effectively.