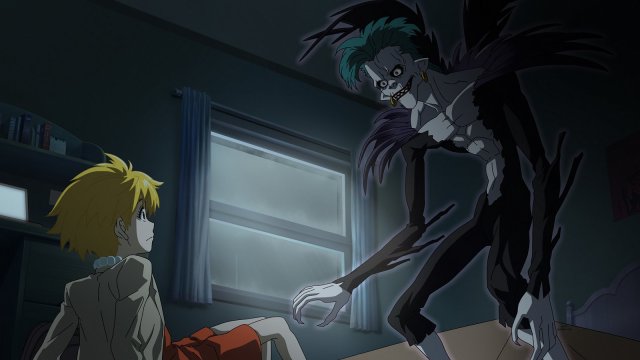 A new clip from The Simpsons‘ forthcoming Treehouse of Horror episode has been shared and should feel very familiar to anime fans or anyone with taste.

In the highly anticipated episode, the show is set to parody Death Note — one of the most beloved anime series ever. After seeing images shared online yesterday, a new clip introduces fans to the episode’s Shinigami.

The clip is its own version of the scenario with Light Yagami embracing the power of the Death Note and meeting Ryuk, the Shinigami in the original series. However, in this Simpsons spin, the ‘Death Tome’ has its own unique Shinigami called Steve Johnson.

If you think that is an odd name for the God of Death then you’re not alone, as the characters fear inspiring aura quickly disappears when Lisa finds out his name — despite attempts at justification.

Since it was first revealed earlier this week, fans have been losing their minds over this new Simpsons episode and it won’t be long before they finally get the chance to see it for themselves.

Treehouse of Horror 2022 is set to air on FOX this Sunday, Oct. 30. Alongside this Death Note-inspired segment fans can also expect two other tales for the spooky season. Sadly if you miss the episode live your options to catch it will be limited as it’s not expected to land on Disney Plus until the season has aired in its entirety.

If you missed yesterday’s glimpse at the episode you can check that out in all its glory here.