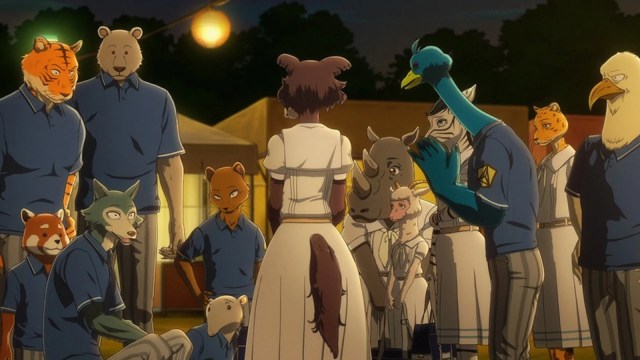 When a fellow student is attacked and devoured in the night, Cherryton Academy, the home of anthropomorphic animals, is in shambles over the mysterious and vicious killing. An extreme distrust manifests itself and causes a cultural divide between the carnivores and herbivores, but a reclusive wolf falls hard for a dwarf rabbit and their unconventional relationship is tested as Cherryton’s killer remains at large.

Of course, we’re talking about Beastars, the manga series turned successful anime from writer and illustrator Paru Itagaki. The manga ran from 2016 to 2020 and the animated adaptation began airing in 2019, having produced two seasons thus far with a third on the way. In this universe, eating meat is illegal as carnivores and herbivores coexist; the titular “Beastar” is the name given to an individual of exceptional talent and notoriety. In the anime, Louis, a red deer, is the hopeful prospect for the next Beastar. Paru Itagaki conceived Legoshi (whose name derives from actor Bela Lugosi) in high school, but while Beastars‘ lead character has become the series’ mascot, there are countless other main and supporting characters who collectively make Beastars so unforgettable.

Some Beastars aficionados might be surprised to see Ibuki on this list. While he didn’t serve much of an individual purpose, Ibuki greatly impacts Louis character, especially as Louis underwent his transformative character arc from promising student to ruthless mob boss. There’s a “gentle giant” aspect to Ibuki’s personality that makes him likeable; he’s extremely self-aware and modest when it comes to his favorable status as a carnivorous lion in an eat-or-be-eaten society. He cares deeply about Louis, but his loyalties lie in the Shishigumi—his own brethren of big cats—and he would dispose of Louis in a heartbeat rather than betray his own kind. However, when the time comes for Louis to “fly the nest” so to speak, Ibuki is morally torn between sparing Louis’ life or doing what needs to be done, especially because Louis knew too much about the Shishigumi. There’s emphasis on the “supporting” adjective to Ibuki’s character, but he’s a memorable one nonetheless.

Some love him, some hate him, but Pina wasn’t designed to be likeable. Pina is considered handsome and charismatic, but arrogant and insufferable at times. Although Pina provokes the carnivores at Cherryton Academy, he isn’t inherently unpleasant—just flawed. There isn’t a whole lot to say about Pina other than that his character is purely comical and fun; he’s the stereotypical playboy, and he doesn’t apologize for it, so neither should we. Even if he’s the most irritating character in the whole anime by a long shot, there’s something irresistibly charming about him, and our hearts still skipped a beat when we thought Riz had eaten him. Let’s admit it.

Jack would be much, much higher if it weren’t for other recurring characters stealing the limelight. Legoshi’s childhood friend, Jack, prides himself on pacifism and would never harm a fly, which is precisely what makes him so relatable and endearing. In the midst of chaos at Cherryton Academy with herbivores accusing carnivores of unspeakable acts, Jack remains an ever-positive beacon of reassurance and optimism. Jack is joyful, fun-loving and amiable, not to mention the smartest student in his year, so it isn’t hard to find him admirable. Always a faithful friend to Legoshi, Jack isn’t selfish nor vicious, but he’s every bit as personable as real-life dogs and twice as intuitive. He and Legoshi share an unbreakable bond, which is a real delight to watch unfold on-screen.

Again, another surprising entry. Although we hardly see Rokume besides a fateful encounter with Legoshi, her presence is felt for some time thereafter. Introduced as a minor character in Episode 14, Rokume is the one and only security guard at Cherryton Academy, whose limbless appearance is often regarded as unsightly, therefore she remains hidden in the shadows and rarely—if ever — socializes. She expresses envy towards quadrupeds, especially Legoshi, whom Rokume considers to be blessed with a conventionally ‘normal’ body. Mistaken for a monster known as the “Six-Eyed Ghost” that travels through the air-vents at Cherryton, Rokume adds a unique element of mystery to Beastars that leaves audiences without much closure as to where Rokume came from.

Although he may appear soft and cuddly, Riz is anything but. As the primary antagonist for Beastars‘ second season (the Murder Incident Solution arc) and the confirmed murderer of Tem, Riz harbors a mixture of emotions towards herbivores and the circle of life. He expresses remorse for killing Tem, but he also preaches that carnivores were born to devour herbivores and that nothing can disrupt the natural order of predators and prey. There’s controversy surrounding Riz’s actions, especially in regards to Tem; flashbacks claim that Riz and Tem were close friends, but Riz wigged-out after experienced bad side effects from a government mandated medication for bears to limit their strength. Although he gave into his instincts, Riz considers the whole ordeal an accident, while others, such as Legoshi, beg to differ. Some viewers might hate Riz, while others love him, so there’s a fairly even split down the middle. Regardless of whichever side your allegiance lies, Riz is a thoroughly complicated and endlessly fascinating character.

Quite the opposite of Riz, Gohin looks ferocious and hardened from battle, but he’s actually a sweetheart. Although reluctant at first, Gohin takes Legoshi under his wing to train him in the ways of herbivores, including resisting the temptation to chow down on another animal. Pandas are natural-born carnivores, but often choose not to eat meat, which means Gohin’s diet consists of bamboo leaves and various plants. While the training is rigorous and painful, Gohin guides Legoshi through the process and eventually develops somewhat of a father-son bond with him. Gohin always arrives in the nick of time to save the day, despite making it a personal rule to not form attachments to others. He’s a lonely recluse, but the characterization stays true to the nature of pandas, who prefer the freedom of being alone. There’s a balance in Gohin’s character that rests on the border of strict and jocular, so he has plenty to offer in terms of range, and there’s something for everyone.

She swept through Beastars like a cool summer breeze, and we’re so glad she did. Juno was a real breath of fresh air in the midst of the rising tensions between herbivores and carnivores; she would always preach to never “show her fangs” to anyone for any reason. Juno competed against Louis to become the next Beastar. Although the winner was never announced, she was very much in the running, especially after Louis left Cherryton to become the boss of the Shishigumi. Unlike some other carnivores, Juno treats every animal equally, however, she can be over-ambitious at times, a trait which brings out her manipulative streak. She and Haru have some humorous—if not a tad off-hand—scenes together, which makes for entertaining interactions that elevate both of them as individuals. There’s a lot to unpack with Juno’s character, but she has a lot to offer, so the possibilities are endless as we explore her character further in the future.

We could sit and babble on and on about Haru and how significant a character she is, but Paru Itagaki summarizes the defining traits that make Haru so relatable yet unpredictable. Paru said, “Her true defining trait is that she’s always willing to be true to herself. Many of the characters are portrayed living life with some kind of mask, but only Haru chooses to live life nonchalantly for her own desires. Haru’s ‘childish sincerity’ is something she shares with Legoshi, which makes it a very important trait indeed.” Some viewers would believe that Haru was created merely to propel Legoshi’s storyline, but she stands tall as a respectable character in her own right. While most portrayals of sexually promiscuous females within anime are tasteless and derogatory, Haru embraces that side of herself and lives unashamedly as an attractive and capable female in a society that tries its hardest to snuff out her spark. If ever there were a role model for women—excluding the questionable choices that Haru makes at times—that would encourage them to their most authentic lives, she would be it.

What? Legoshi isn’t number one? Say it ain’t so! Before the confusion sets in, there are some good arguments as to why Legoshi isn’t higher. We’ll get to those later, but for now, let’s focus on why Legoshi deserves the second-highest honor. For starters, Legoshi is the heart and soul of Beastars; without him, there wouldn’t be a solid concept to form the groundwork for the anime. After all, the underlying theme of Beastars surrounds Legoshi and Haru’s forbidden romance. Without Legoshi, there wouldn’t be much plot. Legoshi, like many of us, can be misunderstood due to his outward appearance as an intimidating carnivore, but he’s actually mild-mannered and behaves like a modern-day gentleman. Aware of the prejudice surrounding the society he lives in, Legoshi takes it upon himself to uncover the mystery of Tem’s murder, which he does so successfully. There’s a piece of Legoshi’s personality that all of us can relate to in one way or another; he’s a social outcast, insanely awkward, a hopeless romantic and a good guy mixed up in a bad world.

Hear us out. Louis, although not as conventionally crucial to the story as Legoshi, easily takes the cake for the most elaborate character conception in all of Beastars. Louis almost has multiple personalities; the kind and caring role model, the merciless crime lord, the scared child and the mature young adult. There are so many variables to Louis personality and he undergoes such a huge metamorphosis that it’s hard not to concentrate on his overall development above any other character. At first, Louis has a deep-rooted hatred for carnivores, then he becomes one (sort of). Finally, after understanding Legoshi and Riz on an emotional level, he denounces his loathing towards predators and comes full-circle to understand what it means to be an herbivore living in a carnivore’s world. He shows growth well beyond his years and some of the most interesting scenes place Louis at their core, so that’s enough reasons to rank him above all others.

Beastars returns with a third and final season in 2024.