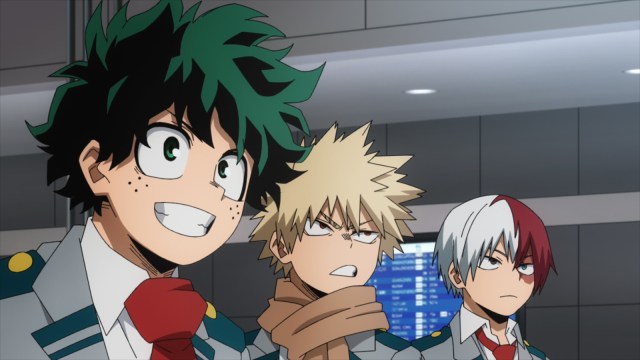 What makes a piece of media successful? Some would argue storytelling is the most significant aspect to achieve greatness, while others could point out the importance of visuals and sound design. For some people, nothing gets them more attached to the content they consume than well-rounded and compelling characters. As we well know, the vast world of anime is where we often find the most unique characters.

As one of the most popular anime and manga series of our time, My Hero Academia has a solid ensemble of interesting and well-loved characters. From earnest heroes to ruthless villains, this series has it all, and it portrays an array of truly powerful characters, some of them even overpowered, one could argue. Being powerful doesn’t necessarily equate to being the best, especially when it comes to earning the audience’s favor. Despite their appearance or quirk, the most likable characters are often the ones with the most gripping personalities and backstories, whose development is evidently compelling to watch.

While every fan of the series has their own list of beloved characters, here are our two cents on the 10 best My Hero Academia characters, ranked by their likability.

Despite coming off as intimidation on his first appearance in the series, Tenya is actually just a genuine and earnest person who tries to put his best foot forward no matter what he does. While serious and intelligent, he sure tends to jump to conclusions, and often acts on them quickly with no regard for how foolish he may seem. His antics and odd hand gestures are often listed as one of his most comical traits, but that’s not all there is to this character. Being class representative is no easy task, especially in a class full of peculiar heroes, but Tenya does his best to keep them in line, prioritizing safety and discipline above all. His dedication, humility, and eagerness make for a great aspiring hero, and one of the most likable characters in My Hero Academia.

Aloof and rarely emotional, Tsuyu always speaks her mind and wastes no time beating around the bush but is usually there for those she considers friends. Despite her few moments of vulnerability, her caregiving personality makes her a great source of support for others and allows them to depend on her in difficult situations, especially in a fight. Tsuyu learned to be responsible from a young age due to her absent parents, and her maturity comes into play a lot during the series as she manages to make logical decisions and stay focused even under extreme pressure. Her frog-like appearance is also an endearing trait, matching her quirk perfectly, and capturing the audience’s fondness.

Being the youngest character in My Hero Academia, Eri also has one of the most powerful quirks, which certainly makes for an amazing combination. What makes her one of the most likable characters in the series is her personality. This sweet child had a terribly unhappy life, being responsible for her father’s death due to her inability to control her power. Because of this, Eri grows up secluded and is unfamiliar with a number of usual events, like Christmas, never being shown kindness until she meets Deku. Over the course of the series, this character has to face the guilt related to her quirk and slowly begins a new life of happiness, with the help of her newly made friends, of course.

Right from the get-go, Ochaco is portrayed as a very kind and bubbly character, helping out Deku more than once during his entrance exam. Her empathy, sometimes extended even to villains, is one of her greatest strengths, allowing her to be on good terms with almost everyone she meets. It also makes her one of the most well-liked characters in the series. Despite Ochaco’s cheery nature, only a fool would think they can just walk over her. She can be quite serious and fierce when necessary, proving anyone who underestimates her wrong. While she’s not one of the most battle-ready characters, Ochaco’s determination to improve her fighting skills is admirable and makes for great character development over the series.

Mr. Aizawa is one of those characters whose likability just keeps on growing whenever he’s on screen. Both as a person and as a teacher, Aizawa displays a very nonchalant attitude, keeping mostly to himself and having a preference for working alone as an underground hero. Despite his reserved and apathetic nature, Aizawa has shown he cares for his students and wants to push them to greatness, even if by unorthodox means. He is also more than willing to protect them when necessary, and if he looks super cool doing it, that’s just a plus. Aizawa’s likability among viewers also partly comes from his simplicity, one of his most relatable traits, as he often prefers to lie down and puts minimal effort into anything he does.

As one of the most energetic characters in the series, Eijiro often delights the audience with his comic antics and straightforward nature, which also allows him to make friends easily. Eijiro is a very honorable and kind character, showing high respect for anyone that depicts qualities he considers worthy of a hero: bravery, willpower, and honor. Because of this, Eijiro has no trouble recognizing his own shortcomings and is determined enough to work toward fixing them, as he wants to become a great hero himself. The icing on the cake, though, is this character’s loyalty to his friends, and his resolve to be there whenever they need him, no matter what it takes.

Better known for his hero persona, All Might, this character seems to embody everything a hero should be: courageous, self-sacrificing, and kind. As the first person to ever see potential in Deku, All Might becomes his mentor, training the protagonist into an adequate vessel to receive his power, and helping him achieve his dream. All Might is also someone Deku idolizes, and a hero truly worth looking up to, saving people with a constant smile on his face despite how much pain he might be in due to his poor health. Righteous and mature, All Might is a character viewers can’t help but love, as both a hero and a symbol of peace for mankind.

Being temperamental and aggressive aren’t exactly the traits most people look for when considering their favorite characters, but Bakugo is the exception. During the course of the series, this character went from a despised bully to one of the fan favorites, mostly due to his development. With natural combat skills, this is one of the best characters to watch in a fight, whether he’s winning or losing. In fact, Bakugo’s failures are all necessary to break down his walls and his arrogant tendencies, leading to serious moments of introspection that help Bakugo better himself. Because of this, viewers come to appreciate Bakugo’s short fuse, as it becomes more comic relief than actual hostility.

As we all know, angsty characters with tragic backstories are often fan favorites, and Shoto is no different. Cold and solitary at first, this character feels a deep hatred toward his own quirk, as it reminds him of the brutality he went through as a child, and this earns him a great deal of sympathy from the audience. Of course, that’s not enough to become one of the most likable characters in My Hero Academia. Shoto’s popularity stems from having one of the most significant character growths in the series, reconnecting with the fiery power he left unused for so long, and opening himself up to others, showing the kinder side of his personality.

Izuku Midoriya, or Deku, as he’s best known, is the most likable character in the series. Despite being born without a quirk in a world where 80 percent of the population has one, Deku never stopped dreaming about becoming a hero, and this childish and dreamy nature is what captured the viewers’ hearts from the get-go. While timid and vulnerable at first, Deku’s determination to follow a heroic path is truly commendable, and eventually allows him to grow into a more self-assured person. Sure, it helps that he gets a transferable quirk along the way, but Deku’s potential for greatness was always there, reflected in his need to help others without a second thought. He is relentless in the pursuit of what he wants and unafraid to put the work in, which makes it a joy to see this character achieve his dreams.

In a series with so many great characters, ranking them is no easy feat. If you’re a My Hero Academia fan, by now you must be counting down the days left for the anime’s upcoming season, and, thankfully, the time is almost here. While you wait, though, be sure to check out all the available teasers and let the excitement build. My Hero Academia will surely not disappoint.