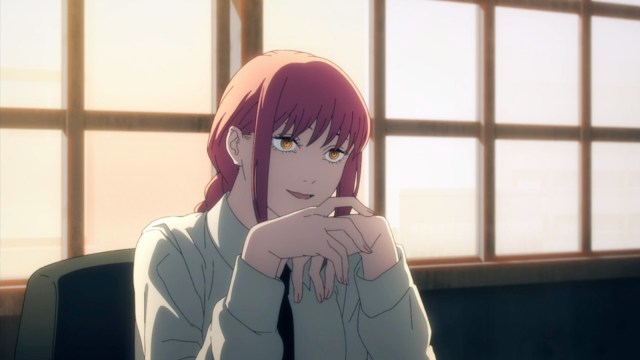 Makima made her debut at the end of the first episode of Chainsaw Man and there’s so much more to her than meets the eye.

When the Public Safety Devil Hunters showed up to take care of the devils in “Dog and Chainsaw,” they find Denji surrounded by the slaughtered devils. The Devil Hunters prepare to kill Denji, but she saves his life by stopping them and allowing him to join. This might have seemed like an act of kindness if it wasn’t for Makima’s ulterior motives.

In “Arrival in Tokyo,” Makima rides in a car with Denji who’s crushing hard on her. She tells him the terms of the conditions for joining the Public Safety Devil Hunters, and it involves him saying either “yes” or “woof.” Makima isn’t interested in a dog that says no, and that pretty much explains the nature of their relationship. Makima is looking for a pet she can control and her affection for him is a means to an end, not something she does out of actual interest.

Makima is willing to venture through uncharted territory to get the job done. She’s put together an experimental unit led by her co-worker Aki Hayakawa called the Public Safety Devil Extermination Special Division 4. It consists of the outliers of their world, like Denji whose pet devil Pochita is in his heart, giving him chainsaw abilities, and a Fiend named Power who uses her blood to construct weapons. Makima’s the one putting these teams together, and her knack for control speaks to who she really is.

Underneath her poised facade, Makima is actually the Control Devil with all the powers that come with it. She’s super-strong in her own right and has enhanced smell, which allows her to sniff out devils. Her most prominent power is her ability to dominate others through domination and fear. She’s supernaturally gifted in manipulating people, and she can force people into making contracts with herself or other devils.

Her abilities work on many groups of beings including humans, devils, Fiends, and hybrids, and her victims suffer memory loss when she exerts her control on them. She can even channel their power using a chain that’s connected to her, and she’s even controlled multiple creatures at once. Makima can also manipulate an invisible force that can deal great damage. She’s used force manipulation over a long distance, but it requires an elevated place like a shrine, the name of the target, symbols made with her hands, a white cloak to cover the eyes, and for the name of the target to be spoken.