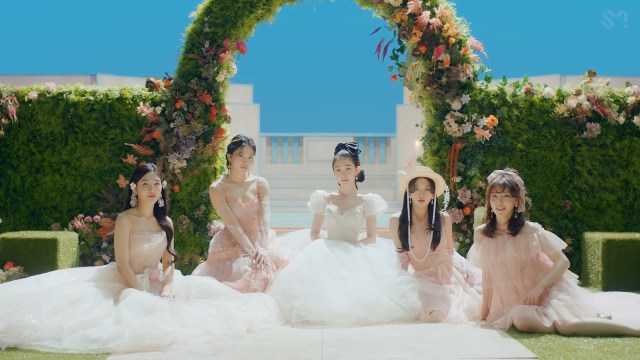 Red Velvet is a female Korean pop group composed of five members: Irene, Joy, Seulgi, Wendy, and Yeri. At the time of its debut in August 2014, the group only had four members, but Yeri joined her bandmates in March of the following year during the promotion period of Red Velvet’s first EP, titled Ice Cream Cake. From then on, the group kept growing, both in Korea and worldwide, becoming known as one of the most popular Korean girl groups alongside BLACKPINK, Twice, and MAMAMOO.

Red Velvet’s first single was titled “Happiness,” which landed at number four on Billboard’s World Digital Songs chart. The song’s genre is predominantly Euro-pop but features different types of music, which received mixed reactions from critics and the public. Unbeknownst to them, this would only be the first sample of Red Velvet’s versatility. Nowadays, the group is praised for the mix of genres in their discography, among which we can find pop, funk, electronic, R&B, hip-hop, and ballads. The band also tends to hide dark themes and messages in their music videos, which is always a cool treat. Not everyone likes to (over)analyze music videos, but in the Kpop scene, that’s a given, and it’s appreciated by most fans.

After a hiatus during the year 2020, the band made a comeback in 2021 with the EP Queendom, which is currently still active despite its members’ solo careers. The five singers manage to balance out individual projects with group activities quite nicely to the relief of Reveluvs, the band’s fandom.

If you have only recently become familiar with Red Velvet, and are looking to get to know each of its members a bit better, this is the place for you.

Irene is 31 years old by international standards. She is from the Korean city of Daegu, where she spent most of her life before being accepted as a trainee by SM Entertainment as an 18 year old. Irene trained for five years before Red Velvet’s debut, but during that time, she made a few appearances in magazines and YouTube videos released by the music company.

Irene’s real name is actually Bae Joo Hyun, and she is Red Velvet’s leader. That’s not her only role in the group, though. Irene is also its lead dancer, main rapper, a sub-vocalist, and the visual of the group—a concept in the Kpop world to describe the best-looking person in a band, the one that first draws the audience’s eyes. Besides her work in Red Velvet, Irene also has a solo career as an actress, having starred in several K-dramas over the years.

Although she’s best known by her stage alias, Joy is actually named Park Soo Young. She was born on Jeju Island on Sept. 3, 1996, but she spent most of her life in the South Korean capital, Seoul. Currently, she is 26 years old, which means she has been working under SM Entertainment for a decade as a sub-vocalist and lead rapper of Red Velvet.

Much like Irene, Joy has a passion for acting and began working in the industry in 2017, starring in the drama, The Liar and His Lover. She also has quite an extensive repertoire working as a TV show host but has always set aside time to work on her music. Joy officially debuted as a solo artist in 2021 with the EP, Hello. In the same year, it was revealed to the public that Joy was in a relationship with a fellow Kpop artist, Crush. The romance was generally well accepted among fans, and the pair is still together at the moment.

Son Seung Wan, also known as Wendy, is the main vocalist of Red Velvet, and she’s 28 years old. The singer was born on Feb. 21, 1994, in Seoul, and showed an aptitude for music from an early age. She learned to play several instruments, and her love for music only grew from there. In 2012, she joined SM Entertainment and began her training period, which lasted about one and a half years before debuting with Red Velvet.

Because she lived in Canada and the U.S. throughout her childhood and teen years, Wendy picked up English, which certainly comes in handy when trying to break into Western markets as a Kpop artist. Despite often collaborating on songs with other artists, Wendy’s official solo debut was in April 2021 with the album, Like Water. Early this year, she also debuted as a member of Got the Beat, a supergroup made up of established Kpop artists.

Unlike her bandmates, Seulgi’s real and professional names are the same. She was born on Feb. 10, 1994, in Gyeonggi-do, and is 28 years old. The artist joined SM in 2007 and trained for seven years before debuting as Red Velvet’s lead vocalist and main dancer. Besides her talent for singing and dancing, Seulgi also plays the guitar and is able to speak Japanese.

Seulgihas appeared in a few reality TV shows, the most prominent being Law of the Jungle in Mexico, and has participated in several collaboration songs with other Korean artists, among them Moonbyul from MAMAMOO, and BamBam from GOT7. In October, the singer released her first solo EP, 28 Reasons, marking her official solo debut. Like Wendy, Seulgi is now a member of Got the Beat.

Yeri is now 23 years old and is the youngest member of the group. She was born on March 5, 1999, in Seoul, and joined SM as a trainee at only 12 years old. Although it was always planned for Yeri to be part of Red Velvet, she was the last member to join due to her age. When the band debuted in 2014, Yeri was only 15, and SM Entertainment considered her too young then. When she eventually made her debut, as a 16 year old, she provided a different group dynamic, which some consider having been crucial for Red Velvet’s later success.

Like her bandmates, Yeri has dipped her toe into reality and variety TV shows and has collaborated with different artists over the years. More recently, she also starred in two Korean dramas, Blue Birthday and Drama Stage. As for her musical career, Yeri’s first solo song, “Dear Diary,” was released in 2019.

Now that you know more about Red Velvet’s members, it’s time to dig into their group and solo discographies. You won’t be disappointed by what you find.