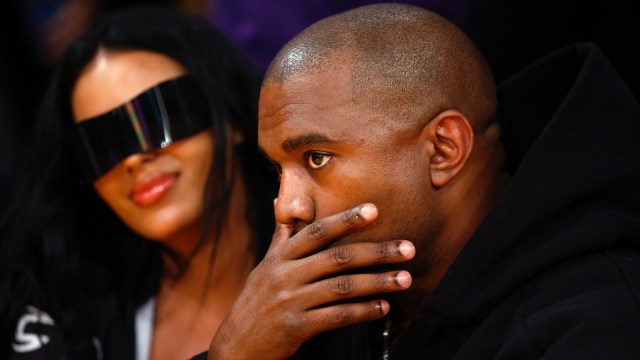 It’s hard to believe that Kanye West aka Ye could get into water hotter than what he’s currently bathing in but, like the genius he has oft proclaimed himself to be, Yeezy has figured out the perfect way to ice the monumental poo cake his reputation has become by allegedly proclaiming his admiration for Adolf Hitler.

Van Lathan Jr., a former TMZ staffer, has alleged that West claimed to love Hitler and the Nazis during his infamous 2018 visit to the TMZ studio, according to Forbes. Lathan made the claims during the latest episode of his podcast, Higher Learning with Van Lathan and Rachel Lindsay.

Lathan confronted the rapper during his 2018 visit when Ye now infamously stated that 400 years of slavery, referring to the chattel slavery of Africans and their descendants in the US, “sounded like a choice”. According to Lathan, the “Praise God” singer then expressed his admiration for Hitler and the nazis in comments that were later expurgated from the interview.

“[West] said something like, ‘I love Hitler, I love Nazis,’ something to that effect,” Lathan stated on his podcast.

“And they took it out of the interview for whatever reason—it wasn’t my decision.”

Lathan also stated that he, and another producer who is Jewish, confronted West after the statement and expressed their offense at West’s words.

The revelation is the latest in a string of controversies to surround Ye since his inflammatory interview with ultra-right-wing talking head Tucker Carlson. During the interview West maintained that the “White Lives Matter” apparel he has sported lately was meant as a joke but the rapper also made several bizarre and disturbing statements regarding “fake children” sent to his house to manipulate his children with ex-wife Kim Kardashian. He also expressed that black people are the real Jews, an anti-semitic conspiracy theory.

West also took to Twitter to express even more apparent anti-semitic speech, writing that he was “going death con 3 On JEWISH PEOPLE” and reiterating his belief that Black people are Jewish. As a result, both Twitter and Instagram are currently restricting West’s accounts.