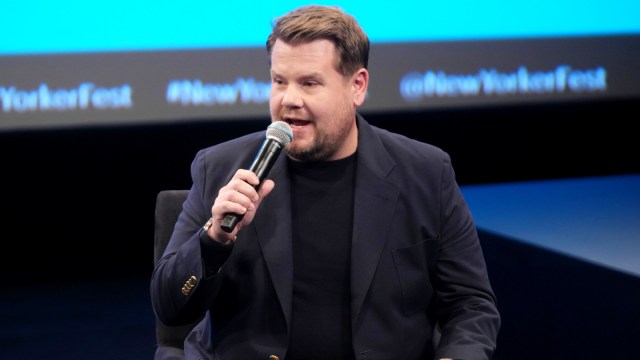 James Corden may be back in the good graces of New York City’s iconic French brasserie Balthazar restaurant, but it sounds like the tea has just begun to spill, if a TikTok video from Becky Habersberger, the wife of Try Guys member Keith Habersberger, is any indication.

Earlier this week, Balthazar’s owner Keith McNally put the late-night talk show host on blast, revealing on Instagram that the “tiny cretin of a man” had been banned from the restaurant after a couple of combative run-ins with staff. Just hours later, McNally pulled an about-face, declaring that Corden “doesn’t deserve to be banned from anywhere” after the 44-year-old apparently profusely apologized for his behavior.

But as it turns out, reports of James Corden not deserving to be banned anywhere may have been greatly exaggerated, as far as Habersberger is concerned.

“OK, there’s definitely something that celebos need to remember, and it’s that servers never forget,” Habersberger said at the beginning of the nearly three-minute long video.

As the 32-year-old explained, she used to be a waitress at a “super bougie” Hollywood Hills Hotel rooftop restaurant, and waited on a ton of celebrities at the time. Habersberger said that while some of them were “really awesome” and “super, super nice,” some were “total trash,” and that she remembers to this day which were trash.

“So I am not surprised by all this James Corden information coming out, because if you are rude to one server, you are absolutely rude to many servers,” she continued. “That is not just like a one-off, ‘I was having a bad day’ kind of thing, that’s like, you are trash.”

But interestingly enough, Habersberger’s story about Corden did not involve her personally serving him. Instead, she recalled one day when she lived in the trendy Los Feliz neighborhood of Los Angeles, and was walking by the famous Little Dom’s Italian eatery on her way to meet a friend for happy hour.

“And lo and behold, who walks out of the restaurant but one other than James Corden,” she dished. “And as I’m approaching, I hear James Corden yelling at this busboy. In my head, I’m like, ‘Oh my god, what’s going on?'”

“So, being the Nosy Little Nancy I am, I obviously beelined straight for them, right down the street,” Habersberger recalled. “And I overhear the busboy telling James Corden that Little Dom’s is closed right now — they close in the middle of the day between lunch and dinner. And he’s telling James Corden that he can get him a reservation right when they open, he was trying to be really accommodating.”

Habersberger finished her anecdote in that she made it to her own happy hour without incident, but that whenever she and her friends get frustrated about something, they evoke Corden’s “a lot of good that does me, mate!” to this day.

“Um, so feel free to use that one,” Habersberger added [editor’s note: we definitely will!]. “And um, I don’t think James Corden is sorry. Because if he were really sorry, he would have apologized to the server, not to the owner of the restaurant.”

It will be interesting to see if stories of poor behavior on Corden’s part will continue to bubble up to the surface — but as they say, when it rains, it pours, and we sure hope he has a good umbrella.