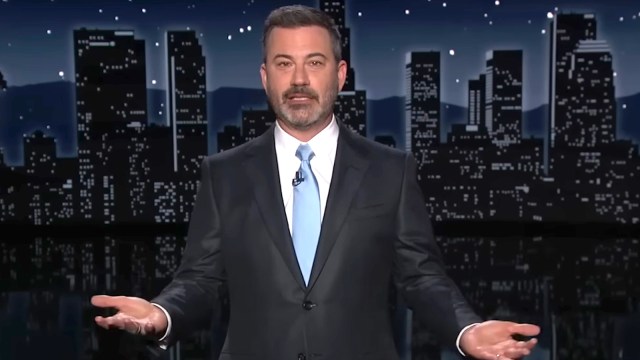 Jimmy Kimmel will be back to host the Academy Awards in 2023 for the third time after hosting in both 2017 and 2018. The late-night host will be taking the reins after last year’s “the slap heard around the world” incident which saw Will Smith strike Chris Rock after he joked about Jada Pinkett Smith’s alopecia. Kimmel is going to have to mention this at the ceremony, but just how well will that gag land?

Speaking to Extra about whether or not he will be bringing up the now infamous moment Kimmel said:

“It’s got to come up in some way. You know I don’t want to make light of it necessarily because comedians are mad about it. It’s one of those things that, for a group of people that find everything funny, it’s like not funny you know. … But you have to, just like when they read the wrong winner one year when I hosted the Oscars we had to make mention of that the next year. I think yeah there will be something.”

Kimmel is of course referring to another notorious Oscars blunder when La La Land was mistakenly announced as the winner of Best Picture thanks to a mix-up with the envelopes. It took several minutes and one of the most awkward moments in the award’s history to announce that Moonlight was the actual winner, causing the cast and crew of La La Land to have to vacate the stage.

Kimmel had his own blunder when presenting an award at the 2022 Emmys. He and Will Arnett came up with a gag bit to do when he presented the award for Outstanding Writing in a Comedy Series to Quinta Brunson.

He lay down on the stage as Brunta gave her speech standing above him, taking a little of the shine away from Brunta’s moment that many were quick to criticize. Asked whether he will host the Oscars lying down or standing up he responded, “I’ll be standing. I have learned my lesson” he said laughing, “I’ll be standing, in fact, I’m going to wear lifts.”

Hosting the Oscars is always a challenge and there have been a number of times when hosts have fallen flat with cringe-worthy jokes and or mean-spirited comments. Having a comedic late-night host is not the worst idea in the world, especially one who has experience in the field, but with so much having happened last year, let’s hope the 2023 Oscars run smoother and slap-free.