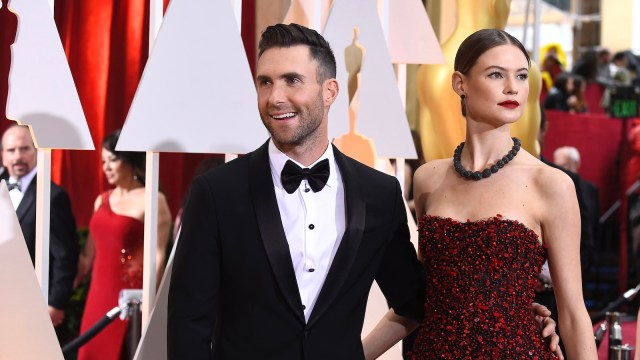 Adam Levine and Behati Prinsloo‘s decade-old romance is practically an anomaly in the rarefied air of A-list celebrity relationships which often last no longer than a handful of months. The couple has been together for ten years and married for eight but the pair are facing an intense wave of media speculation following allegations of Levine’s possible multiple infidelities.

The pair were often considered a model celeb marriage. The two appeared to have a stable home life with two lovely children and a third on the way and regularly gushed about each other on social media. They were a model of a serene married couple. So how did they get from there to the allegations which threaten them today?

Shortly after Levine’s 2012 breakup from model Anne Vyalitsyna, rumors began to swirl that the Maroon 5 singer had taken up with her fellow Victoria’s Secret Angel Behati Prinsloo. The Namibian-born Prinsloo was 24 years old at the time, nine years Levine’s junior. The two made it official in October, appearing together in public for the first time on the red carpet of GQ magazine’s Gentlemen’s Ball.

The new couple briefly called it quits in early 2013 — during which time Levine was linked to Sports Illustrated Swimsuit model Nina Agdal — but reconciled that summer and soon announced their engagement. In October Levine appeared on The Tonight Show and confessed to having been wary of marriage before meeting Prinsloo. “I still don’t necessarily think you have to get married unless you meet someone that makes you want to marry them,” he told host Jay Leno. “And then you marry them and it’s wonderful,” according to Entertainment Tonight.

In July Levine and Prinsloo tied the knot in Cabo San Lucas, Mexico at Flora Farms in front of nearly 300 guests. The ceremony was attended by a stellar array of entertainment and music A-Listers including Stevie Nicks and Robert Downey Jr. and officiated by Levine’s childhood friend, Academy Award-nominated actor, Jonah Hill.

Levine wasted no time in gushing over his new bride, telling Ellen DeGeneres during an appearance on her talk show, “I never really thought I would adore it. It’s so trippy. I’m a child. How did this happen? I say it a lot — ‘Wife, wife, wife,’ I love it. I even changed her number in my phone to ‘Wife,'” per Entertainment Tonight.

In March, Levine begins to drop hints that the couple may soon be welcoming an addition to the family during a radio interview with Ryan Seacrest, where he confesses to wanting 100s of kids. Prinsloo and Levine’s first child, a daughter named Dusty Rose Levine is born at the end of September. Ellen Degeneres helped pick the name after shooting down Levine’s other choices.

The couple’s second child, another daughter, Gio Grace, is born in mid-February. Prinsloo later shares a snap of Gio’s tiny feet on Instagram, joking that “She’s got her dads toes.”

Later that May, both Behati and Dusty join Levine in Maroon 5’s “Girls Like You” music video alongside Camila Cabello, Aly Raisman, Sarah Silverman, Gal Gadot, and Lily Singh.

In an October appearance on Watch What Happens Live With Andy Cohen, Prinsloo said that after a series of emails, meeting Levine in person for the first time, “We felt like we knew each other. It was kind of love at first sight because we had that constant back and forth,” according to ET. A few months later, she would gush about Levine’s parenting skills in an interview with Us Weekly.

“He’s a very hands-on dad. It’s awesome. I’m lucky,” Prinsloo told the magazine. Speaking of expanding the family, she said, “I definitely want these two to grow up a little more and experience the two of them together before I do another one, but I think there are more in the future for sure.”

Later that year, during an interview with USA Today, Prinsloo would admit to coping with postpartum depression during which Levine was “her rock.” “I had moments of postpartum after our first baby that I felt like it was coming through. But my husband was so incredibly supportive and always got me out of it,” she said. The same month as the interview, Levine would leave his longtime coaching position at The Voice after 16 seasons.

During an April appearance on Howard Stern, Levine shut down rumors that he and Prinsloo were expecting again. “No, she’s not currently pregnant,” Levine told Stern. “I think if I asked her to have another baby right now she’d punch me in the f**king face, because she’s not ready.”

In November, Prinsloo confirms that having two young kids was a handful but she doesn’t completely rule out a few more additions to the family. The model told Entertainment Tonight “We always knew we wanted a second one. So I think for me … when I had two babies under the age of two, I was just like, ‘Don’t even think about it!'” but added that “I do also want five kids.”

Earlier this month, things began to appear to be getting on track with the couple as they announced that they were expecting as expected and that a third child was on its way. But the rest of the month turned out to be a minefield as rumors began to emerge of Levine’s alleged affair with TikTok star Sumner Stroh, who used the video platform to claim that she and the singer had been conducting an affair with each other for over a year.

The accusation took a bizarre turn when Stroh claimed that Levine had sent her a text asking to name his new child, if it was a boy, after her.

Levine, for his part, has denied the affair but has stated that he “used poor judgment in speaking with anyone other than my wife in any kind of flirtatious manner,” in an Instagram Story. “I did not have an affair. Nevertheless, I crossed a line during a regrettable period of my life. In certain instances it became inappropriate.”

However, reports about Levine’s infidelities have continued to amass with two other women coming forward with new allegations.

“To be this naive and stupid enough to risk the only thing that truly matters to me was the greatest mistake I could ever make,” Levine states in his Instagram story. “I will never make it again. I take full responsibility. We will get through it and we will get through it together.”