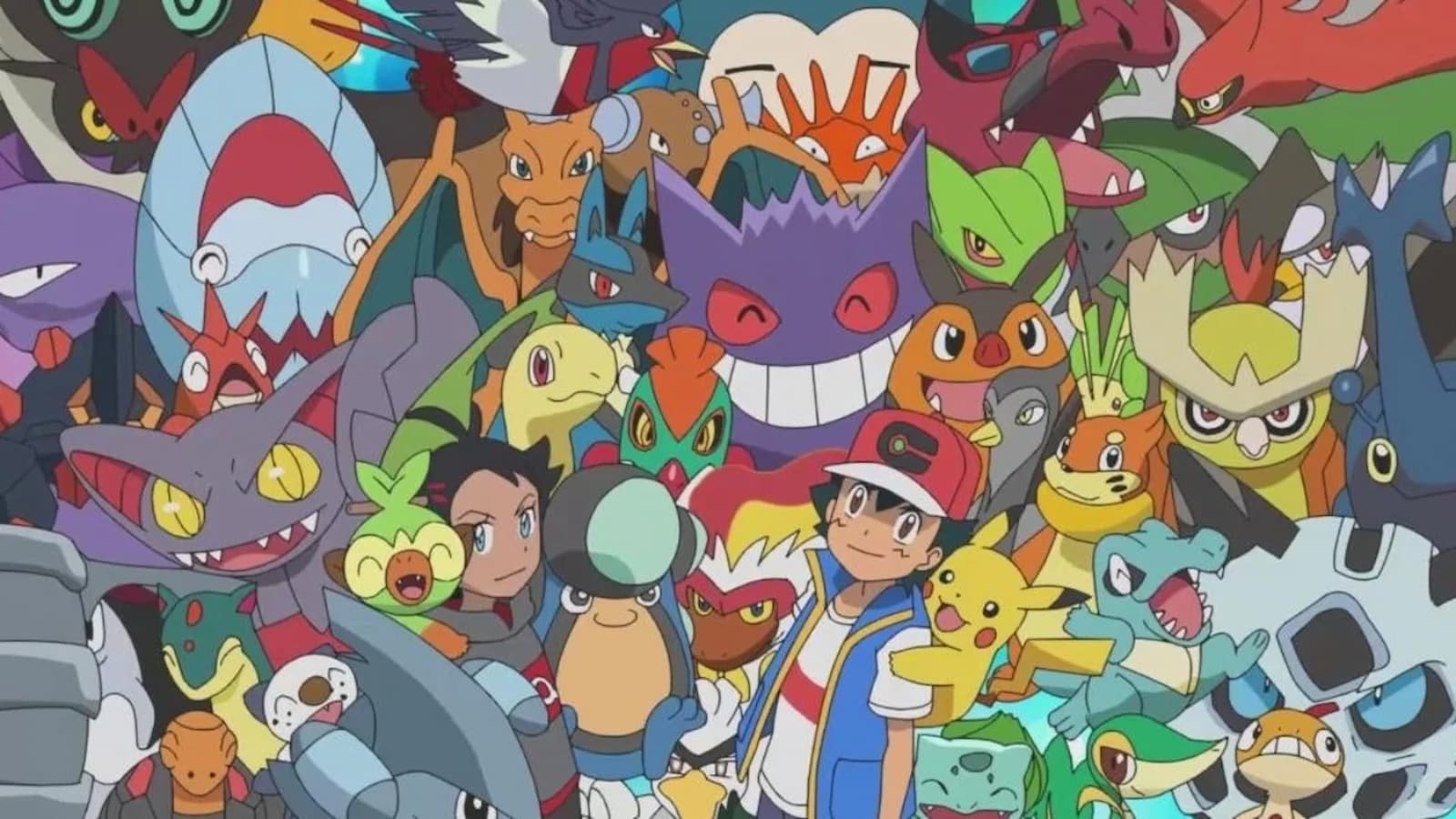 via the Pokémon Company

Since Satoshi Tajiri created Pokémon in 1995, there have been over nine hundred Pokémon introduced in tens of games, and many seasons of anime. These Pokémon consist of many different types and can be ranked in many ways, including by number, name, height, color, ability, and weight. Let’s take a look at ranking them by their weight, with the ten heaviest Pokémon, ranked. As a trainer tip, try using a Heavy Ball if you want to capture any of the following Pokémon.

Weighing in at the lightest on our list is the Temporal Legendary Pokémon first introduced in Pokémon Diamond and Pokémon Pearl. However, Dialga by itself is not part of this list, weighing in at 1505.8 lbs / 683kg while it is in its base form. But when you use the Adamant Crystal in-game, you can transform the Pokémon into its Origin Forme, which increases its weight, changes its appearance, and changes its statistics. While in its Origin Forme Dialga weighs in at 1871 lbs / 848.7 kg.

Dialga was the mascot for Pokémon Diamond and Pokémon Brilliant Diamond, appearing on their box art and on their start-up screens. Dialga wields the power of time and can create its own dimension. These powers probably have something to do with why the Legendary Pokémon is so heavy. Dialga is a Dragon-type and Steel-type Pokémon and he is #483 on the National Pokédex.

This Dark-type and Dragon-Type Pokémon is #799 on the National Pokédex and it is the ninth heaviest Pokémon on this list weighing in at 1957.7 lbs / 888 kg. Guzzlord was introduced in Generation VII with Pokémon Sun and Pokémon Moon. It is one of the Alolan Ultra Beasts and is not the only Ultra Beast to be on this list.

Living up to its name, Guzzlord’s in-game description references the fact that it is always eating, and it has apparently eaten buildings and mountains, so no wonder Guzzlord is one of the heaviest Pokémon of all time. Guzzlord also holds the title of heaviest Dark-type Pokémon.

Mudsdale, like Guzzlord, was also introduced in Generation VII with Pokémon Sun and Pokémon Moon. #750 on the National Pokédex, Mudsdale takes the eighth spot on this list weighing in at 2028.3 lbs / 920 kg. It is a Ground-type Pokémon that resembles a horse, and it evolves from Mudbray starting at level thirty.

Mudsdales are not just heavy for a horse either, it is tall as well, at 8’02” / 2.5 m. Canonically parts of a Mudsdale are covered in wet and hardened mud, which would account for the immense weight of the Pokémon.

Metagross is #376 on the National Pokédex and it is the final form of Beldum, evolving from Metang starting from level forty-five. It is a Steel-type and Psychic-type known in the Pokédex as the Iron Leg Pokémon. When Metagross Mega Evolves into Mega Metagross – by using a Mega Stone – its form is achieved by linking itself, a Metang, and two Beldum together, creating a behemoth of a Pokémon. Out of every Mega Evolution, Mega Metagross is the heaviest.

Groudon was also introduced in Generation III, appearing in Pokémon Ruby and Pokémon Sapphire. The Ground-type Legendary Pokémon weighs in at 2094.4 lbs. / 950 kg and is the sixth heaviest Pokémon on this list. Groudon was the mascot Pokémon of Pokémon Ruby appearing on its box art and on its start-up screen. Groudon, along with the other member of its Legendary duo Kyogre and the third latecomer Rayquaza, is a sort of prehistoric Pokémon dubbed a super-ancient Pokémon.

The Legendary Pokémon is #383 on the National Pokédex and has no evolutions. Groudon is designed to look like a dinosaur with his skin being as hard and tough as metal, adding to his weight. This is not even the heaviest that Groudon can get, but more on that later.

Eternatus is the fifth heaviest Pokémon on this list, and is tied with Groudon, but edges it out on a technicality. The Legendary Pokémon was introduced in Generation VIII in Pokémon Sword and Pokémon Shield. It holds #890 on the National Pokédex and is a Poison-type and a Dragon-type. When in its basic form Eternatus weighs 2094.4 lbs / 950 kg.

When in its base form it is the heaviest of all the Dragon-type Pokémon and of all the Poison-types. It is also the tallest Pokémon overall measuring 65’07” / 20 m tall. The reason this Pokémon comes in before Groudon is a slight cheat: it has another form, the Eternamax Eternatus, but this form cannot be caught. The weight of this form is unknown but as it is 380’01” / 100 m tall the form surely weighs much more than the original. But because this form of Pokémon cannot be caught, it does not warrant its own entry.

You have read that right, Groudon has made the list a second time, only this time it is Groudon in its Primal form. Primal Groudon weighs a little more than Groudon and weighs 2204 lbs / 999.7 kg coming in at number four. There are not many differences between Groudon and Primal Groudon, although Primal Groudon is the mascot for Pokémon Omega Ruby — the remake of Pokémon Ruby.

One of the more interesting Pokémon on this list, Cosmoem is a Legendary Psychic-type Pokémon that is the third heaviest Pokémon. Cosmoem was introduced in Generation VII in the games Pokémon Sun and Pokémon Moon. At level fifty-three, it evolves into either Solgaleo or Lunala depending on the game, but no matter the game it will evolve from Cosmog when you reach level forty-three.

Even though Cosmoem is half the size of Cosmog measuring at 0’04” / 0.1 m, Cosmoem holds the record for the highest weight increase from its evolution, as Cosmog weighs only 0.2 lbs., while Cosmoem weighs a massive 2204.4 lbs / 999.9 kg. Cosmoem is also the smallest and the heaviest Psychic-type Pokémon. It is #790 on the National Pokédex and has a spatial design, in fact, its weight and size are most likely a reference to a black hole.

Celesteela is tied with Cosemoem, weighing the same amount 2204.4 lbs / 999.9 kg. However, we’ve put it at number two because unlike Cosmoem, it is not a Legendary Pokémon. Celesteela is a Steel-type and Flying-type Pokémon that was introduced in Generation VII in the games Pokémon Sun and Pokémon Moon, like Cosmoem. Like Guzzlord, Celesteela is also an Ultra Beast.

Celesteela is #797 on the National Pokédex and — discounting the alternate forms of some other Pokémon — it is the heaviest Steel-type and Flying-type Pokémon. Celesteela’s weight can be accounted for by what it is made out of. Its metallic body stores energy, which can be used to send the Pokémon into space, much like a space shuttle. Celesteela has no evolutions, prior or otherwise.

The heaviest Pokémon on this list is the heaviest Pokémon only by a technicality. Copperajah ordinarily weighs less than all the other Pokémon on this list at 1433 lbs / 650 kg however with its Hidden Ability, Heavy Metal, the Pokémon weighs a spectacular 2866 lbs / 1300 kg which is much heavier than both Cosmoem and Copperajah. Copperajah is a Steel-type Pokémon and is, therefore, the heaviest Steel-type, if counting its Hidden Ability. Heavy Metal doubles the weight of whichever Pokémon possesses the ability.

Copperajah can be evolved from Cufant at level thirty-four and it is #879 on the National Pokédex. The Pokémon was first introduced in Generation VIII in Pokémon Shield and Pokémon Sword. Cooperajah looks like it was based on an Indian elephant. While the Pokémon resembles an elephant, which are quite heavy, the copper mixed in with its skin undoubtedly adds to its weight.