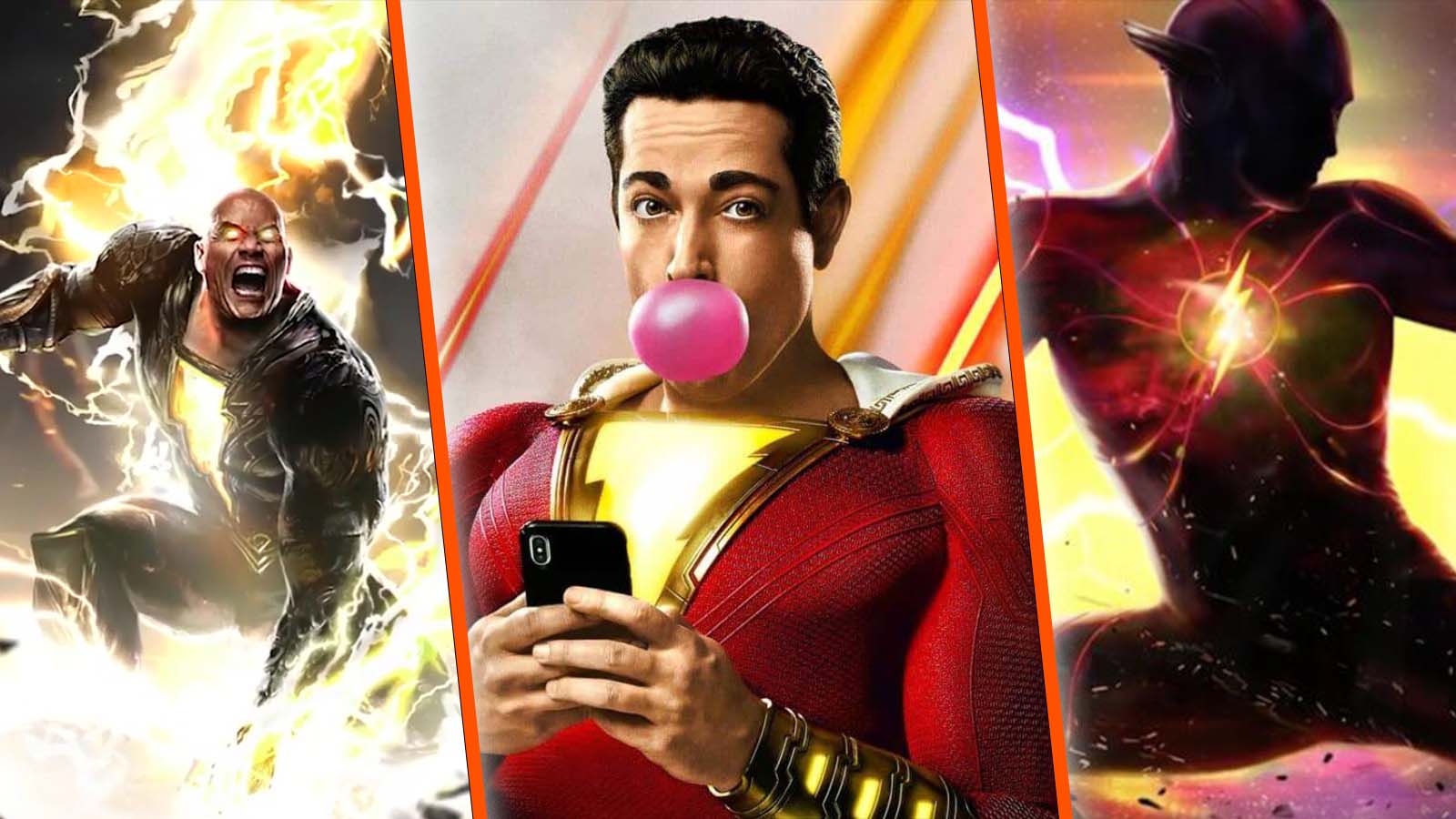 The DCEU has a full lineup of movies, shows, and streaming series slated for release in 2022 and 2023. To help you plan your viewing schedule, here’s what’s been confirmed so far.

The next two years could be pivotal for the DCEU. With all the changes happening at WarnerMedia after the merger with Discovery, there is an increasing angst growing amongst the DC faithful. As it stands, the DCEU has a packed schedule heading into summer blockbuster season, and the slate of projects looks poised to deliver plenty of sci-fi action, adventure, and a dose of humor.

With that in mind, let’s examine the current itinerary for DC’s upcoming movies and shows between now and next year.

The Superpets are getting their moment in the spotlight in a film that kids will surely fawn over. The superpowered animals have become something of a running gag in the modern era. It all began in 1955 during a time when comics were targeted at the younger crowd. That year, the publisher introduced Krypto the Super-Dog and Ace the Bat-Hound. Their popularity with younger audiences opened the gate for Streaky the Super-Cat, Beepo the Super-Monkey, and Comet the Super-Horse. Over six decades later, the League of Superpets will finally get their own movie with A-list talent Dwayne “The Rock” Johnson and Kevin Hart voicing Krypto and Ace.

The official plot summary is that the members of the Justice League have all been kidnapped. That leaves it up to Krypto to lead a band of super-powered animals to the rescue, and hilarity will inevitably ensue.

This could be the game-changer for the DCEU. Fans of the Snyder-verse, feel free to lament the loss.

After years of the dark and brooding DC helmed by director Zack Snyder, the WarnerMedia executives decided to go the Marvel Studios route. Aside from The Batman, the new DCEU has been more focused on providing lighthearted action comedies. With Dwayne Johnson in the title role, rest assured it will be an action comedy, as that is his specialty.

Going forward, Black Adam could be the focal point of the next wave of DCEU projects as the studio shifts its gaze from the Justice League to a classic Golden Age team: the Justice Society of America.

Similar to how Batman v Superman: Dawn of Justice kicked off the infamous Justice League movie, Black Adam is laying the groundwork for the JSA. Along with the titular antihero, Black Adam, the film also features the DCEU debuts of Doctor Fate, Hawkman, Cyclone, Isis, and Atom Smasher. Put those characters together and you have the Justice Society, a team that first appeared in 1940’s All-Star Comics #3. This could be DC’s answer to the Avengers in the DCEU’s new era.

Titans will continue to build its Robin mythos when it returns for a fourth season. One of the main focuses of the hit show has been the evolution of Robin. Fans have seen Dick Grayson leave Gotham City to lead the Titans and transition to Nightwing. Meanwhile, his successor, Jason Todd, arrived on the scene before he took up the Red Hood mantle.

This season, audiences are expecting to see the third Robin, Tim Drake, make his live-action debut. How long he will remain as Batman’s sidekick remains to be seen. If he follows Dick and Jason’s lead, he will leave the Robin costume behind and take up his own vigilante role as the unfortunately named Red Robin (“Yum!”). Maybe the Titans creative team will give him a better moniker.

When will we see the new episodes? Originally, fans had hoped that the season premiere would have been this month, but that is highly unlikely. At this point, it looks season four should reach HBO Max sometime in the fall or possibly winter of 2023.

Although Neil Gaiman’s masterpiece The Sandman falls under the DC banner, this is anything but a superhero series. Bordering between fantasy and horror, Sandman follows Morpheus, the god of dreams. In the comics, the first story arc begins when Morpheus is accidentally imprisoned by a cult looking to secure immortality. The problem is that its spell ensnares Dream rather than his sister, Death, and he is held prisoner for decades. When the spell is broken and Morpheus is free, the dream world is in disarray. His magical items are scattered across Earth and Hell and nightmarish monsters are wreaking havoc on unsuspecting mortals.

The comic was originally featured under DC’s Vertigo label, an imprint that allowed for more experimental fiction outside the DC continuity. During the 1980s and ‘90s, Vertigo was aimed at more mature content. Along with Sandman, the brand also published groundbreaking comics like V for Vendetta, 100 Bullets, DMZ, Hellblazer, and Preacher.

Sandman’s Netflix series is in the works, but the studio has not given a firm release date nor a trailer. As of the time of this writing, the indication is that the first season will premiere sometime in November.

No one seems to know when this hit animated series will return for a third season, but rest assured, season three is on the way. During DC’s Fandome virtual convention in October of 2021, the company released a three-minute teaser. While DC Animation originally targeted early 2022 for the series premiere, the studio announced last month that it had finally finished with sound mixing. Despite all the delays, Harley fans, you will eventually see her reemerge on the small screen. When that will be is anyone’s guess, but the day is coming.

Shazam! Fury of the Gods

Although there is a teaser trailer, not much is known about the Shazam! sequel. The first film was a surprise hit for the DCEU that delighted audiences with its comedic take on the original Captain Marvel. In fact, from his early days at Fawcett Comics beginning with his first appearance in 1940’s Whiz Comics #1, he was the one and only Captain Marvel well before Marvel Comics existed. After Fawcett went out of business, DC Comics secured the rights to the character in the 1970s, though they unofficially renamed him Shazam to avoid confusion with Marvel’s character. However, he was still referred to as Captain Marvel and he and his siblings continued to be called the Marvel Family.

Speaking of the Marvel Family, they gained their powers at the end of Shazam!, and it would seem that they will do battle with a couple of goddesses from Ancient Greece. Past that, not much is known about Fury of the Gods. Since Black Adam is traditionally a Shazam villain, there is speculation that Dwayne Johnson will make a cameo in FotG.

For the past year, the major DCEU news has been the return of Michael Keaton to the world of Batman. He etched his name into comic book history when he was Tim Burton’s unlikely choice to don the cape and cowl for 1989’s Batman as well as the 1992 sequel, Batman Returns. Fans rejoiced when DC officially announced that Keaton will reprise his role as Bruce Wayne/Batman for The Flash. Before that potential blockbuster hits theaters in 2023, he will suit up for Batgirl.

Along with Keaton, fans will get their first live-action Batgirl since Yvonne Craig’s performance in the 1960s Batman television series. This time around, Leslie Grace will sport the famous costume as she battles Brendan Fraser’s Firefly.

While no exact release date has been given, producer Michael Uslan’s social media post hinted at a possible December premiere, although that is not written in stone.

Another question mark in the DCEU lineup is Doom Patrol. If you haven’t watched this show, we strongly recommend you stop what you’re doing and give it a try. Think of it as Guardians of the Galaxy with an R-rating. Since these are virtually unknown characters in the eyes of mainstream audiences, the show’s writers and producers are able to be as odd and irreverent as they please. The result is a cast of characters straight from a 1960s sci-fi B-movie with plenty of horror and comedy.

A fourth season of Doom Patrol is in the works, but the timeframe for the premiere is sketchy. At this point, all that is known is that it should happen sometime this year.

Aquaman and the Lost Kingdom

It’s been five years since Jason Momoa’s Aquaman became one of the surprise hits of 2018. Although a bit lacking in special effects ⏤ at least compared to other comic book movies ⏤ and fully embracing the Golden and Silver Age comic roots in all its campy glory, fans fell in love with Arthur Curry. In fact, along with Wonder Woman, the movie helped keep the hopes and dreams of a DCEU alive. After the Joss Whedon cut of Justice League massively underwhelmed at the box office, the entire multiverse was in danger of being scrapped. Aquaman helped convince studios executives that the DCEU was still a viable property.

Much is riding on The Flash. Before there was talk of interdimensional friends and enemies invading the MCU’s Spider-Man: No Way Home, DC was capturing imaginations with the news and rumors surrounding The Flash. It culminated in the major announcement that both Keaton and Ben Affleck would return to the DCEU as their respective Batmen. Since then, WarnerMedia has cast Sasha Calle as the newest Supergirl, and the Flash teaser gave audiences a sneak peak of two Barry Allens in the movie.

Due to the pandemic, the release date for The Flash has been pushed around. What doesn’t help matters is Flash star Ezra Miller’s string of bad press. In recent weeks, the actor has been arrested for altercations in Hawaii. Although WarnerMedia and DC have publically remained quiet on the matter, fans are concerned. There’s a growing sentiment that the studio should recast the part, and Grant Gustin supporters want the CW’s Flash to take over the part. That seems unlikely at this point, but it casts a dark cloud over what should be a major release on the 2023 schedule.

As the DCEU takes a page from Marvel’s playbook and targets the teenage audiences, the company could have its new star in Jaime Reyes. A Blue Beetle movie is in development, and WarnerMedia has cast Cobra Kai’s Xolo Mariduena in the lead along with Susan Sarandon as the villain, Victoria Kort.

Blue Beetle is a Golden Age character created for the defunct Charlton Comics in the 1939. Over the decades, there have been three different characters to don the title. The most famous of those was Ted Kord, a scientist with no special powers. Instead, he took a page from Tony Stark’s guide and invented high-tech crime-fighting solutions. After his death, DC returned to the Beetle’s magical roots as Jaime was chosen by the scarab, thus giving him control over an intergalactic suit that can basically do anything.

Jaime has been gaining a more mainstream following for the past decade. He was an animated regular on the tongue-in-cheek Batman: The Brave and the Bold as well as Young Justice. If DC plays its cards right, he could be the DCEU’s next breakout star.

Anyone want to buy a television network? Parent companies WarnerMedia and Paramount have put The CW up for sale, which has left some questions about the future of the Arrowverse. Despite the potential change in ownership, the CW has extended Superman & Lois for a third season. Overshadowing that announcement was the confirmation that, yes, there will be a ninth season of The Flash. As for the rest of the Arrowverse, those series remain in limbo, though experts see them being renewed as well.