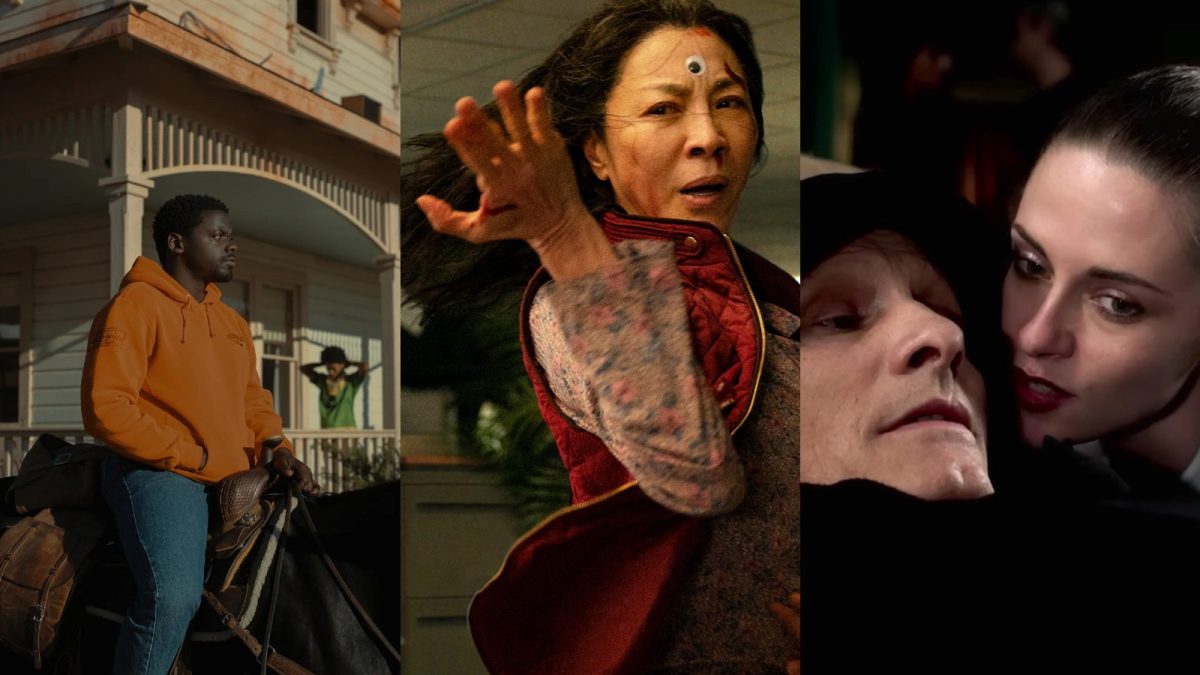 Photos via A24, Canadian Broadcasting Company

This year, we made it back to movie theaters if Tom Cruise had anything to say about it (and yeah, looks like he did.) So did some some googly eyes, hot dog hands, bagels, family drama, hibachi grills, sesame seeds…ok, we can’t list everything Michelle Yeoh encountered, not in this part of the multiverse, anyway. While not all superheroes fared well in 2022, Robert Pattinson was convincing as a man with no friends when he stepped into the cape.

But not everything was that flashy. What if a guy didn’t want to be friends with another guy anymore? What if your dad isn’t the person you remember? What if your crush removes organs on stage?

Here are We Got This Covered’s best movies of the year.

There is no denying that what Ryan Reynolds does is play himself, with slight variations, in all his films. But what is also not deniable is the actor’s palpable charm, which received its overdue recognition in Deadpool and has since not lost its steam. He does the same in The Adam Project, which picks up the well-liked yet done-to-death plot of time travel.

Honestly, if it had been another actor spewing the lines that succeeds in endearing Reynolds’ Adam to my heart, I would have written the film off as another cliched flick that doesn’t make any effort to understand the nuisances of extensively debated phenomena like time-travel.

But because of Reynolds, as well as thanks to his epic chemistry with Walker Scobell (young Adam) and Mark Ruffalo (his dad), whenever I found myself straying to the glaring plot holes in the film, his charismatic presence made it impossible to dwell on the mistakes much, to the extent that The Adam Project is now one of my top favorite sci-fi films. Apparently, Mr. Reynolds doesn’t need MCU’s superpowers to flex his rather fine perception-altering prowess. — Apeksha Bagchi

Writer-director Charlotte Wells’ first film expertly melds two versions of the same story into one. As Sophie, Frankie Corio brilliantly plays Sophie, a girl spending rare time with her single dad Calum (Paul Mescal) on vacation. Mescal (Normal People) makes a case for his staying power, at one moment overstuffed with charm and the next downright piteous.

As present-day Sophie revisits camcorder footage from that week with fresh eyes, the glow she’s held in her heart all these years from that week fades. With a dreamlike quality, Aftersun doesn’t provide a straightforward account of events, but opens up the possibility that we’ve been telling ourselves the wrong stories. — Tricia Gilbride

The Banshees of Inisherin

Director Martin McDonagh’s last cinematic effort Three Billboards Outside Ebbing, Missouri scored Oscar gold for co-stars Sam Rockwell and Frances McDormand, and his latest, The Banshees of Inisherin, seems well on track to do the same for Colin Farrell, who reunites with his In Bruges partner Brendan Gleeson for this black comedic look at male friendship. Set on the fictional remote island of Inisherin in 1923 Ireland, the film follows Farrell as a somewhat feckless farmer attempting to make sense of his completely unexamined life after his best friend (Gleeson) no longer wants anything to do with him. McDonagh is at his best here, telling a heartbreaking story about a breakup between two men who may never have actually known what they meant to each other. The aftermath proves equally hilarious, tragic, and even disturbingly violent in this meditation on male intimacy that proves to be one of the most arresting and interesting films of the year. — Beau Paul

There was a lot of anticipation surrounding Matt Reeves’ vision for a character as iconic, yet incredibly overdone, as Batman/Bruce Wayne. With the casting of Robert Pattinson, Paul Dano, and Zoë Kravitz, everyone believed this could be the return of a more mature tone for superhero movies – something we hadn’t seen since Logan. The result did not disappoint. Reeves’ The Batman is an ode to late 90s/early 2000s crime thrillers that gifts audiences with a modernized version of the Dark Knight, while maintaining the nitty gritty of Gotham’s underworld, elevated by a majestically gothic set design, photography, and score. The web of intrigue and characters is orchestrated to perfection in the directing, writing, and editing, to deliver the breath of fresh air that the genre was begging for. The Batman is now, undeniably, the standard. — Francisca Tinoco

While the movie had its debut at Fantasia Fest in 2021, 2022 was the year cinema audiences got to experience Scott Derrickson and C. Robert Cargill’s horror-thriller. And it was well worth the wait.

The movie follows Finney Blake. A boy kidnapped by “The Grabber,” a serial child abductor. Locked in The Grabber’s basement, Finney must try to find a way to escape. However, when a disconnected phone in the cellar starts to ring, Finney finds that he might not be alone in this endeavor.

A gripping tale packed with suspense and twists, this movie will have you hooked from beginning to end. Plus, Ethan Hawke puts in a career-defining performance as The Grabber, imbuing the character with a creepy realness that will send shivers down your spine. — Jonathon Greenall

Crimes of the Future

The fact that David Cronenberg’s Crimes of the Future was shackled with such a limited theatrical presence is itself a crime of the present, but those with the right mixture of curiosity, awareness, and a little bit of luck got to bask in not only another masterclass from the grandfather of body horror, but quite possibly the best sci-fi film of the year.

Starring Viggo Mortenson, Léa Seydoux, and Kristen Stewart, the film follows the plight of Saul Tenser (Mortenson), a man who’s afflicted with “Accelerated Evolution Syndrome,” which causes his body to grow never-before-seen organs. His partner, Caprice (Seydoux), surgically removes the organs as part of the duo’s performance art, but as Saul begins to develop a new relationship with his body coupled with the National Organ Registry’s perverted interest in him, he finds himself in the middle of a political and emotional crossfire.

It’s a delectable, relishing commentary on bodies, autonomy, and the tragedies of science, and while Cronenberg’s body horror never fails to make audiences squirm, it’s digestible enough that even the more squeamish of viewers could glean just as positive an experience from it as those who live for the auteur’s macabre stylings. — Charlotte Simmons

Everything Everywhere All At Once

Directing duo Daniels managed to do something almost unheard of in 2022 — release a wholly unique and chaotic blockbuster with true heart. Using the trappings of sci-fi and action (and a stellar cast), Everything Everywhere All At Once is a heartfelt, sincere, and completely fun interdimensional ride. You have to admire a film that manages to be a breakneck crowd pleaser as well as an emotional powerhouse with a potent message: across dimensions, living with chaotic, defiant joy and caring for each other are the most radical acts anyone can do. — Alejandra Martinez

An underrated part of many great horror films is their ability to make you laugh while scaring or thrilling you, and Mark Mylod’s The Menu does this perfectly. From the moment Margot (Anya Taylor-Joy) sits down to eat until the film reaches its explosive conclusion, it is absolutely hilarious, and easily one of the best films of the year. The Menu manages to examine the plight of an artist, and the role of criticism in that art, while never failing to twist its commentary into an applaudable gag, including the name and the contents of the dishes served up. Does anybody want a cheeseburger? – Trystan Akbas

There are many moments that seem to ensnare you when watching Nope.

From that opening, startling scene to when it comes full circle about midway through the movie, graphically showing, well, more like submerging you in the experience through sound, the true terror of what that opening scene of a monkey is all about and how it ties into the movie.

When the film starts in earnest, the intrigue and disorientation take a much subtler stance. The power and majesty of horses runs wild through the film, with humans’ use of the beasts and taming of them for many, many purposes juxtaposed with the alien that’s lurking, hiding, up in the clouds, and the humans who try to break it, or bend it to their will.

All the while, the storytelling is stellar as seen through the eyes of a handful of protagonists, and their reflections of a world that they are, literally in some respect, on the outskirts of. Coming off of a small letdown with Us, it’s best to watch Nope without putting it through the lens of Jordan Peele’s other work. His third movie is full of scenes that will take your breath away, both because of the beauty in the cinematography and scenes, and because of the horror immersed in those very same things as well.

One of the best movies of the year? Yup —  Habeab Kurdi

We can confidently predict that Till will likely sweep the Oscars, especially for lead actor Danielle Deadwyler’s heartwrenching performance as the bereaved mother Mamie Till-Mobley. The biographical drama is about a woman who was transformed by the callous kidnapping and lynching of her 14-year-old son, Emmett Till, the highly publicized murder victim whose killers were never found guilty for their crimes.

Deadwyler absolutely anchors the movie with her tremendous turn as Mamie, but Jalyn Hall also deserves praise for his captivating performance as Emmett. What’s more, director Chinonye Chukwu masterfully weaves together elements of tragedy, political and courtroom drama, and even horror in a story that deserves to be remembered for decades to come. Far from being a typical “womb-to-tomb” biopic, the story wisely focuses on a single month in Mamie’s life in an excellent example of present-tense storytelling. The murder and its aftermath ultimately transformed Mamie — and the nation — forever. — Danny Peterson

Top Gun: Maverick is hands down the one film that saved cinema in 2022. This might sound like a bold statement, considering the embarrassment of riches this year has offered audiences, but nonetheless people will look back and remember 2022 as the moment Tom Cruise turned it around.

The original was an MTV video with fighter jets, which got by with on-screen presence and a killer soundtrack. Thirty-six years on, Pete ‘Maverick’ Mitchell is a different animal and so is the film industry.

Top Gun: Maverick is a million miles away from Tony Scott’s rock opera in the sky. Tom Cruise crafts a performance that gives Maverick depth, offers him catharsis, and does it all on a huge scale. This is not high art, but neither is it really high concept – as there are really stakes involved that go beyond the mission. With some solid support and every puzzle piece in place, Top Gun: Maverick is the cinematic equivalent of lightning in a bottle.  — Martin Carr