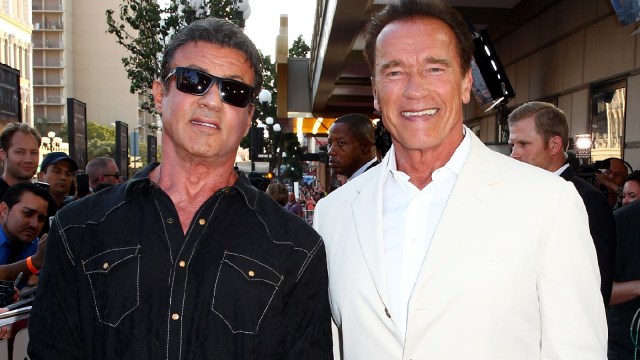 Having spent decades as intense rivals battling for complete dominance of action cinema, genre icons Sylvester Stallone and Arnold Schwarzenegger have since gone on to cultivate one of the most unexpectedly wholesome bromances in Hollywood.

Whether they’re overcompensating by carving tiny pumpkins with giant knives, or lavishing praise on each other as “the last two tyrannosaurus” in the industry, the ass-kicking heavyweights put their differences to one side long ago.

Things got so heated and conniving that Schwarzenegger even pulled one of the greatest trolls in the history of the movie business by faking interest in the terrible script for Stop! Or My Mom Will Shoot entirely to encourage his arch-nemesis to sign on for what went on to be regarded as one of the worst movies of his career, which is malevolent genius at its finest.

In an interview with Forbes to promote his impending small screen series Tulsa King, Stallone admitted that he and his fellow musclebound meathead had an active disdain for each other that transcended a mere professional rivalry.

“We really disliked each other immensely because we were… this may sound a little vain, but I think we were pioneering a kind of genre at that time and it hasn’t been seen since really. So the competition, because it’s his nature, he is very competitive and so am I… and I just thought it actually helped, but offscreen we were still competitive and that was not a healthy thing at all, but we’ve become really good friends.”

It’s heartwarming to know the pair are more likely to be found hanging out doing manly men things these days rather than trying to sabotage each other’s careers, even if Schwarzenegger won’t be reuniting with Stallone onscreen for next year’s The Expendables 4.