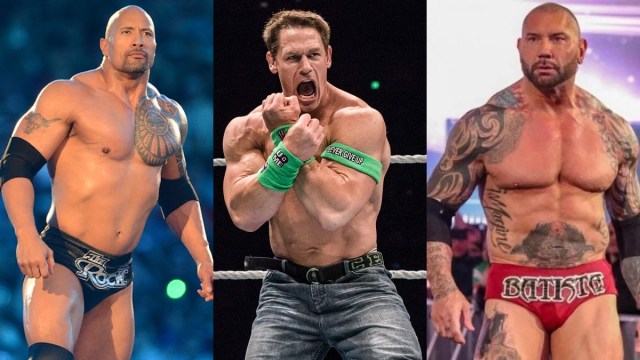 via WWE
Review of:

Based on the careers enjoyed by Dwayne “The Rock” Johnson, Dave “Batista” Bautista, and John “John Cena” Cena, it’s not out of the question to expect countless professional wrestlers to have one eye on Hollywood as their careers in the squared circle draw to a close, or even while they’re still at their professional peak.

26 year-old Maxwell Jacob Friedman recently boarded Zac Efron’s The Iron Claw, but it remains to be seen whether he’ll end up matching the aforementioned trio, or go down in a ball of cinematic flames like Hulk Hogan and Stone Cold Steve Austin, who simply couldn’t parlay their in-ring success into sustainable cinematic glory.

Cena and Johnson have both appeared in the Fast & Furious franchise and DCU but have yet to cross paths, while Bautista hilariously isn’t interested in co-starring with either of them. The Rock might be the most famous, highest-paid, and most bankable of the three heaviest hitters, but a raging debate on social media indicates that fans don’t view him as the best of the bunch.

Bautista is currently winning by a landslide, and it’s hard to argue that he’s displayed the most range and variety of the three. Johnson almost always plays thinly-veiled versions of himself, Cena is much better at comedy than he is at drama or generic action-orientated heroism, but the Guardians of the Galaxy star has proven he can do it all.

He’s got comic book blockbusters, acclaimed sci-fi epics, intimate character studies and plenty more under his belt, so maybe it’s not that much of a shock after all that he’s emerged as the victor by a landslide.