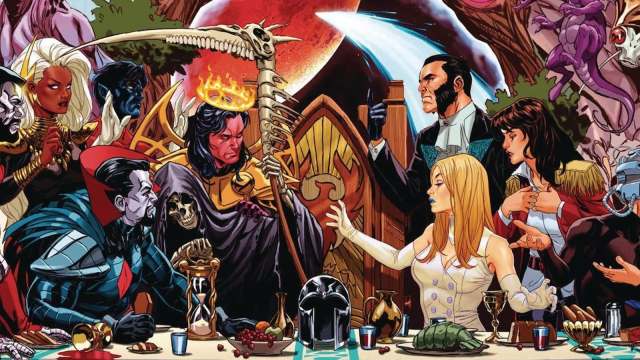 The newest Disney Plus series to be set in the Marvel Cinematic Universe, Ms. Marvel, just dropped a major hint about the MCU’s future. The sixth and last episode of Ms. Marvel had Kamala (Iman Vellani) finally take up the mantle of Ms. Marvel, and Bruno (Matt Lintz) had something he needed to tell her before he left for Caltech.

After testing Kamala’s genetic makeup against her brother Aamir’s (Saagar Shaikh), Bruno found that her genetic makeup was mutated. As he told her a riff of a familiar theme played, the theme of the X-Men animated series, which is soon to be used in X-Men ’97, and was also played in Doctor Strange in the Multiverse of Madness when Professor Charles Xavier was onscreen.

The revelation that Kamala’s Inhuman comic book backstory has seemingly been retconned for the MCU, making her a mutant instead will certainly shake up the MCU. Who knows just how many mutants are already in the MCU, or which Marvel characters they may choose to make mutants in future MCU projects? One thing is for sure, more mutants are going to start to be introduced in the MCU, so here are ten Mutants we would love to see first.

Namor might be the next mutant we get in the MCU as he is already heavily rumored to appear in a Phase Four film, Black Panther: Wakanda Forever. Often referred to as Marvel’s first mutant, Namor the Sub-Mariner was created in 1939 by writer and artist Bill Everett. The rumored casting for Namor is Tenoch Huerta, and with the MCU introducing Wakanda it seems like a great time to feature their neighbors, Atlantis.

Namor was actually retconned to be a mutant after Marvel rebranded the character to make him more appealing and to cash in on the mutant craze at the time. He has the ability to swim extremely fast, along with superhuman speed, strength, and longevity, plus he can fly. It’s not clear if he’s going to be in Black Panther: Wakanda Forever yet, or if the MCU will keep the mutant aspect of his character, but we’d love to see Namor in the MCU soon.

We’d like to see one of the mutants with the strangest origins join the MCU soon, Alison Blaire, aka Dazzler. Originally conceived by a record label, Dazzler was created as a multimedia collaboration between comics, music, and film. Unfortunately, the music and film projects never left the development stages, but Dazzler in Marvel Comics is one of the most popular mutants.

Dazzler was created in 1979 by Tom DeFalco, John Romita Jr., and Roger Stern, first appearing in X-Men #130. The character was originally supposed to be a disco performer – which is evident from her early costumes – but as time went on she performed different genres of music. While she is a member of the X-Men and has the power to turn sound into light, her stardom in Marvel Comics makes her famous as a celebrity rather than a mutant. So maybe some of the younger characters in the MCU could go see one of her concerts.

Angelica Jones is Firestar, the mutant who first appeared in a Spider-Man cartoon, Spider-Man and His Amazing Friends. Her first appearance in Universe 616 in the comics was in Uncanny X-Men #193 in 1985, which was written by Chris Claremont with pencils by John Romita Jr. Firestar possesses the ability to manipulate radiation.

The reason it seems plausible for this character to appear in the MCU is that Firestar has been romantically linked with Spider-Man a few times. With the entire MCU forgetting Spider-Man’s true identity, it seems like a good time for Peter Parker to move on in college. Maybe Firestar, who is a hero herself, would be a good choice for a love interest for Peter in the next Spider-Man film, whenever that may be.

Dr. Nathaniel Essex, later known as Mister Sinister, was created by Chris Claremont and Marc Silvestri and first appeared in Uncanny X-Men #221 in 1987. While Essex himself was not a mutant in the comic books, somewhere along the production line some of his clones developed the mutant gene. As they start to introduce mutants, the MCU could introduce Mister Sinister as a genealogist.

His comic book origins are tied to the villain Apocalypse and it is extremely doubtful that Apocalypse would be one of the first mutants to be introduced. Therefore, if the MCU did introduce Mister Sinister, they would probably overhaul his origins, but that might be for the best.

One of the most interesting mutants we would love to see in the MCU is the master of magnetism, Magneto. Magneto was created by Stan Lee and Jack Kirby and first appeared in X-Men #1 in 1963. Of course, we’ve already seen Magneto in the Fox X-Men films as Erik Lensherr was played by both Sir Ian McKellen and Michael Fassbender in those movies.

Magneto’s placement in the MCU would be very interesting as they have already introduced his children from the comics, Scarlet Witch and Quicksilver. As we have already seen their parents in the MCU and they seem to be dead, they might not make Magneto their father. On the other hand, they have explained away other plot holes before, so maybe the twins were adopted, or Wanda might just get away with some multiversal shenanigans.

Speaking of Magneto, he has another daughter who has not appeared in any of the Fox X-Men films, Lorna Dane, aka Polaris. Created by Arnold Drake and Don Heck, Lorna first appeared in X-Men #49 in 1968. She also has the power to control all things magnetic, like her father.

Like her father, it would be great if we could get Polaris into the MCU as well. After all, Wanda’s main source of grief is the lack of a family, a long-lost sister and father could make up for that. It could be a while before we see Wanda again, so seeing Polaris so soon might be a pipe dream, but we would love it.

Another mutant who might show up in the MCU soon is Typhoid Mary. Typhoid Mary was created by Ann Nocenti and John Romita Jr. in Daredevil #254 in 1988. Primarily a villain of Daredevil, Mary eventually married Wilson Fisk in the comics. Her mutant abilities are telekinesis and pyrokinesis.

The reason we want to see her in the MCU is because of her connections to various Marvel characters, including Daredevil, Kingpin, and Spider-Man. Unfortunately, we do not know how much, if any, of Netflix’s Marvel television series are canon to the MCU yet, even though Daredevil and Kingpin have both returned to the MCU and will return again in Echo. Typhoid Mary was already in Iron Fist, played by Alice Eve, so if they decide to pick and choose what they make canon, we might see her — or a different version of the character — again.

Everyone’s favorite merc with a mouth, Deadpool is bound to come into the MCU sooner rather than later. Wade Wilson was created by Fabian Nicieza and Rob Liefeld in 1991, first appearing in The New Mutants #98. There have been two Deadpool films so far, with Ryan Reynolds playing the titular character. But now that Fox is owned by Disney, we will be getting a film with Deadpool in the MCU.

Of course, we have heard whispers of Deadpool 3 being in the early stages of production, with the writers confirming that the film will have a “fish out of water” story. With Deadpool already being established, we’d love the see Ryan Reynolds drop into the MCU sometime soon.

Betsy Braddock has taken a few different names as a hero over the years, including Captain Britain and Psylocke. Betsy was first introduced in Captain Britain #8 in 1976 and she was created by Chris Claremont and Herb Trimpe. Betsy’s mutation gave her the ability of telepathy and she was also a great martial artist.

The reason we could see her introduced in the MCU ahead of some of the other mutants is because of Eternals. Eternals introduced Dane Whitman (Kit Harington) who — based on the film’s post-credits scene — is set to become the Black Knight. In the comics, Captain Britain associates with the Black Knight, and while she sometimes goes by Captain Britain, Betsy’s brother Brian was the first one to take that name. Nevertheless, we could see the three of them in an upcoming Marvel project.

Ororo Munroe is a mutant we would love to see in the MCU. Also known as Storm, Ororo has the mutant ability to manipulate the weather. She was created by Len Wein and Dave Cockrum, first appearing in Giant-Size X-Men #1 in 1975. The character appeared in some of the Fox X-Men films, played by both Halle Berry and Alexandra Shipp.

There are many other mutant characters we also want to see in the MCU, like Phoenix, Cyclops, Wolverine, and maybe even a different version of Professor X. We do not know who the next mutants to arrive in the MCU will be and we don’t know when they might arrive, but one thing is for sure, we are all very excited.