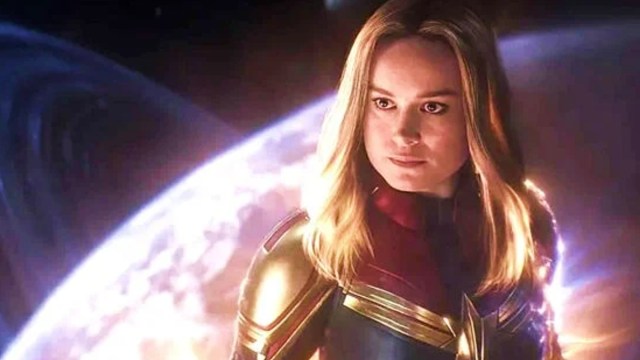 Brie Larson became a household name after starring as Carol Danvers, AKA Captain Marvel, in the 2019 Marvel film. Even though it was hailed for being Marvel’s first solo female superhero movie, Larson was unfortunately not showered with the same level of love and accolades. The actor was targeted for months when self-proclaimed Marvel fans photoshopped smiles over her face as they thought that the actor was too stiff and rigid for a superhero.

Some of the more outrageous criticisms called her physique into question, stating that she wasn’t strong enough to play the role of a superhero. The attacks have continued to this day and as a result, Larson has recently expressed her doubts about appearing as Captain Marvel in the upcoming movie, The Marvels. As the history of catcalling and trolling seems to have impacted the actor’s decision to pull back from appearing as her signature character, let’s discuss fans’ opinions and most importantly, how it shaped her decision.

“I don’t know. Does anyone want me to do it again?” https://t.co/lyxUEr5y6V pic.twitter.com/sz78oVWKBD

Appearing at D23, the cast of The Marvels introduced the first footage from the movie. Present at the event were Ms. Marvel’s Iman Vellani, WandaVision’s Teyonah Parris, and Captain Marvel’s Brie Larson, along with director Nia DaCosta. As per Comicbook.com, the new footage focuses on the meeting between Kamala Khan and Carol Danvers and what follows after.

Larson spoke out on stage about how nice it was for her to be surrounded by her teammates. She said, “It was really nice to have a team, I had a team”. Responding to Variety to the question of how long she would want to play Captain Marvel, she replied, “I don’t know. Does anyone want me to do it again?” When the interviewer asked her to be less modest about her response, she responded with a rather serious tone, “I don’t know. I really don’t have the answer to that.”

Her answers make it clear that the “fans” and bullies have probably continued to hold on to their beliefs about Larson’s inefficiency as a Marvel superhero. People still don’t want her to play Captain Marvel because of their lingering perceptions about her inability to contribute to the legacy of the MCU.

Yes, it is true that nothing specifically snarky has made it to the headlines to evoke that kind of a response from the actor, but it is quite certain that the Room star has been carrying the baggage of the criticisms and humiliations for quite a while now.

at this point brie larson cannot even breathe in peace because mysoginists will jump on her for no reason https://t.co/JSlLZWHfwe

The way that all Brie Larson does is exist, and it pisses off men is so powerful and sexy of her actually https://t.co/IhWXVvptdG

There are some who have churned-out tweets that showcase a toxic, sexist mindset.

This really does break my heart man. I love captain marvel and i love brie Larson. I hope she knows how many people love her pic.twitter.com/x9sBSSIsDE

While others just want to see her as the most charismatic female superhero again.

While the whirlpool of reactions and criticisms continues, here’s hoping to seeing all the Marvel women collaborate to shut the haters up.