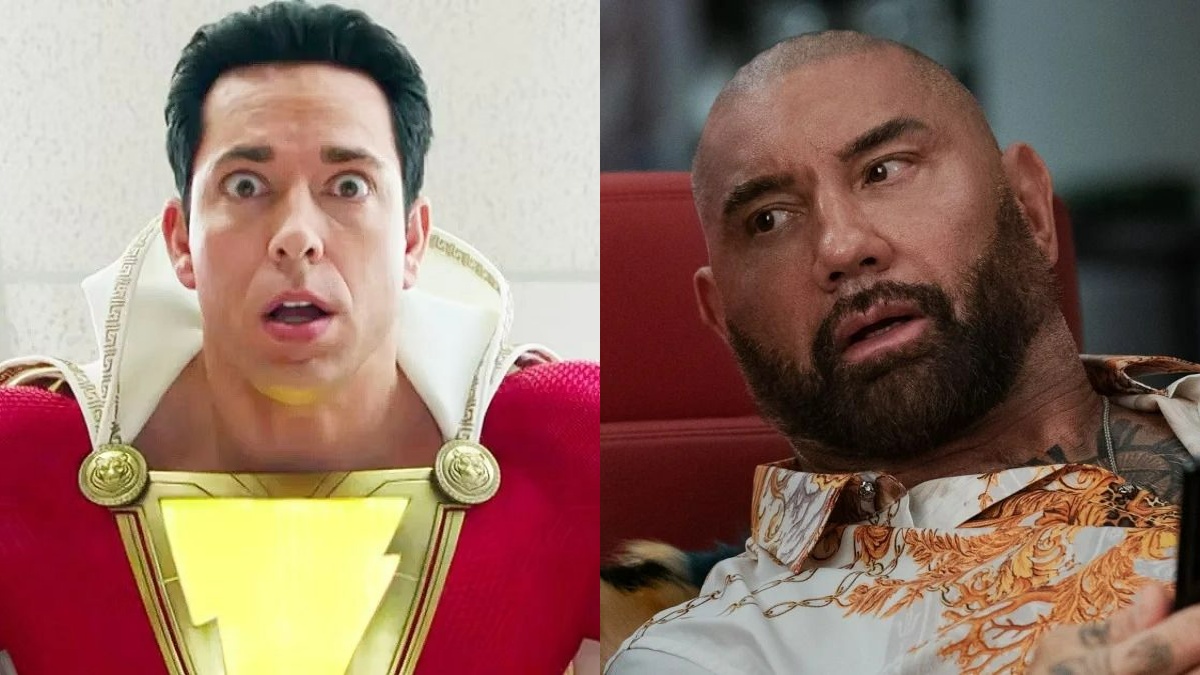 After the hierarchy of power changed for real, we won’t be seeing Dwayne Johnson as Black Adam again in the DC universe anytime soon, and no one is more bummed about that than Zachary Levi. For years now, the Shazam! star had been voicing his excitement over getting the chance to “punch The Rock in the face” one day, but now that dream is never to come to pass. And yet Levi shouldn’t despair as there might be an even better choice for his ultimate DC arch-foe.

Although Johnson was always more interested in teeing up a showdown with Henry Cavill’s Superman, the original plan was to have Billy Batson and Teth-Adam face off in Shazam! 3. Thanks to Levi’s friendship with new DC Studios chiefs James Gunn and Peter Safran likely ensuring he’ll outlive most of the Justice League in the franchise, there’s still a good chance Shazam! 3 will happen, which means that he’ll be in need of a new enemy for the threequel. Enter Dave Bautista.

Bautista is well and truly done with the MCU at this point, but his own pally relationship with Gunn means the door to the DCU is wide open for him. There are many potential roles for the Glass Onion actor in this rival superhero universe, but seeing as Shazam is crying out for someone of Johnson’s stature to duke it out within his next movie, there would be no one better to step into that role than Bautista. Shazam’s comic book history even provides the perfect role for him.

Ibac is one potential contender, but the character of a criminal who gains the abilities of Shazam would be too similar to Black Adam‘s Sabbac to really warrant an adaptation right now. Instead, let’s have Bautista play King Kull, one of the hero formerly known as Captain Marvel’s oldest enemies. The ruler of the barbaric, prehistoric Beast-Men, Kull is not only a hulking brute he’s also possessed of a genius intellect, making him like a blend of Conan the Barbarian and Bautista’s beloved Bane.

Superhero cinema is obsessed with ancient, hidden kingdoms right now, from Black Panther: Wakanda Forever to the upcoming Aquaman and the Lost Kingdom, so Shazam! 3 featuring Kull and his race of primitive yet technologically advanced Beast-Men feels like a real possibility. And if the filmmakers think Kull isn’t enough of a sell on his own, they could always borrow a genius idea from the Batman: The Brave and the Bold cartoon, which combined Kull with the more iconic villain Vandal Savage.

The fact that we won’t have that promised Shazam vs. Black Adam fight (nor the even grander Shazam vs. Black Adam vs. Superman mega-match) is somewhat disappointing, but Shazam! 3 still has the potential to be the most thrilling of the trilogy, if only Gunn hires Bautista to step into The Rock’s shoes. Hey, punching him in the face instead has got to be just as much fun for Levi, right?

Shazam! Fury of the Gods opens in theaters on March 17.