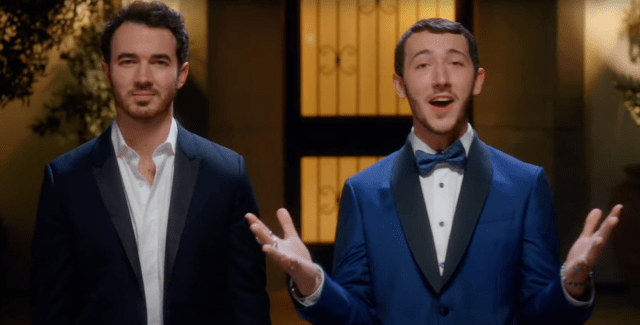 Frankie Jonas may not want to ride his famous brothers’ coattails to fame, but he isn’t above using a little “Cool Uncle” comedy bit on social media to boost his TikTok follower count. But Frankie may not be spotlight-adjacent for very long, thanks to his newest gig.

The two sibs recently appeared on The View to discuss their latest effort; co-hosting ABC’s newest reality competition show, Claim to Fame. View host Whoopi Goldberg’s grandchild, Amara, will compete on the program, which features 12 contestants each of whom possesses a famous relative. The competitors will seek to preserve the secret identity of their famous relationship throughout the run of the show. The winner gets a final grand prize of $100,000 if they’re able to guess which celebrity is related to which guest.

“The entire house was art-directed, so every single item in the house could be a clue to someone’s celebrity relative,” Kevin told the panel. Objects could lead contestants to the truth or “down the wrong rabbit hole,” as they try to figure out their fellow contestants’ secrets.

Frankie can lend a unique perspective to his duties on the show as the (for now) less-famous sibling of not just one, but three wildly successful brothers. When asked by View co-host Sunny Hostin how much of their own sibling dynamic will be seen on the show, Frankie replied, “I think coming into the show, Kevin ⏤ he’s hosted before and he’s bringing so much of that hosting experience ⏤ and I haven’t hosted a lot, but I’m bringing my experience as being the younger brother. I’m bringing a lot of me. And we just had fun.”

While Frankie isn’t exactly a complete stranger to celebrity spotlights for his own achievements — he won a Teen Choice award for his appearance in The Jonas Brothers’ Disney Channel series in 2009, for example — he’s probably best-known to his Gen Z peers for his TikTok account, which has over a million followers. One of his videos shows him taking part in the “sometimes we throw stuff at Kevin” trend and convincing his nieces to hurl a piece of lunch meat at their dad, Kevin.

Frankie explained to Hostin that this mimics the family’s real-life dynamic; loving, but not afraid of the occasional prank or roast. Even if you’re the youngest. “I think it’s because I, you know, I’m not afraid to throw some salami on Kevin in that video you just saw. I think, you know, we just have fun, and I think that in our family, we like to just, we like to make fun of each other and there’s so much fun in our house.”

Claim to Fame premieres tonight on ABC, and will be available for next-day streaming on Hulu.