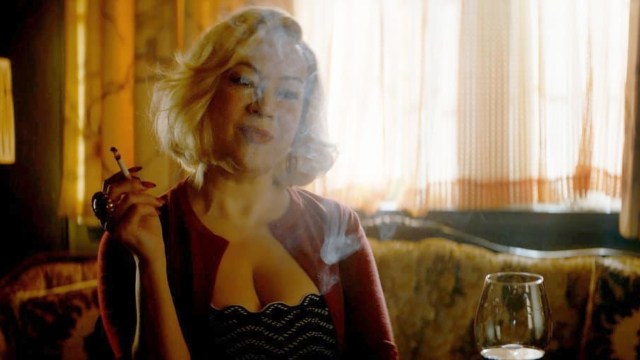 When it dropped on Syfy and the USA Network last October, Don Mancini’s Chucky series was the hottest thing on television. Brad Dourif reprises his role as Chucky in Mancini’s horror series, which serves as a continuation from the seventh film in the Child’s Play franchise: Cult of Chucky. Alongside Dourif as the voice of Chucky, the series stars Zackary Arthur, Teo Briones, Alyvia Alyn Lind, and Björgvin Arnarson, with Fiona Dourif, Alex Vincent, Christine Elise, and Jennifer Tilly reprising their roles from the previous Child’s Play films.

After an official announcement revealing the return of Glen/Glenda made its rounds on the internet and generated buzz amongst the Chucky fans, the dedicated following has taken it upon themselves to patiently wait for any crumb of development surrounding the series, including social media uploads from its stars. Jennifer Tilly, a long-time fan favorite known for portraying Chucky’s demented girlfriend Tiffany Valentine, uploaded a BTS image to Twitter featuring Tiffany in her bedroom, surrounded by various accolades and film posters — symbolic of the “real” Jennifer Tilly.

Tilly is known for leaking details about Chucky since she seems to be the most active cast member in terms of an online presence. She captioned the tweet, “Hanging out in “my” bedroom on the set of #ChuckySeason2.”

Sporting a slim-fitting, flower-covered bodycon dress, Tilly poses next to violet-colored furniture with a backdrop of trophies and posters, one of which is the theatrical release poster for Bound, a crime/thriller starring the femslash pairing of Jennifer Tilly and Gina Gershon as the gang banging duo Violet and Corky, respectively, and the other is a photoshoot print — a callback to Tilly’s modeling days in the ’80s.

Chucky 2 is set to premiere in fall 2022, but hopefully, there’s many more spoilers in store for us Chucky fans — especially with Tilly’s shameless promotions.