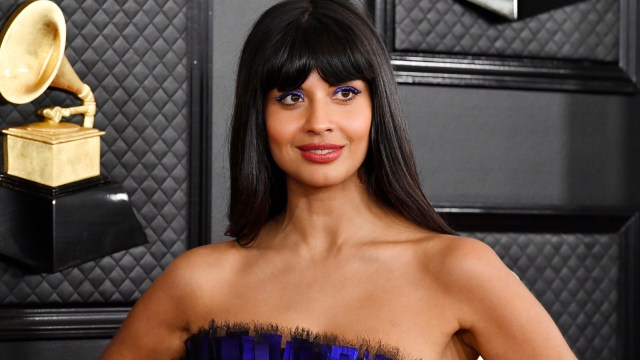 She-Hulk: Attorney at Law is set to introduce Jennifer Walters into the MCU at long last, with Tatiana Maslany bringing the Jade Giantess to life. While the marketing for the show has emphasized the familial dynamic between Jen and her cousin Bruce Banner (Mark Ruffalo), Shulkie will also find herself a nemesis in the legal comedy series in the form of Titania, as played by The Good Place‘s Jameela Jamil.

Our few glimpses at Jamil in costume as Titania so far have given way to a lot of grumblings from fans as the MCU’s version of the character seems to be much removed from the more fearsome villain from the source material. But Jamil isn’t standing for any slander against either herself or the role she’s portraying on the show.

The actress took to Twitter yesterday to share a Titania selfie, which led one ill-mannered “fan” to respond, “Please don’t screw this up. Read some comics. Learn your character.”

Jamil, somehow restraining herself from digitally hulking out in anger, hit back against the complainer in a admirably measured way. “It’s already shot,” he said. “I know everything about my character from the comics. The writer has written her own unique version. My job is to bring that to life.”

This critic was the rudest responder to another exchange Jamil had with a fan that caused some confusion among her followers. One Twitter user asked the actress if she was playing Titania “the X-Men member” to which she replied, “I KNOW!!!!” This user later explained they had gotten mixed up between Titania the villain and Rogue, who is known as Titania in the Latin-American dub of X-Men: The Animated Series.

Jamil clearly made an innocent, spur-of-the-moment mistake when getting excited about her role with this fan, so anyone accusing her of knowing nothing about her character is obviously way out of line. Think before you tweet, people.

From showrunner Jessica Gao (Rick and Morty), She-Hulk punches its way onto Disney Plus from Aug. 17.